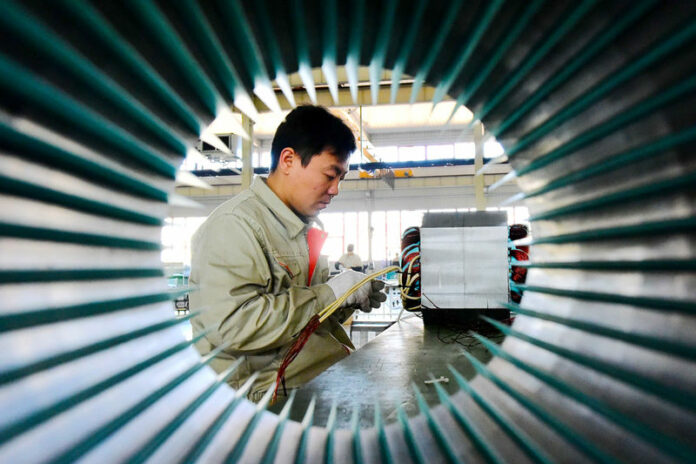 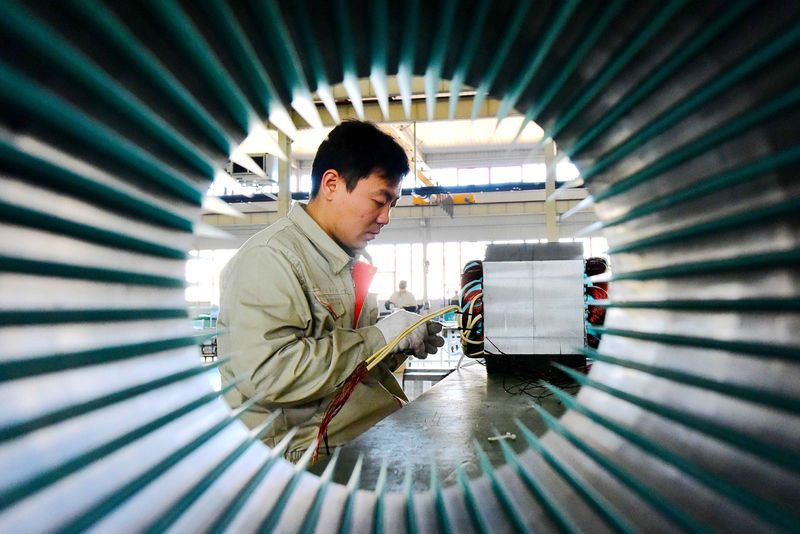 © Reuters. Man works on electric machine parts at a workshop of an equipment manufacturing company in Weifang, Shandong

TOKYO (Reuters) – Weak demand in China and growing global fallout from the Sino-U.S. trade war took a heavier toll on factories across much of Asia in February, business surveys showed on Friday.

Activity in China’s vast manufacturing sector contracted for the third straight month, pointing to more strains on its major trading partners and raising questions over whether Beijing needs to do more to stabilize the slowing economy.

In many cases, business conditions were the worst Asian companies have faced since 2016, with demand weakening not only in China but globally.

“The weakening trend in Chinese import demand weighed heavily on exports across the rest of the region,” said Sian Fenner, lead Asia economist at Oxford Economics.

“We expect exports to remain under pressure,” Fenner said.

In China, both private and official factory gauges showed activity levels remained mired near three-year lows, with a government reading on Thursday pointing to the weakest export orders since the global financial crisis.

While there was a marginal pick-up in domestic orders in China, analysts said it was too early to tell if it was due to

growth-boosting measures announced by Beijing in recent months or seasonal distortions linked to the long Lunar New Year holidays early in the year.

“The upshot is that it is probably too soon to call the bottom of (China’s) current economic cycle,” Julian Evans-Pritchard, senior China economist at Capital Economics, wrote in a note after the survey. “Indeed, we expect growth to continue to come under pressure until the middle of this year.”

China watchers are looking to Premier Li Keqiang’s work report to the annual meeting of parliament next week for clues on further stimulus plans. Li will set out the government’s economic targets for the year on Tuesday.

Sources have told Reuters Beijing will set a 2019 growth target of 6.0-6.5 percent, down from around 6.5 percent in 2018. China reported economic growth cooled to 6.6 percent last year, its weakest pace since 1990, but some analysts believe actual activity is much weaker.

For most of Asia, however, the parliamentary session may be largely overshadowed by headlines from U.S.-China talks aimed at ending their costly trade war.

The United States will need to maintain the threat of tariffs on Chinese goods for years even if Washington and Beijing strike a deal, President Donald Trump’s chief trade negotiator told lawmakers on Wednesday.

That could point to further collateral damage for Asia’s other export powerhouses Japan, South Korea and Taiwan.

In Japan, the Markit/Nikkei Manufacturing Purchasing Managers Index (PMI) fell into contraction territory as both domestic and foreign orders slumped.

“We need to be mindful that uncertainty over the global economic outlook is heightening,” Bank of Japan board member Hitoshi Suzuki said on Thursday, after data showed the biggest drop in industrial output in a year in January.

Readings from South Korea — the first economy in Asia to report trade data each month – were equally grim. Its exports contracted 11.1 percent in February from a year earlier, their biggest drop in nearly three years, with shipments to major buyer China slumping 17.4 percent.

Factory activity in Vietnam also slipped to the lowest level since March 2016. While output and new orders saw faster growth, an index on employment fell for the first time in almost three years.

India bucked the trend, with activity expanding at the fastest pace in over a year. The findings came a day after data showed Asia’s third-largest economy grew much less than expected in the final quarter of 2018.

As the trade war drags on, the fallout is extending beyond business sentiment and starting to hit corporate bottom lines.

AAC Technologies Holdings Inc, a Hong Kong-listed acoustic component supplier to Apple Inc (NASDAQ:), warned that it expected first-quarter net profit to fall as much as 75 percent due to reduced orders.