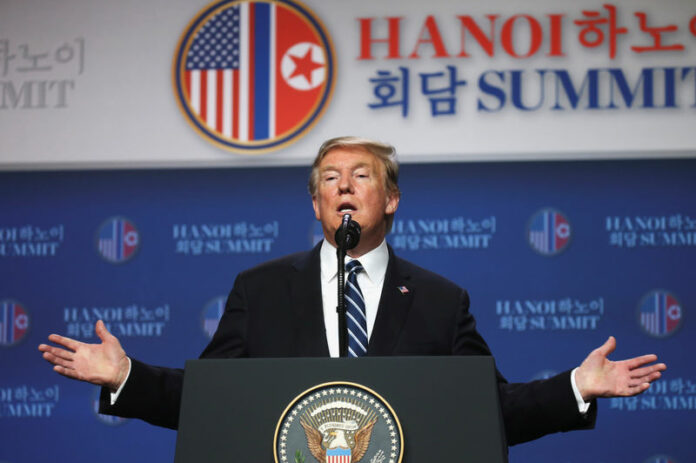 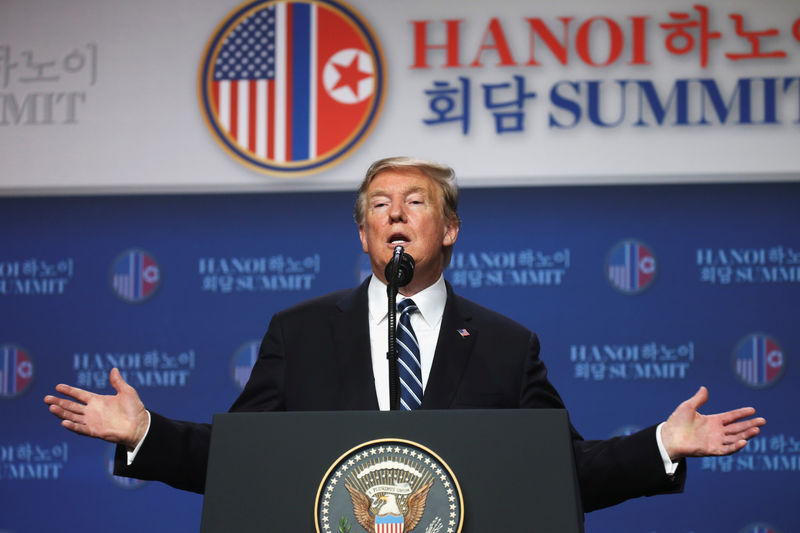 WASHINGTON (Reuters) – U.S. President Donald Trump on Thursday warned he could walk away from a trade deal with China if it were not good enough, even as his economic advisers touted “fantastic” progress toward an agreement to end a dispute with the Asian country.

The United States and China have imposed tit-for-tat tariffs on hundreds of billions of dollars worth of each others’ goods, roiling financial markets, disrupting manufacturing supply chains and shrinking U.S. farm exports.

“I am always prepared to walk,” Trump said in Hanoi, after cutting short a summit meeting with North Korea’s Kim Jong Un that failed to reach a nuclear deal. “I’m never afraid to walk from a deal. And I would do that with China, too, if it didn’t work out.”

The United States had been poised to hike tariffs on some $200 billion in Chinese imports to 25 percent from 10 percent after Friday if no deal was reached by then. But on Sunday, Trump announced that he would delay the hike in duties due to progress in negotiations with Chinese officials last week.

Since then, Trump administration officials have offered few details on the discussions.

“We are heading toward a remarkable, historic deal,” he added.

Kevin Hassett, chairman of the White House’s Council of Economic Advisers, was similarly upbeat, saying on Fox Business Network that Lighthizer and Chinese Vice Premier Liu He drafted “sketches of an agreement on intellectual property theft and trade … that really makes sense for both parties.”

“If you look at the paperwork we’ve got and the line-by-lines that people have sketched out, it’s just about as favorable as you could hope for,” Hassett said, adding that final details would need to be approved by Trump and Chinese President Xi Jinping at a meeting at Trump’s Mar-a-Lago estate in Florida.

Lighthizer, Trump’s chief trade negotiator, on Wednesday was more cautious about the negotiations in testimony to the House Ways and Means Committee, saying much more work needed to be done to nail down an agreement and it was too soon to predict the outcome of talks.

He also said the United States would need to maintain the threat of tariffs on Chinese imports for years, even if the two countries strike a deal, a gloomy prospect for companies seeking to end trade war uncertainty.

Lighthizer had said the United States is seeking an agreement that prohibits China from competitively devaluing its currency as part of trade talks, following past manipulations of the yuan.

“The documents are very clear: I mean, even things like the currency deal … got no manipulation; they’ve got to report any interventions in the market. That’s part of it,” Kudlow said.

His comments came as the United States won a World Trade Organization ruling that China’s domestic price supports for wheat and rice were excessive and violated WTO obligations.

Trump administration officials have frequently criticized the Geneva-based WTO for its inability to rein in China’s trade practices and non-market economic policies.