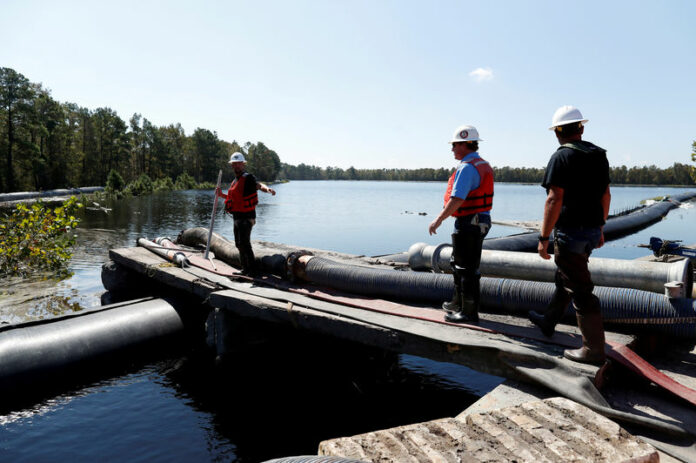 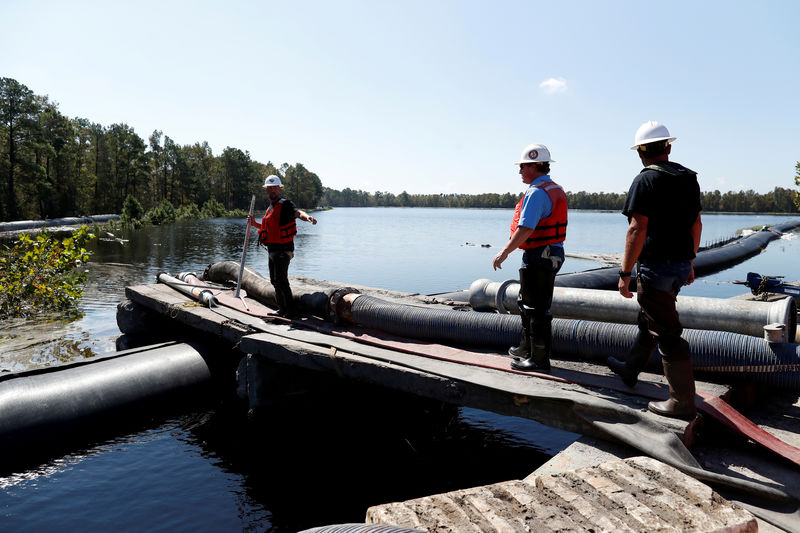 © Reuters. FILE PHOTO: Santee Cooper workers check the water levels around a 6000 foot long Aqua Dam built to keep sediment from a coal ash retention pond from going into the flooded Waccamaw River in the aftermath of Hurricane Florence in Conway

WASHINGTON (Reuters) – More than 90 percent of U.S. coal-fired power plants that are required to monitor groundwater near their coal ash dumps show unsafe levels of toxic metals, according to a study released on Monday by environmental groups, which cited the potential harm to drinking water.

The groups, led by the Environmental Integrity Project and Earthjustice, said their findings show that stronger regulations are needed for coal ash.

Data made public by power companies showed that of the 265 plants subject to the monitoring requirement, 241 – or 91 percent – showed unsafe levels of one or more coal ash components in nearby groundwater compared to EPA standards, according to the analysis by the groups.

The environmental groups reviewed data reported from 4,600 ground water monitoring wells near coal ash dumps of two-thirds of the coal-fired power plants in the United States.

Coal ash, which is the residue produced from burning coal in coal-fired plants, is stored at hundreds of power plants throughout the country. Spills in Tennessee and North Carolina leached sludge containing toxic materials into rivers in those states over the last decade.

In response, the Obama administration in 2015 established minimum national standards for the disposal of coal ash, including a requirement that companies monitor groundwater and publish their data.

According to the U.S. Environmental Protection Agency’s website, coal ash contains contaminants like mercury, cadmium and arsenic, which “without proper management” can pollute “waterways, groundwater, drinking water and the air.”

Amid strong pressure from utility and coal companies, the EPA last July revised the 2015 rule to suspend groundwater monitoring requirements at coal ash sites if it is determined there is no potential for pollutants to move into certain aquifers.

The rule also extended the life of some coal ash ponds from early 2019 to late 2020.

Because contaminated groundwater can potentially harm drinking water, the environmental groups’ report said the data shows that stronger regulations are needed for coal ash. The coal ash rule does not require tests of local drinking water.

“By weakening cleanup standards and pushing back ash pond closure deadlines, Trump’s EPA is endangering communities and ecosystems near these toxic waste sites,” the report said.

The EPA was not immediately available for comment by its administrator, Andrew Wheeler.

Wheeler, who last summer was the EPA’s acting head and who was confirmed as the agency’s administrator by the Senate last week, said last July that EPA’s revised coal ash rules would “save tens of millions of dollars in regulatory costs.”