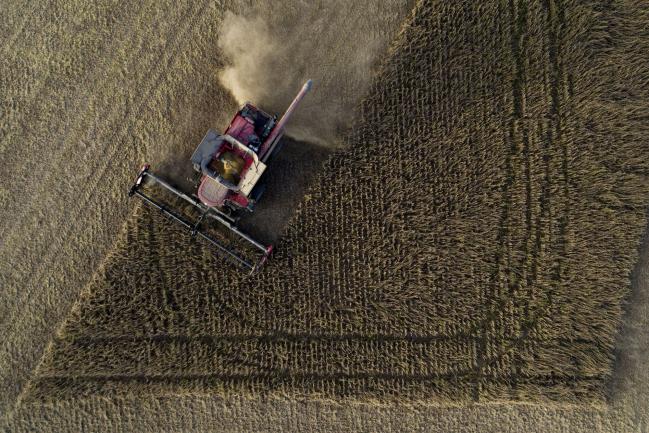 © Bloomberg. Soybeans are harvested with a Case IH Agricultural Equipment Inc. combine harvester in this aerial photograph taken above Tiskilwa, Illinois, U.S., on Thursday, Sept. 27, 2018. Having all three North American countries agree on a trade deal has given traders and farmers reassurance that some flows of agricultural goods won’t be disrupted, particularly to Mexico, a major buyer of U.S. corn, soybeans, pork and cheese. Photographer: Daniel Acker/Bloomberg

(Bloomberg) — President Donald Trump says he’s asked China to immediately remove all tariffs on U.S. agricultural products in what could be a huge blessing for American farmers. But how will global trade flows change in the event of a deal?

The most obvious impact will be on Brazil and Argentina, which were among the biggest winners of the trade war, as their soybeans in China displaced the U.S. Should the Asian nation dump its 25 percent retaliatory tariffs on soy — America’s biggest agricultural export to China before the trade war — their big advantage will fade.

But should China follow through on an offer to buy an extra $30 billion a year in American farm products, a raft of other countries could see sales to the world’s biggest commodity buyer decline.

Canada may see shipments of rapeseed and wheat shrink, while Australia could find China is less keen to buy its beef and cotton. The U.S. Department of Agriculture’s Chief Economist Robert Johansson identified livestock products as a key area for potential exports to China. Meanwhile, Australia’s agriculture minister has warned that any deal that’s unfair to other nations could end up at the World Trade Organization.

“Farm products are among the few options China has to help balance trade with the U.S.,” said Zhong Funing, a professor at the International Research Center for Food and Agricultural Economics at Nanjing Agricultural University. “We have to import more U.S. farm products while sacrificing other markets.”

While a deal is yet to be made, the two nations are close, two people familiar with the discussions said. The new target could see annual U.S. agriculture exports to China rise to about $55 billion to $60 billion, achievable in about three years, according to Rabobank International. That’s up from $24 billion in 2017. China’s commerce ministry didn’t reply to a fax seeking comment.

Here’s a look at the potential implications of a trade deal between the U.S. and China from an agricultural markets perspective:

The biggest impact by far is likely to be on soybean suppliers. China imported 88 million metric tons of soy last year, valued at $38 billion, with Brazil overtaking the U.S. as the dominant supplier.

If a deal is made, the share for U.S. soybeans could “easily” increase to over 50 percent from 34 percent in 2017, representing about $20 billion to $25 billion worth of purchases, Rabobank said.

In terms of market impact and trade flows, Oscar Tjakra, a senior analyst for grains and oilseeds at Rabobank, said U.S. soy prices will rise and buyers outside China “would almost exclusively turn to cheap South American supplies.” It may also encourage American farmers to plant more soybeans, he said.

U.S. soy prices would effectively decouple from the rest of the world, and premiums for Brazilian soy would also fall, according to Tarso Veloso, an analyst at Chicago-based consultants AgResource. “Although Brazilian soy for April onward is cheaper, the commitment to buy American beans will heat up U.S. demand,” he said.

Aside from soybeans, a whole list of cereal grains including corn and corn-product ethanol, wheat, barley, sorghum, distiller dried grains and rice could end up in China’s shopping cart.

The U.S. is pushing China to fill tariff-rate quotas for wheat, corn and rice it pledged to import under WTO agreements. The U.S. says China has fallen short of this commitment, which includes 7.2 million tons of corn and 9.64 million tons of wheat. Rabobank says China could buy large quantities of U.S. feed grains, rising to 30 million tons within three years.

Canada and Ukraine could be hardest hit in the cereal aisle. Canada almost doubled its shipments to China last year, while Ukraine saw a 40 percent increase in sales. Australia, China’s biggest supplier of cereals, has already seen exports slide as it battles its own trade issues with the Asian country on commodities such as barley.

Meat may also be a key ingredient in the trade war deal, with America’s beef, poultry, lamb and fish suppliers potential winners, according to Arlan Suderman, Chief Commodities Economist at INTL FCStone Inc.

Brazil was China’s top supplier last year, selling almost 50 percent more meat than it did in 2017, while U.S. shipments tumbled by about the same amount. Meanwhile, Australia and Argentina also saw huge increases in sales to China.

For Marcos Jank, the head of Asia-Brazil Agro Alliance, an organization representing Brazil’s beef, chicken, pork, sugar and ethanol exporters, meat sales are a bigger concern for the Latin American country — even more so than its soybeans.

“If the U.S. gets full access to the Chinese market, it could potentially sell chicken at a lower price than Brazilian exporters,” Jank said. “The big question is not what China will do, but how.”

Lastly, China could go on an American cotton spree to supply its burgeoning textiles industry.

Despite the 25 percent retaliatory tariffs it placed on U.S. cotton, China imported $1.1 billion from the country in 2018, up 3.1 percent from 2017. But purchases from other suppliers grew faster, with Australian shipments jumping more than 80 percent while Brazil’s almost tripled. Now they face seeing a drop in sales because of the trade deal.

“This deal may represent the end of an era, where trade is based on competitiveness,” said Jank. It will be “the start of a new one system of “managed trade,” where geopolitical decisions determine trade flows.”