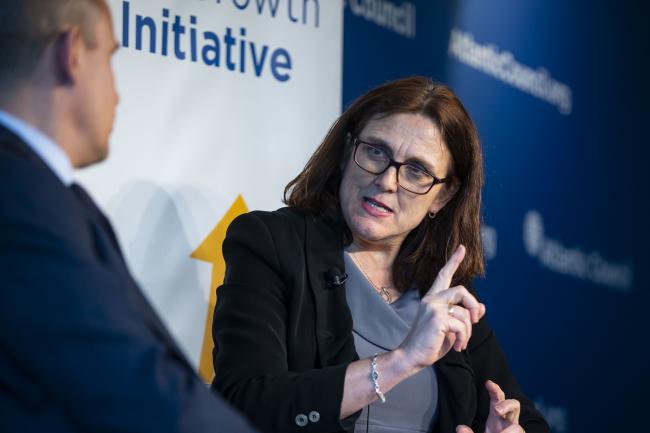 (Bloomberg) — European Union Trade Commissioner Cecilia Malmstrom urged the U.S. to negotiate removing tariffs on industrial goods, including vehicles, as a first step to rebuilding trust in their trade relationship before tackling thornier issues such as agriculture.

“There is a lack of trust at this moment and that is why we’re proposing instead of increasing tensions between us, instead of having these tariffs, instead of saying that Europe is a security threat to the American economy, OK let’s rebuild that trust,” Malmstrom said at an event at Georgetown Law School in Washington on Thursday.

“If we start with industrial goods, which is much less complicated and which will be beneficial for both sides, we maybe can rebuild that trust,” she said, adding there’s no appetite in the EU right for a full-blown trade agreement with the U.S.

Malmstrom said the EU is willing to discuss autos in the negotiations, but she repeated the bloc wants farm products kept out of talks. The EU still doesn’t have a negotiating mandate, but Malmstrom said she hopes official discussions will start “soon.”

The U.S. has also cited a lack of goodwill in the relationship as a hindrance to negotiations.

U.S. Ambassador to the EU Gordon Sondland last month blamed a lack of progress on Europe’s failure to follow through on commitments it made when European Commission President Jean-Claude Juncker and President Donald Trump agreed to new trade talks in July. At the time, Trump promised not to impose new tariffs while the discussions were ongoing.

The deteriorating relations come at a difficult time. The U.S. Commerce Department last month delivered its recommendations on whether Trump should slap tariffs on imported vehicles to protect national security. Trump used the same argument last year to hit steel and aluminum imports with duties, which led the EU to retaliate with its own targeted tariffs.

Malmstrom said U.S. Trade Representative Robert Lighthizer didn’t comment on those findings when she met him in Washington on Wednesday. The EU is “watching carefully” for the outcome, she said.

Trump, who has kept the report secret for now and doesn’t have to announce a decision until late May, has urged the EU to remove its 10 percent tariff for vehicle imports. The U.S. charges 2.5 percent on cars, and 25 percent on light trucks.

Trump has threatened levies of as much as 25 percent on foreign-made vehicles. Companies and governments from Europe to Asia have warned Trump that such tariffs would hurt the U.S. economy and disrupt the global auto industry.