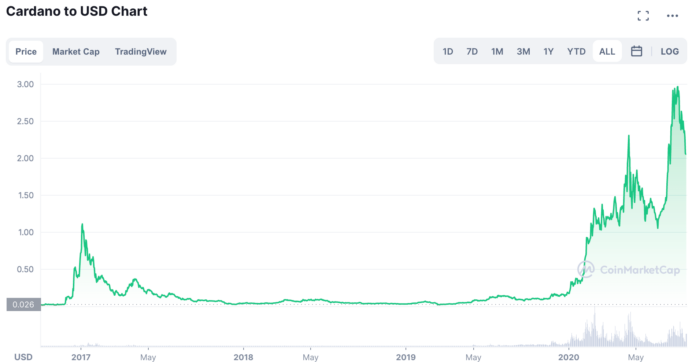 Ethereum: the second-leading cryptocurrency that has outperformed Bitcoin on a percentage basis in 2021
Cardano: an Ethereum rival
Solana could be another killer
Polkadot is also in the running
Ethereum and the killers comprise four of the top nine cryptos

The burgeoning cryptocurrency asset class reflects the game-changing evolution of fintech, a revolution that created a marriage between technology and the financial status quo.

At the core of this status quo is money, a key means of exchange. In biblical times, many commodities that had intrinsic value were currencies. The word “salary” comes from the Latin “sal” or salt. Soldiers in the Roman army were often paid with salt instead of other forms of money. The monthly allowance was “salarium.”

Gold and silver are a form of money or a means of exchange dating back to pre-biblical times. There are many references to precious metals in the old testament. Today, central banks and governments continue to hold gold as an integral part of their foreign exchange reserves, validating gold’s role in the worldwide financial system.

The world’s leading currencies derive their value from the full faith and credit of the countries that print the legal tender. Governments have the power to expand and contract the money supply to pursue economic and political goals. The saying “the love of money is the root of all evil” comes from 1 Timothy 6:10 in the King James Version of the bible. For national government’s control of money is a root of power. Since the cryptocurrency asset class operates independent of government control, and it is a threat to power.

While there is almost universal acceptance for blockchain technology, cryptocurrency tokens gaining acceptance is another story. The fastest and most efficient protocols are getting lots of attention. Ethereum (ETH) has been a leader, but Cardano (ADA), Solana (SOL), and Polkadot (DOT) are hot on Ethereum’s heels as established rivals. Some market participants are calling them the “Ethereum killers.” Ethereum and the killers are top-tier cryptocurrencies.

Ethereum: the second-leading cryptocurrency has outperformed Bitcoin on a percentage basis in 2021

When most people think about cryptocurrencies, it is Bitcoin that comes to mind. Kleenex may be the brand name of one company’s tissue product, but many call any tissue a Kleenex—the brand name has become the generic item. Similarly, Bitcoin has taken that position in the crypto asset class.

Ethereum’s ascent has come as the market began endorsing its faster and more efficient protocol compared to Bitcoin’s. Bitcoin uses a proof-of-work mining protocol, while Ethereum is moving to a proof-of-stake network.

Moreover, in a world focused on climate change and carbon footprints, Ethereum is far less energy intensive. Bitcoin is the granddaddy of blockchain, while Ethereum represents the evolution of the asset class’s revolutionary impact on financial markets.

Currently, technology is moving at the speed of light. Just a few short decades ago, few believed we would walk around with a powerful computer in the form of a smartphone in our pockets.

Three cryptocurrency protocols are hot on the heels of Ethereum these days. Some market observers have dubbed them the Ethereum Killers.

Ethereum has posted a more than 300% rise since the end of last year, but Cardano (ADA) has done significantly better. As of Sept. 22, ADA tokens were trading at the $2.04 level in fourth place with a market cap of $65.5 billion, at time of pubication the token has moved into third place—just behind Ethereum—trading at almost $2.30 per coin, for a market cap of $72 billion. The chart shows that ADA tokens closed 2020 at $0.1753. At the current level, the digital currency has moved a breathtaking 1214% higher.

As protocols, Cardano and Ethereum are similar. Both offer blockchains for custom programming logic or smart contracts and decentralized features.

However, Cardano and Ethereum use different blockchains. Many market participants believe Cardano’s provides more flexibility as it is a third-generation cryptocurrency, offering improved safety and scalability. Cardano’s website details the protocol that makes it an Ethereum rival.

Solana could be another killer Solana’s website claims it is the “fastest blockchain in the world and the fasted growing ecosystem.”

Polkadot is also in the running Polkadot’s claim to fame is all about scalability. Polkadot uses shards or ‘parachains’ that can process transactions in a parallel manner, allowing for more transactions per second compared to Ethereum.

Polkadot’s website says it is “on track to deliver the most robust platform for security, scalability, and innovation.”

Ethereum and the killers comprise four of the top nine cryptos

ADA, SOL, and DOT all offer unique benefits in their quest to unseat Ethereum as the second-leading protocol. The three are in the top nine of 12,037 cryptocurrencies as of Sept. 23.

The chart shows the three potential Ethereum killers currently have a combined market cap of $149.22 billion compared to Ethereum’s $370.30 billion.

The fast-moving asset class means that the crypto heirarchy can change positioning each day since price volatility can be head spinning. At the same time, fintech is still in its early days.

Even if ADA, SOL, or DOT manage to overtake Ethereum or even Bitcoin, there will be emerging protocols that deliver even more attractive functions over the coming months and years.

Meanwhile, with a market cap of over one-third of a trillion dollars, Ethereum has lots of life remaining even though the killers are looking to unseat the second-leading cryptocurrency.