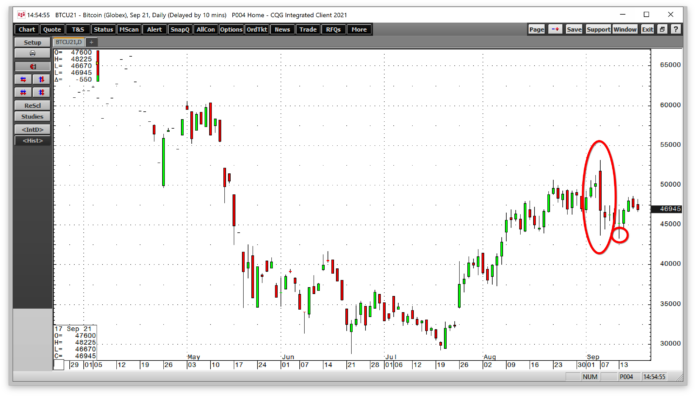 The U.S. SEC Gets Serious About Crypto Regulation; Bifurcation On The Horizon

The Coinbase Wells notice was a regulatory missile
SEC Chairman a fintech expert
Protecting the public or defending the status quo?
Money: the root of power
Expect levels of regulation; Bifurcation on the horizon

Regulation is a thorny issue for global assets and the markets in which they’re traded. Before the 2008 worldwide financial crisis, regulation in the commodities markets was not what it is today. Futures markets were regulated, and US market participants had to be careful when dealing abroad.

The Foreign Corrupt Practices Act of 1977 prohibits US citizens and companies from bribing foreign government officials to benefit their business interests. The Act put US commodity traders and raw material producers—as well as consumers—at a disadvantage to many other countries.

There is no division between the government and commodity production in many producing countries. So the only way to do business in many of those areas was to violate the Act, leaving the business in the hands of other market players, notably from China and other countries.

The Dodd-Frank Act tightened regulation beyond the futures market into physical swaps and other transactions. Over the past months, traders have been charged and convicted of spoofing as well as other offenses that are now white-collar crimes.

The regulatory umbrella has expanded over the past decades. It is only a matter of time before it throws shade over the burgeoning cryptocurrency asset class. Moreover, cryptos threaten one of the government’s critical power sources, the money supply.

We should expect regulation with a vengeance over the coming months and years. The higher the crypto asset class’s market cap rises, the faster the rules will appear. We just witnessed what could be the first shot across the bow when the Securities and Exchange Commission (SEC) sent Coinbase (NASDAQ:COIN) a letter warning them against rolling out a new crypto product.

The Coinbase Wells notice was a regulatory missile

On Sept. 7, the day El Salvador officially adopted Bitcoin as its national currency, the price of the leading cryptocurrency reached its most recent peak and reversed lower. 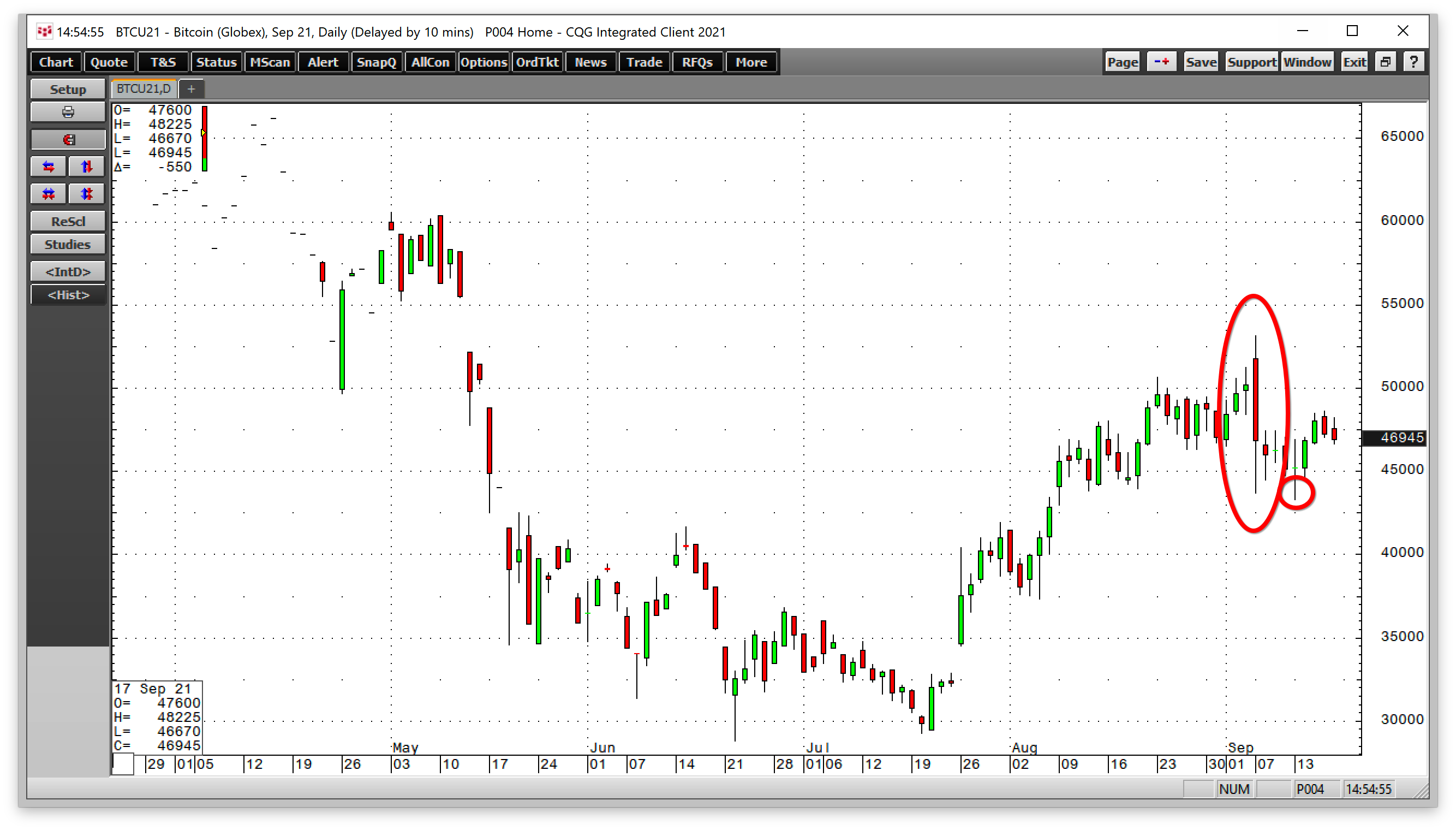 As the daily chart of September Bitcoin futures highlights, the leader of the crypto pack rallied to a short-term $53,125 high, reversed, and fell to a low of $43,704, putting in a bearish key reversal pattern on the daily and the weekly charts for the week of Sept. 7. Bitcoin followed through on the downside, making a lower low at $43,310 on Sept. 13.

One of the reasons Bitcoin dropped by 18.5% on Sept. 7 was that Coinbase, the leading cryptocurrency exchange, received a Wells notice from the Securities and Exchange Commission, informing that the SEC intends to sue COIN in court over its Coinbase Lend program. Lend allows customers holding crypto tokens to lend them to other market participants, creating a yield or interest rate for Bitcoin and other cryptos offered on the Coinbase exchange.

The Wells notice warned Coinbase that the company should think twice before rolling out its Lend program. Moreover, it was a regulatory missile at the asset class that transcends Coinbase.

SEC Chairman Gary Gensler is the former Commodities Futures Trading Commission Chairman. He presided over allowing the CME and other futures exchanges to list Bitcoin futures back in December 2017. While the listing came after his tenure at the CFTC, the application was considered during his term. As CFTC Chairman, Mr. Gensler seemed to embrace fintech and the cryptocurrency revolution.

Before he was appointed as the SEC chief, Gensler taught at the Massachusetts Institute of Technology. The subject was fintech. Cryptocurrencies and blockchain are the heart and soul of the evolution of the fintech revolution.

Some market participants logically believed that at the SEC, Chairman Gensler would be a crypto advocate. However, a political agenda could be trumping fintech’s evolution and acceptance.

Protecting the public or defending the status quo?

The SEC and other powers in Washington have stated they wish to protect the public from an unregulated cryptocurrency asset class. Many cite nefarious uses of cryptocurrencies, including their utility for hackers using ransomware to attack systems in the US and worldwide.

In 2021, we have already seen a hack at the Colonial Pipeline and the leading US meatpacking plant. The US government has expressed concerns that cryptos allow criminal forces to operate beyond their reach, creating risks for businesses and individuals.

The first regulatory missile came in the spirit of “protecting the public.” However, it is more a defense of the status quo.

Money: the root of power

For governments, money is the root of power. The ability to expand and contract the money supply became a lot easier after abandoning the gold standard. During the 2008 global financial crisis and the 2020 worldwide pandemic, governments dramatically expanded the money supply to stabilize the economy.

If cryptocurrencies were to replace fiat currencies, it would limit or end the government’s ability to address events using monetary policy. Ideologically, the crypto revolution is a challenge to the government’s control of money as the burgeoning asset class embodies a libertarian approach, returning power to individuals at the expense of governments.

The bottom line is that the SEC Wells notice sent to Coinbase could be the first missile in a government-sponsored war against the asset class for political instead of regulatory reasons.

Expect levels of regulation; Bifurcation on the horizon

I expect to see a substantial bifurcation in the cryptocurrency asset class as the SEC, Congress, and other US government agencies and branches sink their regulatory claws into the asset class and its technology. There is no doubt blockchain technology has ubiquitous utility and acceptance. The tokens, not so much.

I view the Wells notice as the first regulatory move in a chess game that will develop over the coming months and years. With each correction in the cryptocurrency market, the government is likely hoping it will disappear.

Each time it comes back stronger and rises to new highs, we will likely see increased regulatory and governmental scrutiny. While an overall market cap at just over the $2 trillion level does not pose systemic risks to the financial system, a $10 trillion market cap is another story.

Expect more missiles, which will cause heightened volatility. The market acceptance of crypto continues to grow, but governments are ideologically on the other side of the argument.

Money is the root of power, as control of the purse strings is a critical control element. Do not expect governments to look the other way as the market cap swells.