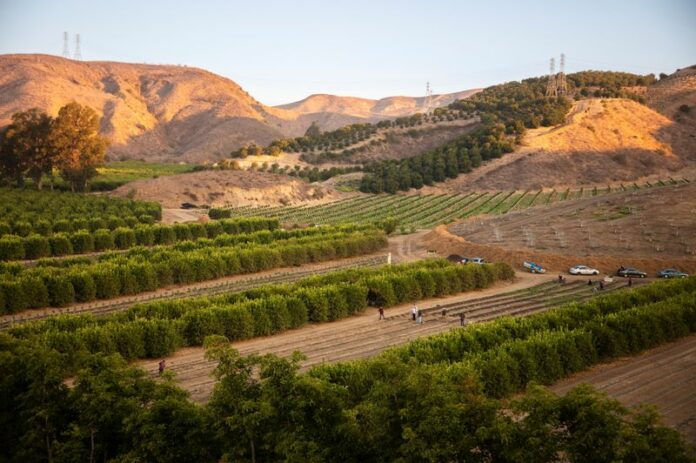 Wake up and smell the coffee … made in the United States 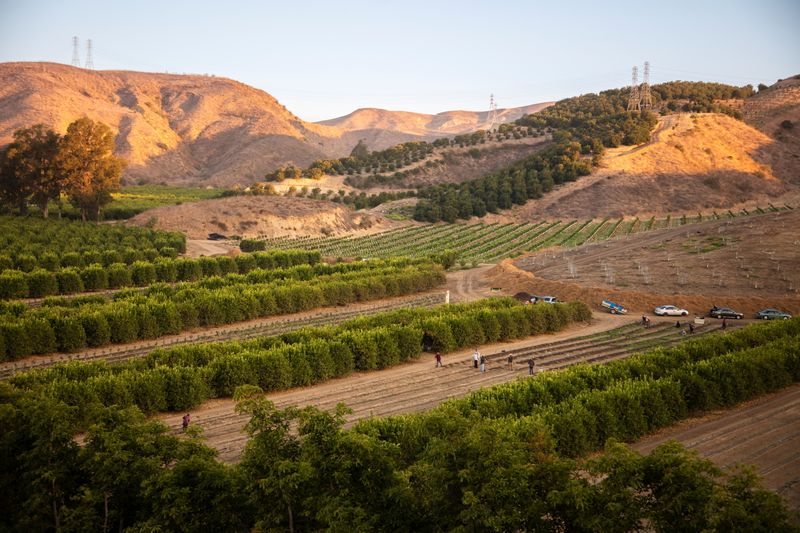 © Reuters. Coffee crops are seen in the Hobson Family Farms, a partner of company FRINJ Coffee which operates a coffee production enterprise in the U.S., in Ventura, California, U.S., in this picture obtained by Reuters on September 20, 2021. FRINJ Coffee/Handout vi

NEW YORK (Reuters) – Farmer David Armstrong recently finished planting what is likely the most challenging crop his family has ever cultivated since his ancestors started farming in 1865 – 20,000 coffee trees.

Except Armstrong is not in the tropics of Central America – he is in Ventura, California, just 60 miles (97 km) away from downtown Los Angeles.

“I guess now I can say I am a coffee farmer!” he said, after planting the last seedlings of high-quality varieties of arabica coffee long cultivated in sweltering equatorial climates.

Coffee is largely produced in the Coffee Belt, located between the Tropic of Cancer and the Tropic of Capricorn, where countries such as Brazil, Colombia, Ethiopia and Vietnam have provided the best climate for coffee trees, which need constant heat to survive.

Climate change is altering temperatures around the globe. That is harming crops in numerous locales, but opening up possibilities in other regions. That includes California and Florida, where farmers and researchers are looking at growing coffee.

Armstrong recently joined a group of farmers taking part in the largest-ever coffee growing endeavor in the United States. The nation is the world’s largest consumer of the beverage but produces just 0.01% of the global coffee crop – and that was all in Hawaii, one of only two U.S. states with a tropical climate, along with southern Florida.

Traditional producers of coffee such as Colombia, Brazil and Vietnam have suffered from the impact of extreme heat and changing rain patterns. Botanists and researchers are looking to plant hardier crop varieties for some of those nations’ coffee growing regions.

Top producer Brazil is going through the worst drought in over 90 years https://www.reuters.com/business/environment/brazil-drought-alert-country-faces-worst-dry-spell-91-years-2021-05-28. That was compounded by a series of unexpected frosts, which damaged about 10% of the trees, hurting coffee production this year and next.

“We are getting to 100,000 trees,” said Jay Ruskey, founder and chief executive of Frinj Coffee, a company that offers farmers interested in coffee growing a partnership package including seedlings, post-harvest processing and marketing.

Ruskey says he started trial planting of coffee in California many years ago but told few about it. He said he only “came out of the closet as a coffee farmer” in 2014, when Coffee Review, a publication that evaluates the best coffees every crop year, reviewed his coffee, giving his batch of caturra arabica coffee a score of 91 points out of 100.

Frinj is still a small coffee company targeting high-end specialty buyers. Frinj sells bags of 5 ounces (140 grams) for $80 each on its website. As a comparison, 8-ounce packages of Starbucks (NASDAQ:SBUX) Reserve, the top-quality coffee sold by the U.S. chain, sell for $35 each. Frinj produced 2,000 pounds (907 kg) of dry coffee this year from eight farms.

“We are still young, still growing in terms of farms, post-harvest capabilities,” said Ruskey. “We are trying to keep the price high, and we are selling everything we produce.” The venture is already profitable,” he said.

The company has been growing slowly since, with Armstrong’s 7,000-acre (2,833-hectare) Smith Hobson Ranch one of the latest, and largest, to partner with Ruskey.

“I have no experience in coffee,” said Armstrong, who typically grows citrus fruits and avocados, among other crops.

To boost his chances of success, he installed a new irrigation system to increase water use efficiency and has planted the trees away from parts of the ranch that have been hit by frosts in the past.

Coffee uses 20% less water than most fruit and nut trees, according to the United Nations Food and Agriculture Organization. Water has become scarce in California after recent droughts and forest fires. Many farmers are switching crops to deal with limits on water use.

Giacomo Celi, sustainability director at Mercon Coffee Group, one of the world’s largest traders of green coffee, said the risks of cultivating coffee in new areas are high.

“It seems more logical to invest in new coffee varieties that could be grown in the same current geographies,” he said.

As the climate warms in the southern United States, researchers at the University of Florida (UF) are working with a pilot plantation to see if trees will survive in that state.

Scientists have just moved seedlings of arabica coffee trees grown in a greenhouse to the open, where they will be exposed to the elements, creating the risk that plants could be killed by the cold when the winter comes.

“It is going to be the first time they will be tested,” said Diane Rowland, a lead researcher on the project.

Rowland said researchers are planting coffee trees close to citrus, an intercropping technique used in other parts of the world as larger trees help hold winds and provide shade to coffee trees.

The project, however, is about more than just coffee cultivation. Alina Zare, an artificial intelligence researcher at UF’s College of Engineering, said scientists are also trying to improve how to study plants’ root systems. That, in turn, could help in the selection of optimal coffee varieties for the region in the future.

According to the National Oceanic and Atmospheric Administration, the U.S. weather agency, annual mean temperatures were at least 2 degrees Fahrenheit (1.1 degrees Celsius) above average for more than half the time in the long-term measuring stations across the United States’ southeastern region in 2020.

“With climate change, we know many areas in the world will have difficulties growing coffee because it is going to be too hot, so Florida could be an option,” Rowland said.