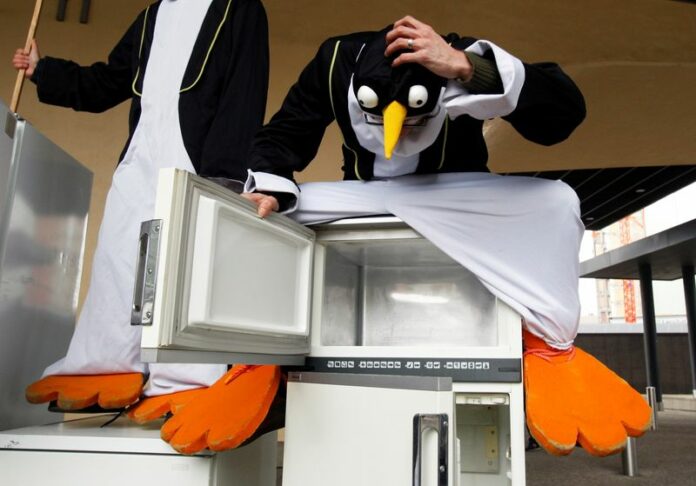 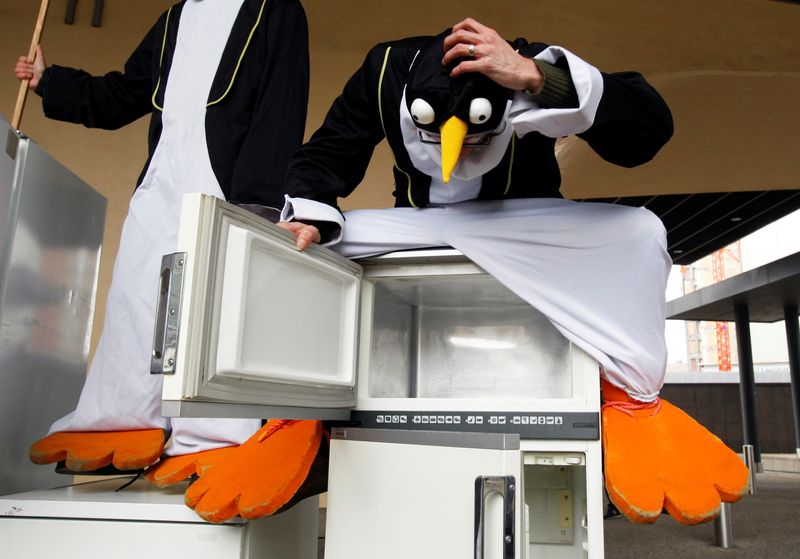 © Reuters. FILE PHOTO: Climate activists dressed as penguins sit on refrigerators during a protest outside the European Commission headquarters in Brussels, March 12, 2009. Environmental organisations are urging Europe not to weaken the EU’s energy efficiency goals

WASHINGTON (Reuters) – The U.S. Environmental Protection Agency on Thursday finalized a rule that will slash the use of a potent climate-warming gas commonly used in refrigerators and air conditioners by 85% over the next 15 years, a move that will help halve greenhouse gas emissions this decade.

The rule aims to phase out the use of hydrofluorocarbons (HFCs) by 85% in a range of common appliances and carries out legislation passed with bipartisan support in Congress last year. It would make the U.S. compliant with the Kigali amendment to the Montreal Protocol, a global treaty to reduce HFCs that the U.S. has not yet ratified.

“It really sends a signal to the rest of the world that we are all in on climate change,” National Climate Advisor Gina McCarthy told reporters on Tuesday evening.

The rule comes with under six weeks to go before the pivotal UN climate summit in Glasgow. President Joe Biden is rolling out several climate measures through executive actions, while other key climate proposals are dependent on Congress passing budget and infrastructure bills.

McCarthy said she does not know when Biden will send the amendment to the Senate for ratification.

The EPA said the rule is one of the most “consequential” in terms of its climate impact. Along with additional interagency measures, it can reduce 4.5 billion metric tons of carbon dioxide-equivalent by 2050 — equal to nearly three years of U.S. power sector emissions at 2019 levels, according to a White House fact sheet.

The EPA rule creates an allowance allocation and trading system to reduce HFCs and is reviewing over a dozen petitions to restrict HFC use in other applications.

The EPA and White House also announced on Thursday that the administration will take an interagency approach to prevent the illegal trade, production, use, and sale of HFCs and prepare for enforcement actions to punish violations of the law.

Palm rise to near record highs on improving Oct exports

Palm rise to near record highs on improving Oct exports

President Vladimir Putin on Cryptocurrency: ‘I Believe That It Has Value’