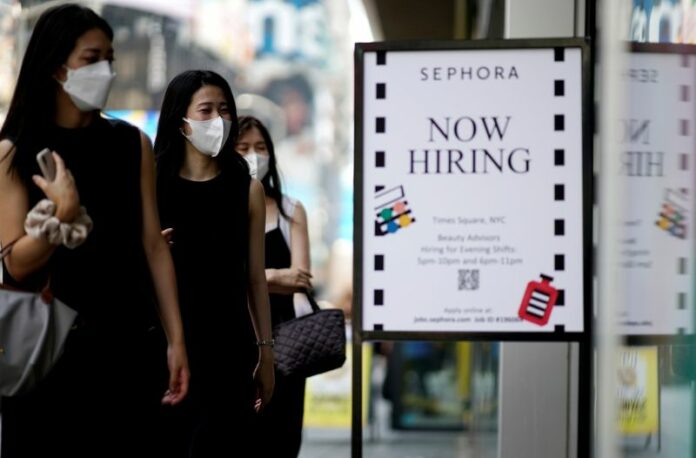 WASHINGTON (Reuters) – U.S. Federal Reserve Chair Jerome Powell has tied the initial wind down of the central bank’s bondbuying program to “decent” job growth in September, but high frequency payroll data so far show the pandemic may still be holding back hiring.

Among them, a report this week from payroll management firm UKG showed shift work across a variety of industries, measured during the week when a federal jobs survey is conducted, “was effectively flat month over month” from August to September, said UKG vice president Dave Gilbertson.

“We will likely see one more month go by without the job creation acceleration that economists have been predicting,” said Gilbertson, noting that job openings remain strong but “people remain unwilling to jump back into the market, whether that be due to family and childcare obligations, salary and benefit requirements, changing job paths, or the surging Delta variant.”

Powell said Wednesday the Fed intends to begin reducing its $120 billion in monthly bond purchases as soon as November, and, absent a significant change in the direction of the U.S. recovery, certainly by the end of the year.

Yet he did set a condition around the government report, to be released on Oct. 8, that will detail September job creation.

It will be the last official jobs report the Fed will receive before its November meeting, and while Powell said it needn’t be “a knock-out, great, super-strong” report, it would need to be “reasonably good.”

In normal times that would mean one thing. Over the decade from 2010 to the start of the pandemic monthly job growth averaged 186,000.

For the pandemic era, with millions of jobs still missing, that probably sets the bar at several hundred thousand.

Average monthly job creation has averaged 487,000 since the Fed said in December it would need to see “substantial further progress” in the labor market before starting to reduce its bond purchases. It would take around 365,000 new jobs in September for the United States to have regained half the payroll positions “missing” at the point the Fed adopted that language, a benchmark some officials have mentioned as their marker for “substantial” progress.

The Fed may be disappointed.

Payroll data from Homebase https://joinhomebase.com/data shows a steady decline in employment at a sample of around 50,000 small businesses, many of them restaurants and other service sector firms most likely to feel the impact if consumers shy away from in-person activities again given the new surge of coronavirus cases.

An Oxford Economics recovery tracker fell for the week of Sept. 10, led by 2 a percentage point drop in its measures of employment.

The Fed acknowledged a fresh pandemic hit to the most beleaguered parts of the economy in the policy statement released Wednesday, and Powell amplified the message in his press conference.

“We have…a unique situation where by many measures the labor market is tight,” with record job openings, rising wages and other conditions that would let the Fed start to turn away from pandemic support and begin reducing its monthly bond purchases, Powell said. Policymakers, moreover, anticipated a surge of new jobs in the fall as schools reopened, unemployment benefits expired, and other changes “would come together…so we’d get out of this strange world where there are lots of unemployed people and a high unemployment rate but a labor shortage.”

Instead “Delta happened,” Powell said, referring to the more virulent strain of the coronavirus, and employers added a disappointing 235,000 jobs in August.

There have been other dud job reports in recent months.

But September has now taken on added significance as the Fed looks ahead to its November policy meeting and a possible start to the bond taper.

“If the economy continues to progress broadly in line with expectations, then I think…we could easily move ahead at the next meeting,” Powell said, “or not.”