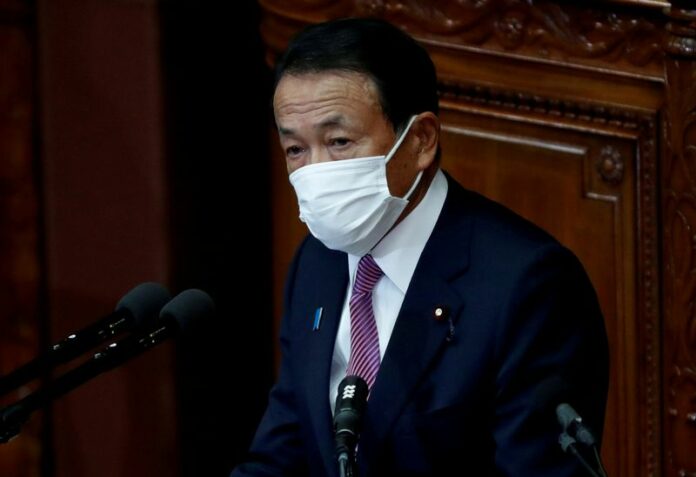 TOKYO (Reuters) – Japanese Finance Minister Taro Aso called on Tuesday for a combination of monetary and fiscal policies to help boost inflation towards the Bank of Japan’s 2% inflation target, saying easy money policy has its limit.

“We must utilise both monetary and fiscal policies” to bring inflation to a certain level, Aso told reporters after a cabinet meeting.

Aso made the remark when asked to evaluate efforts by BOJ Governor Haruhiko Kuroda, who became on Tuesday the longest serving Japanese central bank governor.

It was rare for the finance minister to speak at length about monetary policy, which he usually leaves to the BOJ.

“It’s true the BOJ has not yet achieved its 2% inflation target,” Aso said. “We cannot expect inflation to rise without stronger consumer demand. Monetary policy alone has its limit.”

Around 8 1/2 years in office, Kuroda’s aggressive monetary stimulus has failed to spark inflation to the elusive 2% target.

A prolonged easing has raised concern about side effects such as hits to banks’ profits, while many analysts call the target a tall order.

Japan’s core consumer inflation stood flat and barely stopped falling in August for the first time in 13 months, bolstering the view that inflation won’t reach the target at least until Kuroda’s term ends in 2023.

The BOJ stuck to its short-term interest rate target at -0.1% and that for 10-year bond yields around 0% at its two-day rate review that ended on Wednesday last week.

What Powell’s Hawkish Transition Could Mean for Asian Markets