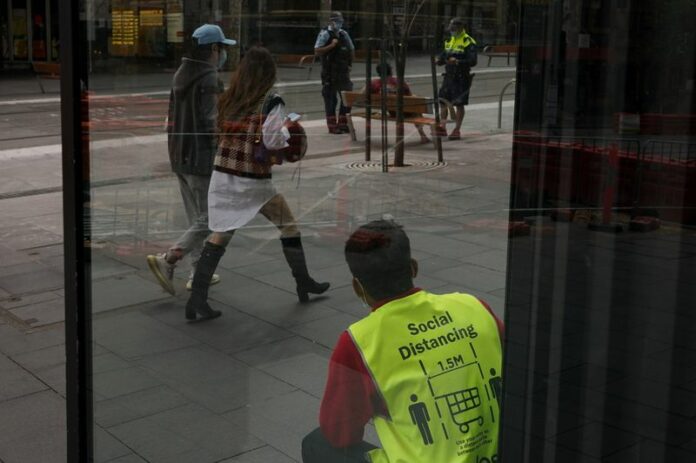 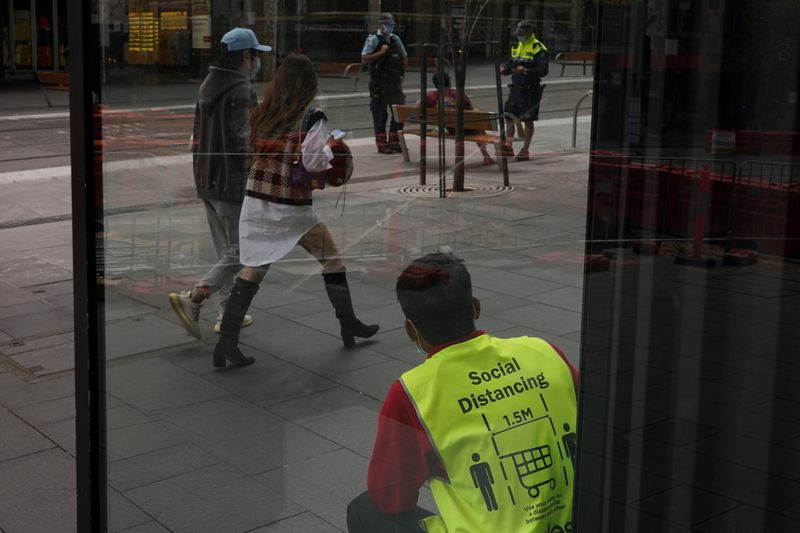 © Reuters. FILE PHOTO: A grocery store employee wearing a vest with social distancing guidelines printed on the back looks on, as police officers check a man in the city centre during a lockdown to curb the spread of a coronavirus disease (COVID-19) outbreak in Sydn

SYDNEY (Reuters) -Australia’s federal government will wind down emergency funding for people who lost work during COVID-19 shutdowns as vaccination rates increase across the country, putting pressure on state and territory leaders to keep their economies open.

The decision to cut off federal support when inoculation levels reach 80% means individual states and territories would have to foot the bill if they decide to go into lockdown in response to any fresh outbreaks of the coronavirus.

“(This) emergency payment needs to come to an end,” Frydenberg told Seven News on Wednesday. “If you look around the world … people are starting to get about their normal lives, learning to live with the virus in a COVID-safe way.”

Australia’s two biggest cities, Sydney and Melbourne, along with its capital Canberra, have been in lockdown for several weeks as the country grapples with a Delta variant-fuelled third wave of the virus.

The shutdowns have put Australia’s A$2 trillion ($1.5 trillion) economy on the brink of a second recession in as many years.

Latest data showed Australian employment dived in August as lockdowns in Sydney and Melbourne forced businesses to lay off workers and slash hours, while the jobless rate was nudged lower by a sharp fall in the number of people looking for work.

In other virus-free parts of the country, state and territory leaders, who have the power to close their borders under Australia’s federal system of government, have done just that, hoping to avoid importing infections from the hotspots.

The federal government, which has spent more than A$9 billion ($6.5 billion) since June to support around 2 million people, wants all internal borders reopened when the 80% vaccination threshold is reached nationally, expected in November.

However, despite the creation of a national cabinet to form a cohesive response to the pandemic, some state leaders have indicated they may not follow that national plan.

Western Australian state Premier Mark McGowan has refused to rule out further lockdowns even when the vast majority of people have been vaccinated.

Frydenberg said federal income support payments will begin to be phased out when a state reaches 70% vaccination. At that level, affected workers must reapply each week to confirm their eligibility. Payments will stop two weeks after the 80% target is met.

That means that New South Wales, the most populous state and one of the epicentres of the current outbreak, would lose payments within weeks. Around 62% of people in the state have been vaccinated, above a national average of 53%.

Queensland and Western Australia, which are currently not receiving any federal income support, have the lowest vaccination rates in the country, with both states not expected to reach 80% until mid-December.

Victoria state, meanwhile, reported a record number of new infections for a second consecutive day, with 950 cases and seven deaths.