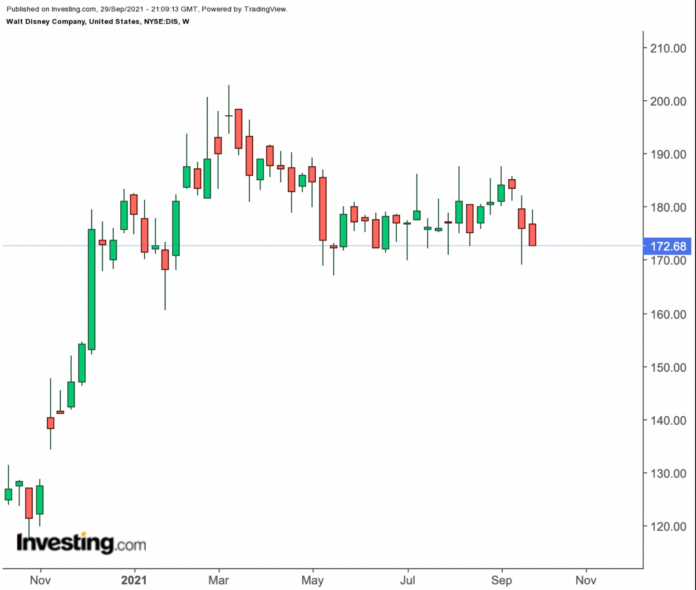 After a miserable 2020, there appears to be yet more pain ahead for Disney (NYSE:DIS) investors. The stock extended its slide when the entertainment giant last week indicated that it won’t be able to meet analysts’ growth forecasts for the current quarter.

Chief Executive Officer Bob Chapek told an audience during a recent conference that the company will have fewer new Disney+ users than analysts have been expecting for the fiscal 2021 fourth quarter ending Oct. 3.

“The quarter-to-quarter business is not linear,” Chapek said, speaking at a Goldman Sachs virtual conference, adding:

“We’re very bullish and confident about our long-term subscriber growth, but we’re going to see a little bit more noise than I think maybe the Street expects.”

During the past six months, Disney shares have fallen more than 6%, underperforming when compared with the company’s closest rival, Netflix (NASDAQ:NFLX) whose stock has gained 19% during this period. There are many reasons Disney’s bearish spell has continued. And in our view, it still has more room to run.

The biggest factor: the uneven performance of the company’s flagship streaming video service. After establishing a leading position in the very competitive streaming market since its launch in November 2019, that patch of weakness was very much expected.

Helped by the stay-at-home environment during the pandemic, Disney+ subscribers reached 116 million in the most recent quarter, emerging as the fastest growing business segment within the company’s entertainment empire. The division’s growth helped offset the major losses that Disney absorbed as a result of its movie theaters and theme parks being hit by closures during the COVID-19 lockdowns.

As the global economy reopens, and people indulge in other entertainment options, growth in subscribers is unlikely to be linear. That said, Disney+ will continue to be the best bet after Netflix in the streaming world, given its powerful brand, its massive lead in producing superior content, and its global expansion potential.

To keep subscribers hooked as well as bring in new ones, Disney has dozens of movies and television shows in production for the service. Over the next year, the company will continue to expand to new markets overseas that don’t yet have access to Disney+.

In a recent note to clients, Wells Fargo said investor concerns about subscriber guidance is overdone, and the company can still achieve its 260-million subscriber target by 2024.

Combine this growth with Disney’s traditional revenue generators, such as its theme parks, consumer products, film studios, and television networks, and there’s still a great company that could generate a lot of cash once the pandemic is over and normal life resumes.

There are already signs that there is a huge pent-up demand for Disney’s entertainment avenues. Tourists returning to theme parks bolstered Disney’s balance sheet in the previous quarter, as key resorts stayed open throughout that period.

The company’s theme parks and consumer products division posted its first profitable quarter in more than a year. Revenue at the division—which includes its Walt Disney World and Disneyland resorts—increased 300% from the same period last year, and the segment swung to a profit of $356 million for the quarter.

The bearish spell for Disney stock could extend into the fourth quarter as explosive growth in its streaming service returns to a more normal level, creating doubts in some investors’ minds about the future. But this weakness is a buying opportunity for patient investors, given the company’s unparalleled assets and its growth potential in the post-pandemic world.