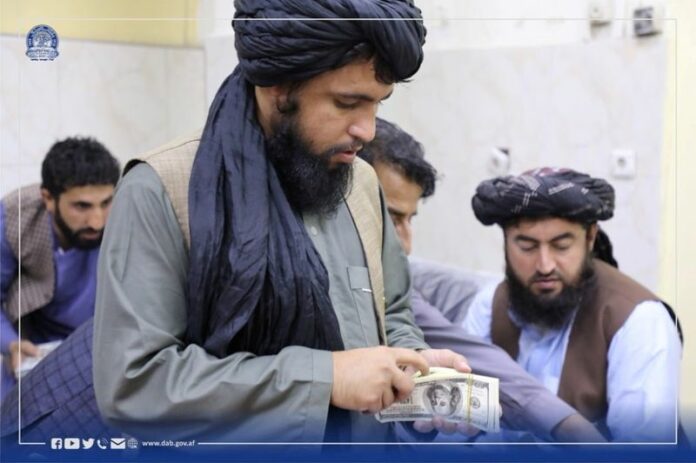 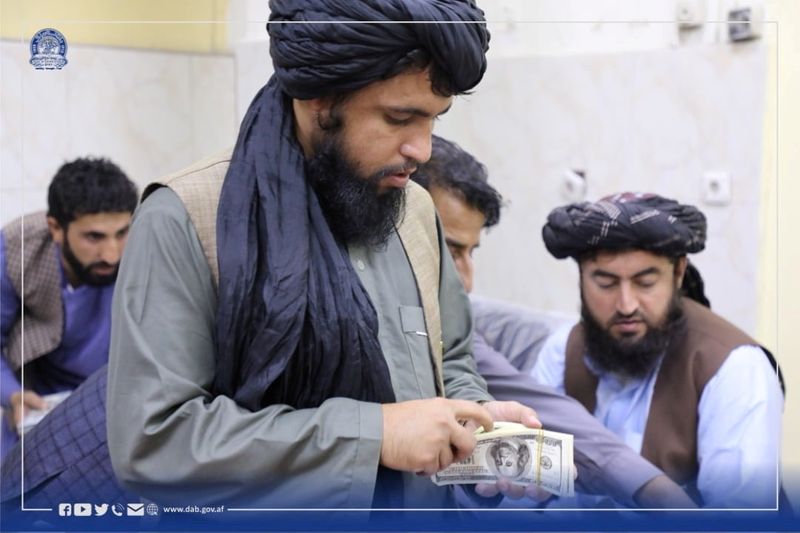 © Reuters. FILE PHOTO: Men are pictured as Afghanistan’s Taliban-controlled central bank seizes a large amount of money in cash and gold from former top government officials, including former vice president Amrullah Saleh, in Afghanistan, in this handout obtained by

By John O’Donnell and Rupam Jain

FRANKFURT/MUMBAI (Reuters) – The Afghan central bank ran down most of its U.S. dollar cash reserves in the weeks before the Taliban took control of the country, according to an assessment prepared for Afghanistan’s international donors, exacerbating the current economic crisis.

It was written for the use of donors and lenders, including the World Bank and International Monetary Fund.

It criticised how the central bank’s former leadership handled the crisis in the months before the Taliban’s conquest, including decisions to auction unusually large amounts of U.S. dollars and move money from Kabul to provincial branches.

“The biggest source of the problem is the mismanagement at the central bank prior to the Taliban takeover,” it added.

Shah Mehrabi, chairman of the central bank’s audit committee who helped oversee the bank before the Taliban took over and is still in his post, defended the central bank’s actions, saying it was trying to prevent a run on the local Afghani currency.

The extent of the cash shortage can be seen on the streets of Afghan cities, where people have been queuing for hours to withdraw dollar savings amid strict limits on how much they can take out.

Even before the shock of the Western-backed government’s collapse, the economy was struggling, but the return of the Taliban and abrupt end of billions of dollars in foreign aid has left it in deep crisis.

Prices for staples like flour have spiralled while work has dried up, leaving millions facing hunger as winter approaches.

Under the previous government, the central bank relied on cash shipments of $249 million, delivered roughly every three months in boxes of bound $100 notes and stored in the vaults of the central bank and presidential palace, according to three people with direct knowledge of the matter.

That money has dried up as foreign powers shy away from dealing directly with the Taliban, which fought against foreign troops and the ousted government. Thousands of people – many of them civilians – died.

The central bank, which plays a key role in Afghanistan because it distributes aid from countries like the United States, said on Wednesday it had finalised a plan to meet the country’s foreign currency needs. It gave no details.

The hard currency crunch is making it difficult for the Taliban to meet basic needs, including paying for power or dispersing salaries to government employees, many of whom have not been paid in months.

Afghanistan’s roughly $9 billion of offshore reserves were frozen as soon as the Taliban captured Kabul, leaving the central bank with just the cash in its vaults.

According to the report, the central bank auctioned off $1.5 billion between June 1 and Aug. 15 to local foreign exchange dealers, which it said was “strikingly high”.

“By August 15, the Central Bank had an outstanding liability of $700 million and 50 billion Afghanis ($569 million) towards the commercial banks,” it said, adding that this had been a major factor in emptying its coffers.

Afghan central bank official Mehrabi said, however, that although almost $1.5 billion of auctions had been announced, the actual amount sold was $714 million.

He said the central bank had “continued its foreign exchange auction to reduce the depreciation and inflation.”

The report also questioned a decision by the central bank to shift some of its reserves to provincial branches, putting it at risk as Taliban militants made advances across the country from late 2020 in the runup to their victory.

It said around $202 million was kept in these branches at the end of 2020, compared with $12.9 million in 2019, and that the cash was not moved as provinces started to fall to the insurgents.

“Some money is reportedly lost (stolen) from ‘some’ of the provincial branches,” the report said, without specifying how much.

Mehrabi said the central bank was investigating money “stolen” from three of its branches, although not by the Taliban. He gave no further details.

Former central bank governor Ajmal Ahmady, who left the country the day after Kabul fell, did not respond to emails and other messages requesting comment on his and the bank’s actions in the months before the Taliban returned to power.

Ahmady has said on Twitter (NYSE:TWTR) in recent weeks that he did his best to manage the situation, and blamed any cash shortfall on the freezing of central bank assets abroad.

In his statements, he also said the central bank had managed the economy well prior to the fall of Kabul and that he felt bad about leaving staff behind but feared for his safety. He has said no money was stolen from any reserve account.

Two in hospital after police fire on Dutch COVID-19 protesters

Two in hospital after police fire on Dutch COVID-19 protesters

Our Renewable Future Will Run On Copper

India Rubber: Prices up in Kerala; TOCOM down on profit booking

Copper rebounds from lowest in a month