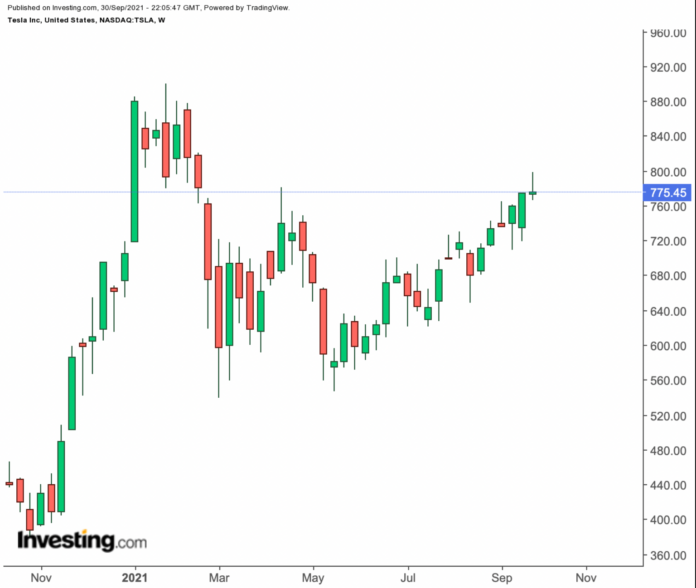 Electric vehicle-maker Tesla (NASDAQ:TSLA) is seeing its stock rally again. Tesla shares have gained more than 40% from their lowest point this year, making a slow comeback after slipping from a record high in January.

The surge since May 19 coincides with a rally in other high-growth tech stocks, but the move in Tesla is much more powerful. The biggest question facing Tesla bulls now is: Is this rally sustainable? It’s certainly hard to predict the next move in Tesla stock, which often thrives on a cult-type following and has been a darling of speculative investors. But this time, Tesla bulls are basing their optimism on a blockbuster quarter that they believe the California-based company will report this month.

According to Piper Sandler, which has a $1,200 price target on Tesla, strong production and margins should drive a historic third quarter for the electric vehicle-maker.

“We think Q3 will be TSLA’s strongest quarter ever, and we are increasing our 2021 estimates accordingly.”

“The most obvious beneficiary from a brighter US EV outlook is Tesla, which is the company in our coverage which is best positioned as a winner in an EV world. Simply, with greater consumer acceptance/feasibility of EV, it expands the pool of potential Tesla buyers.”

These bullish predictions about Tesla may prove correct, but in our view, there are still some hurdles in the way for the stock to continue with its current rally. First, the macro environment is becoming more uncertain for growth stocks.

Since the Federal Reserve signalled last week a move to taper pandemic stimulus, Treasury yields have jumped and sent a shockwave through growth shares. Many analysts believe that surging inflation and supply shortages are dragging the world economy into stagflation, which could hit overvalued stocks like Tesla.

The company is already struggling to bring its latest models to the market due to pronounced chip shortages. During its last earnings call, Tesla told investors the company’s future pace of growth won’t be able to escape the ongoing supply-chain challenges.

Tesla again delayed its semi-trailer truck—already two years late. The vehicle’s first deliveries are now slated for 2022. The company attributed the delay to supply-chain issues and limited battery-cell supply, as well as its focus on getting new factories online. The company’s plans for its first pickup truck, once expected to go to customers as early as this year, are also being affected by parts issues, said Chief Executive Elon Musk on an earnings call. No revised delivery date was given.

Tesla’s valuation is another matter of concern and a major source of friction among Wall Street’s top analysts. Some argue that Tesla is a highly overpriced stock and the company has no room to make an error when its stock is priced for perfection.

Tesla stock’s slow and gradual move since May shows investors’ strong belief that the company will continue to improve margins, helped by the surging demand for its EVs. That optimism, however, ignores the current threats to growth stocks and lingering effects of supply shortages that car manufacturers are facing.