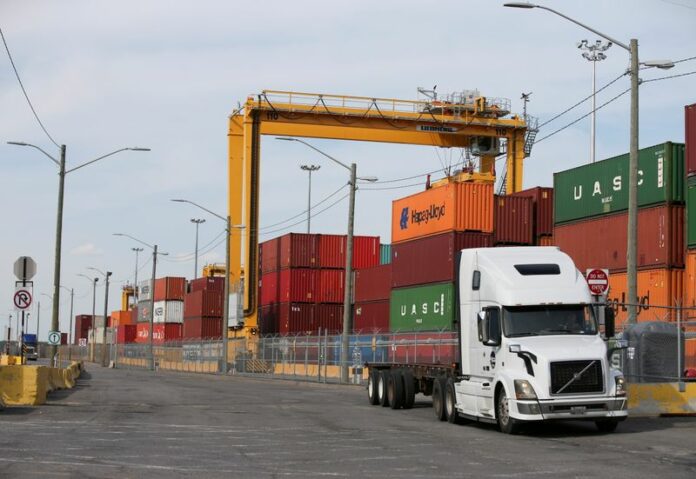 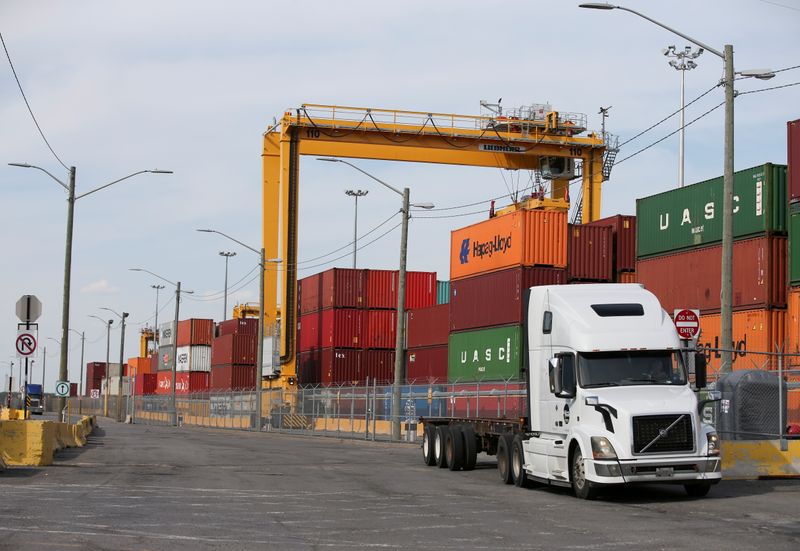 © Reuters. FILE PHOTO: A truck moves past stacked shipping containers at the Port of Montreal in Montreal, Quebec, Canada, May 17, 2021. REUTERS/Christinne Muschi

OTTAWA (Reuters) -Canada’s economy likely rebounded in August from a slight contraction in July, buoyed by growth in the hospitality industry, though a withering drought will continue to drag on the important agriculture sector, data showed on Friday.

The Canadian economy contracted 0.1% in July, just beating analyst estimates of a decline of 0.2%, but likely grew by 0.7% in August on jumps in services and manufacturing, Statistics Canada said. The August number is a preliminary estimate.

With the expected rise in August, total economic activity is about 1% below pre-pandemic levels, Statscan said.

“The slightly smaller-than-expected setback in July and nice pop in August suggest that the economy managed to grind out some moderate growth in the summer quarter as a whole,” Doug Porter, chief economist at BMO Capital Markets, said in a note.

The July decline came as a heat wave hit the agriculture sector and manufacturers were dragged down by supply chain woes, while construction declined for the third month in a row.

This was partially offset by strong momentum in services, as the easing of public-health measures continued to drive a rebound in hospitality and tourism, Statscan said.

That strength in services is expected to extend into August and beyond, even as a harsh fourth wave of COVID-19 infections weighs on the prairie provinces of Alberta and Saskatchewan.

Analysts said the Bank of Canada will likely go ahead with another tapering in its Oct. 27 rate decision, though the August gain is likely not enough to move the dial for the central bank on interest rates – especially after a disappointing second-quarter contraction https://www.reuters.com/business/canadian-economy-shrank-11-q2-july-gdp-seen-down-04-2021-08-31.

“We think the likelihood of (the Bank of Canada) soon following other global central banks in taking a hawkish turn is low,” Stephen Brown, senior Canada economist at Capital Economics, said in a note.