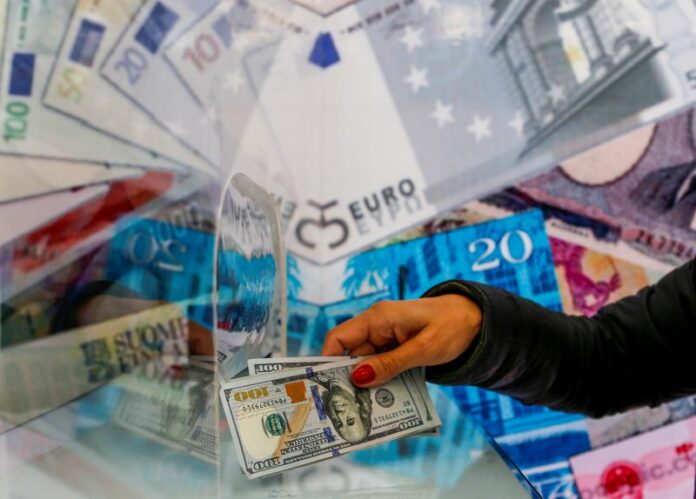 Column: Dollar surge both symptom and catalyst of world slowdown 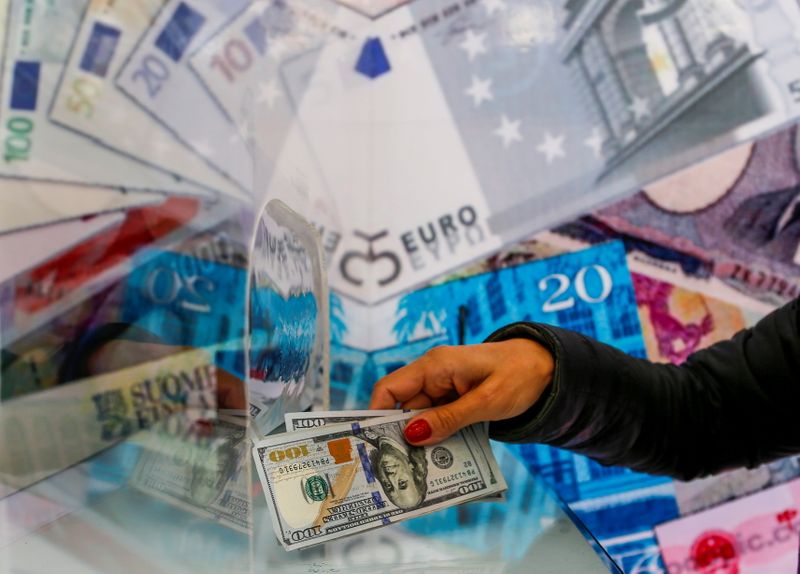 LONDON (Reuters) – A surging U.S. dollar signals for some the clearest sign of an ebbing money tide and an abrupt slowdown of the world economy over the remainder of 2021 at least.

Global economic data surprises all turned negative in August and continue to miss forecasts at a rate not seen since 2020, prompting some banks to cut growth forecasts.

Although these have been modest so far, HSBC on Thursday downgraded global GDP forecasts for this year and next, seeing growth almost halving to as low as 3.0% by 2023.

Aggregate bond borrowing rates have backed up from historic lows, reclaiming about half the drop from pre-shock levels. And world stocks have recorded their first negative quarter since the first three months of 2020, when COVID first hit.

The dollar, however, is gaining across the board, up almost 5% against major world currencies since June and hitting its highest 2021 levels against the euro, yen and sterling.

Such dollar surges are often both a reflector and amplifier of financial stress and have a habit of snowballing.

Consensus polling from the start of the year or even a month ago says this was not meant to be, with median forecasts for a steady weakening persisting until August.

And yet analysts convinced that global credit growth and liquidity are the dominant drivers of all asset prices – notably Citi’s Matt King and Michael Howell’s CrossBorder Capital – have been raising the alarm since early summer.

If true, ‘real’, inflation-adjusted, yields are now twitching back into life as markets map not just an horizon for a reduction of bond buying but for interest rate hikes too.

CrossBorder Capital put the dollar jump in the mixer.

In a note entitled “Bad News is Closer Than You Think”, it said ebbing liquidity growth is already slowing the world and any further sharp squeeze due to nerves about monthly inflation prints could well sow instability and risk another recession.

“This episode has all the ring of a major policy error,” it said, adding that recent gains in the dollar and flattening of the U.S. Treasury’s 5-10 year yield curve in inflation-protected securities were a decent guide to monetary conditions and show how markets are pricing gradual tightening ahead. If central banks get any more aggressive, these market moves would get supercharged.

Another dimension is China’s slowdown, its policy orientation to ‘stability’ over ‘growth’, worrisome property sector and local government debts and its jarring of investor nerves amid serial regulatory crackdowns.

“The West now faces two tricky adjustments at once: the end of the QE and the end of the Chinese credit boom,” CrossBorder concluded. “Global Liquidity looks set to tumble.”

A combination of rising U.S. real rate premia and a preference for dollar cash in a stressed financial environment could well push it much higher into year-end as the Fed prepares to execute the first tapering of its bond buying spree.

That combination of rising real rates and a rising dollar is toxic for non-U.S. borrowers who have loaded up on dollar debts – huge chunks of which were incurred after the pandemic hit and many of which need to get refinanced over the coming two years.

That negative feedback loop causes its own stress.

Recent studies spotlight the surge in dollar borrowing last year by non-banks outside the United States after a brief initial credit crunch. Bank for International Settlements data showed the total of dollar credit to these entities had already topped $12 trillion by the middle of 2020 – more than 14% of world GDP, compared to less than 10% in 2007.

Perhaps ominously, the Institute for International Finance points out that about half a trillion dollars of the more than $4 trillion of emerging market bonds and loans coming due next year is denominated in dollars.

And if stress begets stress, policymakers may do well consider the dollar’s role in it once again. Their silence on nascent foreign exchange movements during separate meetings of G4 central bankers and G7 finance ministers this week showed it’s still low down their priority list.

A more turbulent fourth quarter may change that.

Inflation in Russia nears six-year peak ahead of cenbank meeting

Inflation in Russia nears six-year peak ahead of cenbank meeting