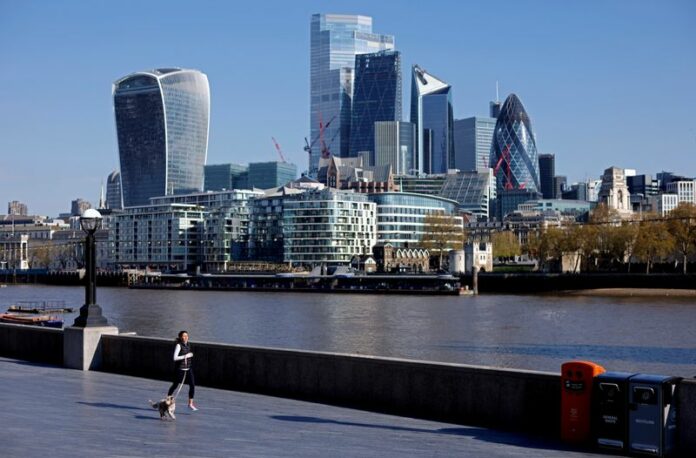 © Reuters. FILE PHOTO: A woman exercises with a dog near the City of London financial district, in London, Britain, April 30, 2021. REUTERS/John Sibley/File Photo

LONDON (Reuters) -Britain should consider dismantling the mandatory ring fencing of capital for retail banking introduced in the aftermath of the global financial crisis or risk harming post-Brexit competitiveness, a banking lobby group said on Friday.

The requirement for banks with deposits of 25 billion pounds ($34 billion) or more to cushion their retail divisions with extra capital was a core reform after the 2007-09 financial crisis, when taxpayers injected billions to steady lenders such as Royal Bank of Scotland (NYSE:RBS_old_old), now rebranded NatWest.

The ring fencing rules aim to shield depositors from any blow-ups in a bank’s separate trading operations.

Britain launched a review of the ring fencing rules in April, though Bank of England Deputy Governor Sam Woods has vowed to defend them to his last drop of blood.

UK Finance, which represents banks such HSBC, Lloyds (LON:LLOY) and Barclays (LON:BARC), said much had changed since the financial crisis, with banks holding far more capital and liquidity, rendering ring-fencing “surplus to requirement”.

The rules add to complexity and costs, which could undermine the sector’s competitiveness, UK Finance said in its response to the review, which is due to report back next year.

UK Finance submitted its response in June and it was made available to Reuters on Friday.

There should be a “root and branch” assessment of the purpose, design and operation of ring fencing, taking account of its original objectives, the benefits and adverse and unintended consequences, UK Finance said.

“We would ask the review panel to consider dismantling the regime should there be evidence to suggest that costs outweigh the benefits,” it said.

No other country has introduced such a “gold-plated” regime for banks, which demonstrated their resilience to market shocks last year when pandemic lockdowns unfolded, UK Finance said.

At the very least, significant amendments were needed, such as a higher threshold for triggering ring-fencing, it said.

“We recommend that the review panel explore the Swiss equivalent regime which has the overall economic and competitive aspects of the region as its primary basis supported by a strong capital, liquidity and regulatory framework,” UK Finance said.