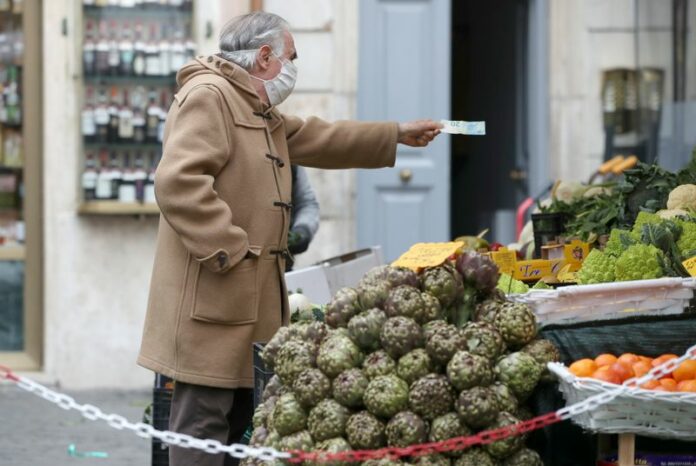 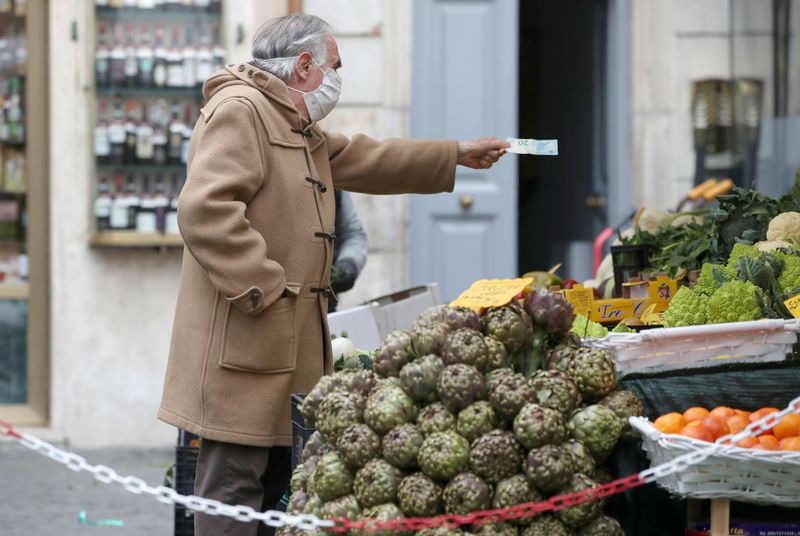 © Reuters. FILE PHOTO: A man shops groceries at an open-air market as the government is due to announce stricter coronavirus disease (COVID-19) restrictions, in Rome, Italy, March 12, 2021. REUTERS/Yara Nardi

Consumer price inflation in the 19 countries sharing the euro accelerated to 3.4% year on year in September from 3% a month earlier, the highest reading since September 2008 and just ahead of analyst expectations for 3.3%, data from Eurostat, the EU’s statics agency showed on Friday.

Prices rose predominantly on a surge in energy costs, mostly a reversal of the oil price crash that took place during the COVID-19 pandemic, but the impact from production and shipping bottlenecks was also showing as durable goods prices rose 2.3% from August.

With natural gas prices surging and bottlenecks impacting everything from car production to computer manufacturing, inflation could hit 4% by the end of the year, twice the ECB’s target, before what the bank anticipates will be a relatively quick decline in early 2022.

But supply-chain disruptions appear to be getting worse, raising the chances that the inflation hump seeps into underlying prices and creates more permanent pressures as firms adjust pricing and wage policy.

For now, the ECB is sticking with its narrative that this bout of inflation will quickly pass and price growth will then linger under its target for years to come, requiring depressed borrowing costs.

But ECB President Christine Lagarde struck a more cautious tone this week, pointing to increased inflation risks, even if she called for patience and warned against overreacting.

Market economists are meanwhile shifting their views, arguing that central banks may be underestimating the inflation risk.

“We think there are high chances that this inflation is less transitory than all central banks, including the ECB, are suggesting,” BNP Paribas (OTC:BNPQY) economist Luigi Speranza said.

“Consumers may start demanding higher wages and corporations may accommodate them, on the basis they could pass on higher cost via higher final prices.”

Underling prices, closely watched by policymakers as they filter out volatile food and energy prices, also accelerated in September.

Core inflation excluding food and energy rose to 1.9% from 1.6%, as did a narrower measure that also excludes alcohol and tobacco.

Although increasingly nervous about inflation, ECB policymakers are likely to err on the side of caution after the bank undershot its target for nearly a decade.

It has said it is willing to overshoot temporarily to ensure that inflation is really back to target, as fighting weak price growth has required unprecedented effort, including deeply negative interest rates and trillions of euros of asset purchases.