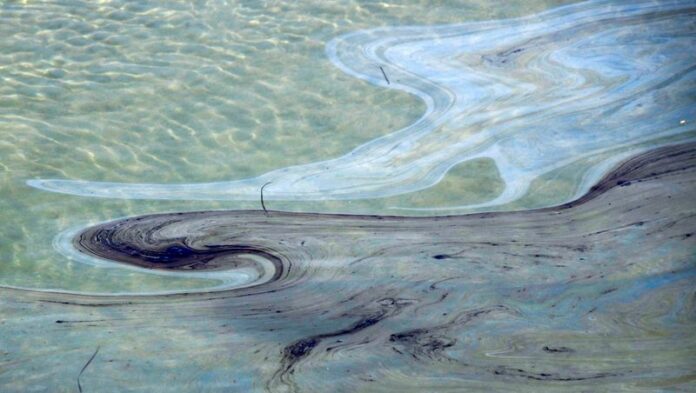 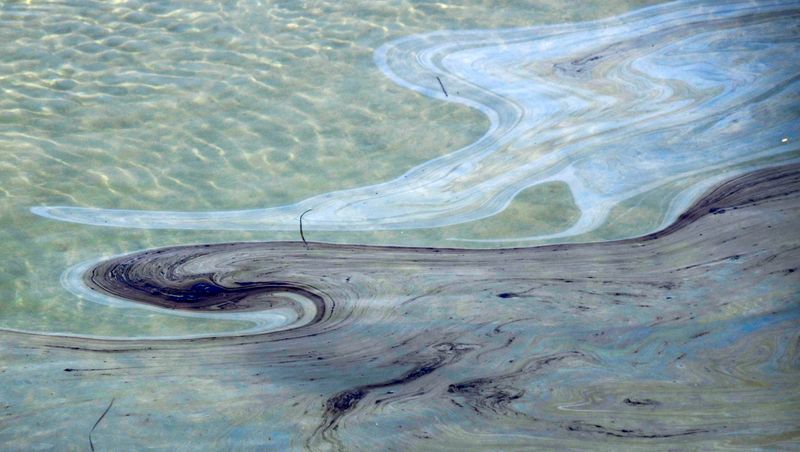 © Reuters. Oil slicks float on the water in the Talbert Channel after an oil spill off the coast of California has come ashore in Huntington beach, California, U.S. October 3, 2021. REUTERS/Gene Blevins

HUNTINGTON BEACH, Calif. (Reuters) -Federal and state investigators on Monday were focusing on a 41-year-old pipeline as the likely source of an oil spill that killed wildlife and fouled the coast of southern California, and an approaching storm threatened cleanup efforts.

The weekend spill sent 3,000 barrels of crude oil (126,000 gallons) into the Pacific Ocean. Authorities identified the line as the San Pedro Bay Pipeline that connects an offshore oil production platform to a site in Eureka, California.

Huntington Beach, about 40 miles (65 km) south of Los Angeles, was hit hardest with some 13 square miles (34 square km) of ocean and portions of its coastline “covered in oil,” said Mayor Kim Carr.

Cleanup crews dressed in white coveralls and helmets worked along a beach and wetlands running inland from the ocean on the eastern side of the coastal highway. Birds covered in oil washed up on shore, along with dead fish.

The inlet feeds the Magnolia Marsh, a wetlands that was rehabilitated after the Huntington Beach Wetlands Conservancy bought the land in 2008. Up to 90 bird species use the area each year, including eight to 10 that are either endangered or threatened, official have said.

Amplify on Monday did not return a call seeking information. On Sunday, Amplify executive Martyn Willsher said a pipeline carrying oil from the Elly offshore platform had been shut off and its remaining oil suctioned out.

Accuweather reported that a coming storm in the Los Angeles area could bring higher swells into the area beginning late in the day and continuing through Tuesday. This could hamper cleanup efforts.

Federal officials have stepped up scrutiny of aging and idled offshore energy pipelines. Energy companies have built 40,000 miles (64,000 km) of oil and gas pipelines in federal offshore waters since the 1940s.

Regulators have failed to address the risks from idled pipelines, platforms and other infrastructure on the sea floor, the watchdog U.S. Government Accountability Office (GAO) said this year.

“As pipelines age, they are more susceptible to damage from corrosion, mudslides and sea floor erosion,” GAO said.

Twenty-three oil and gas production facilities operate in federal waters off the coast of California, according to the U.S. Bureau of Ocean Energy Management. Beta Offshore has three platforms, including Elly.

Officials deployed 2,050 feet (625 meters) of protective booms, which help contain and slow the oil flows, and about 3,150 gallons had been recovered on Sunday, the U.S. Coast Guard said.