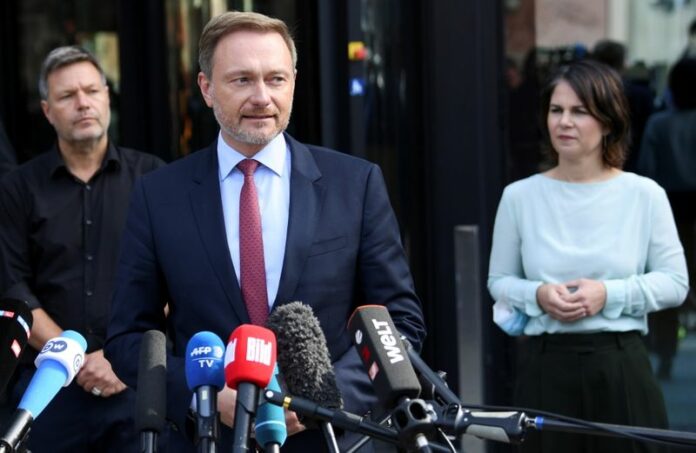 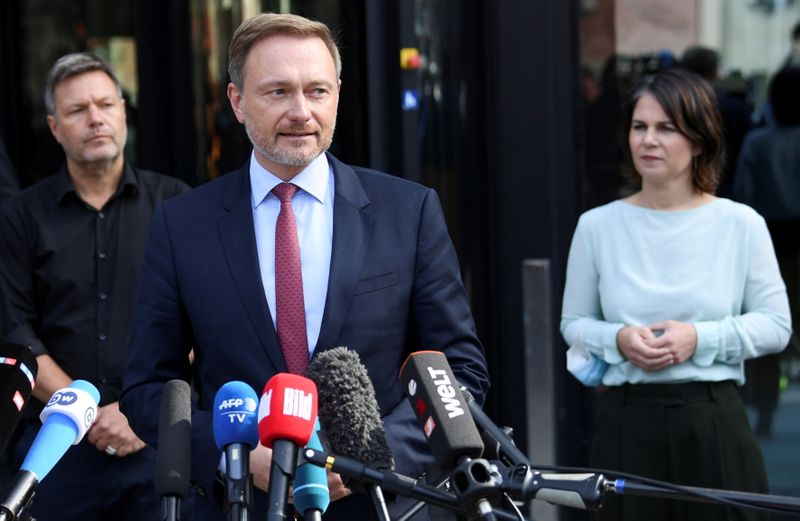 BERLIN (Reuters) -Whether the Social Democrats’ Olaf Scholz or a conservative becomes the next German chancellor, they will probably need to bring into their coalition two smaller parties that are far apart on many of the issues that will shape Germany’s future.

“Christian Lindner and I are about the same age, and both he and Robert Habeck are men,” joked Baerbock when asked about the seemingly scant areas of agreement between the two parties.

While Baerbock’s progressive environmentalists and Lindner’s libertarians are further from each other than either is from the Social Democrats or the conservatives, their youthful voter bases give them some things in common, especially on social and foreign policy.

NO DANCEMASTER – THIS IS FREESTYLE DISCO

In many countries, the president or monarch invites parties to enter talks on forming a government. In Germany, it’s up to the parties to find their own dance partners.

That can cause confusion, as now, when both the first-placed SPD and the second-placed conservatives say they have a mandate to drag the other two parties onto the dance floor.

But the two smaller parties, the Greens and the FDP, have seized the initiative and agree common ground before turning to any suitor.

If talks break down, President Frank-Walter Steinmeier can step in. In 2017, the Free Democrats quit talks with the conservatives and Greens after two months. Steinmeier all but ordered a reluctant SPD to step up.

A “grand coalition” of the conservatives with the SPD took office in March 2018. Scholz hopes to conclude coalition talks by Christmas. But if history repeats itself, all bets are off.

The Greens want to achieve net zero greenhouse gas emissions within 20 years through “a massive expansion offensive for renewables”. The FDP wants Germany to achieve climate neutrality by 2050. The SPD and conservatives can wait until 2045.

The Greens also seek to set a general speed limit on Germany’s ‘no limits’ motorways, an idea the FDP hates, and the two also disagree on whether combustion-powered cars should be banned in the medium term, and on taxing air travel more.

HOW TO BALANCE THE BOOKS?

The FDP seeks to cut taxes for everyone – a giveaway the IW institute estimates will cost 60 billion euros ($70.3 billion), which would be almost 20% of federal tax revenue. The Greens want to lower the threshold for those paying the top tax rate of 45% and to introduce a 48% band for ultra-high earners. They also want to reform the debt brake to promote public investment.

The conservative CDU/CSU bloc wants gradual tax cuts, while the Social Democrats (SPD) want to help those on small and medium incomes and increase taxes for the top 5%.

Along with the conservatives, the FDP rejects a “debt union” and wants to ensure that joint European Union borrowing to finance the EU’s coronavirus recovery package remains a one-off.

The Greens favour a common European fiscal policy to support investment in the environment, research, infrastructure and education.

The SPD regards the recovery package as the basis for building new trust in Europe and has talked about taking steps towards a fiscal union.

The Greens and the FDP are more wary of China than the SPD or the conservatives, agreeing that Chinese firms should have no part in the building of Germany’s next-generation telecoms networks to keep them secure.

The Greens say the Nord Stream 2 pipeline, which will take gas from Russia to Europe, will boost Germany’s reliance on Russia for energy and should not be allowed to come into operation. The FDP don’t go as far as this, but are more sceptical than the SPD.

In some areas the Greens are a lonely minority: alone among the four parties that could enter government, they oppose increasing German military spending to NATO’s target of 2% of economic output.

In other areas, the FDP is on its own. The three other parties would increase the minimum hourly wage to 12 euros ($14). The FDP says this is not a matter for the government.

Both the Greens and FDP are strongly in favour of investment to improve digital infrastructure. They share a young voter base exasperated by Germany’s fax- and phone-bound public administration.

The broad consensus could be useful when it comes to papering over their differences in fiscal policy.

The Greens and the FDP would legalise cannabis sales tomorrow, as would the SPD, and allow people to vote from 16.

All three parties would be prepared to allow dual citizenship – a huge change for thousands of ethnic Turks, many of whom remain foreign nationals after decades in Germany.

The Greens and the FDP would allow civil servants to wear religious headscarves at work. The SPD and conservatives would not.

Turkmenistan officials due in Afghanistan as Taliban back TAPI gas pipeline

Turkmenistan officials due in Afghanistan as Taliban back TAPI gas pipeline

Copper to extend slump in 2022 as mines ramp up, China weakens – Reuters poll