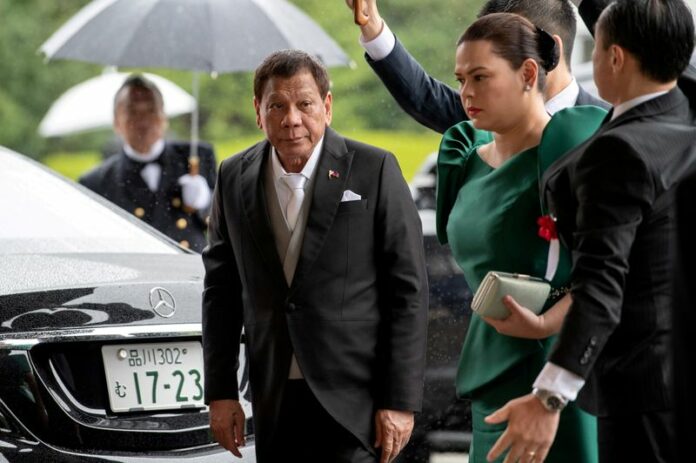 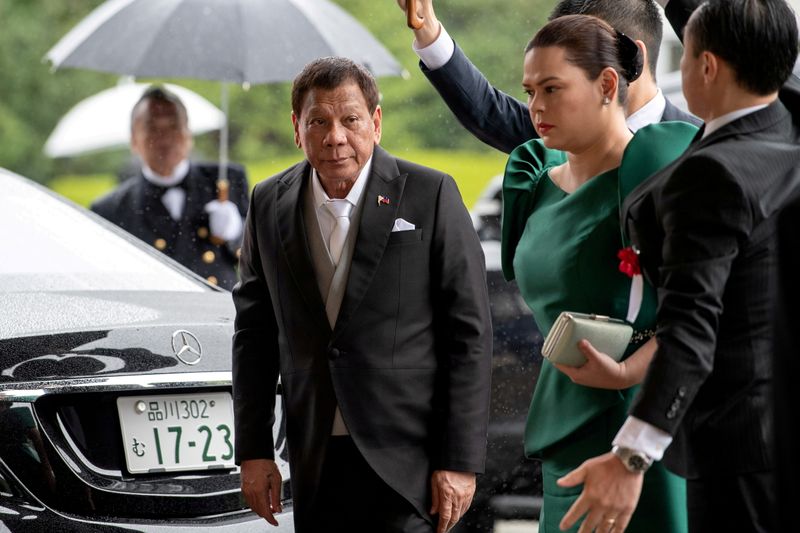 MANILA (Reuters) -Philippine President Rodrigo Duterte’s daughter will run for president in the 2022 election and her father’s long-time aide, who has filed his vice presidential candidacy, will be her running mate, ABS-CBN news reported late on Saturday.

Sara Duterte-Carpio is currently mayor of Davao, the Philippines’ third-largest city, and on Saturday filed her candidacy to run again for mayor. She has previously said she would not run for national office next year.

ABS-CBN news based its report on an interview that president Duterte had with a broadcast journalist right after he announced that he was retiring from politics on Saturday, while accompanying his closest loyalist Senator Christopher “Bong” Go to file his vice presidential candidacy.

“It is Sara-Go,” Duterte said in response.

When asked to confirm what the president said, Duterte-Carpio’s spokesperson Mayor Christina Garcia Frasco told Reuters: “The extent of my knowledge is also what was reported in local news. We have no comment on the same.”

Go did not immediately respond to a Reuters request for comment.

ABS-CBN news said it obtained permission from the broadcast journalist to use the video https://news.abs-cbn.com/news/10/02/21/duterte-sara-to-run-for-president-with-go-as-her-vp showing Duterte outside a hotel in Manila where the registration of candidates was taking place and that a transcript was also provided.

In the same clip, Duterte was asked when his daughter would file her candidacy for president, he said: “I really do not know. I do not have any idea at all”.

Duterte’s political party has yet to officially nominate its presidential candidate and Duterte-Carpio belongs to a different party.

Retired political science professor Temario Rivera said while Duterte’s daughter is winnable, the same could not be said about Go who has no political base, thus making a Duterte-Carpio-Go ticket “weak”.

“It would be an unsound political decision because what can Bong Go add to Sara’s candidacy?,” Rivera said.

While Duterte-Carpio is by far the most popular https://www.reuters.com/world/asia-pacific/support-dutertes-declines-philippines-election-survey-2021-09-29 presidential prospect, according to successive opinion polls this year, but Go, who was the president’s long-time aide before he became senator, trails in opinion surveys on preferred vice presidential bets.

Duterte, 76, said on Saturday he was retiring from politics https://www.reuters.com/world/asia-pacific/philippine-president-duterte-says-he-is-retiring-politics-2021-10-02, a surprise move that fuelled speculation he was clearing the way for a presidential run by his daughter.

He had been expected to run for the No. 2 job, a plan most Filipinos oppose https://www.sws.org.ph/swsmain/artcldisppage/?artcsyscode=ART-20210927101343 as violating the spirit of the constitution which sets a one-term limit for the president to stop power being abused.

Duterte-Carpio’s mayorial re-election filing, did little to douse speculation she has her eye on the presidency.

Analysts say it is crucial for Duterte to have a loyal successor to insulate him from potential legal action – at home or by the International Criminal Court – over the thousands of state killings in his war on drugs since 2016.

Candidates have until Oct. 8 to register, but withdrawals and substitutions are allowed until Nov. 15, leaving scope for last-minute changes of heart.