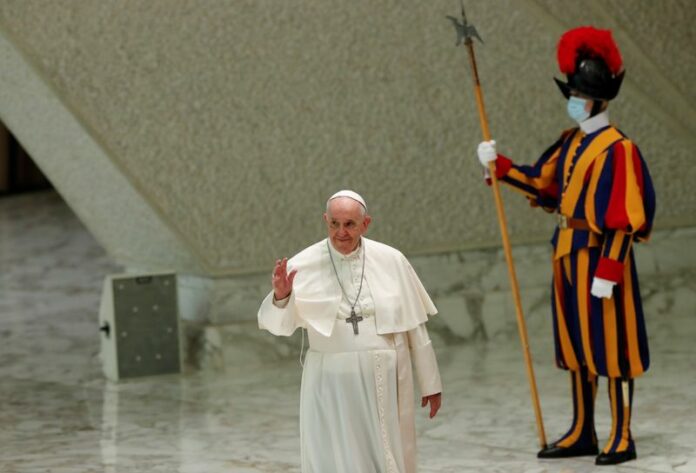 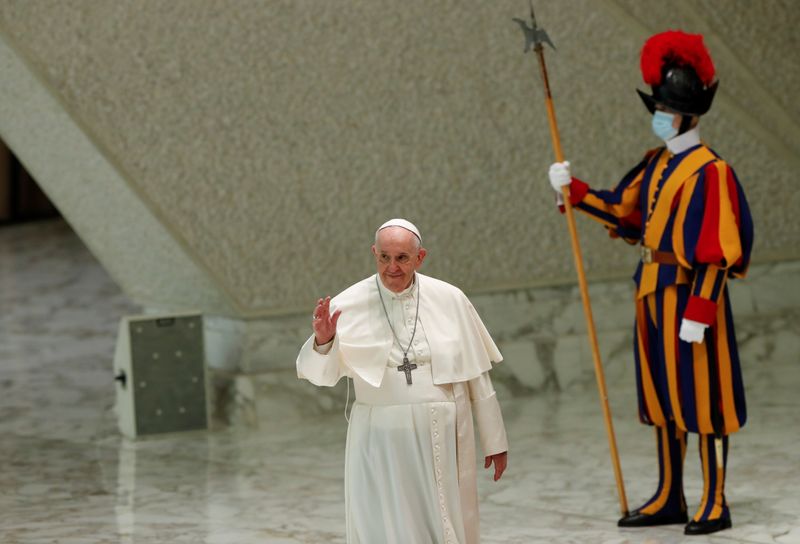 © Reuters. FILE PHOTO: Pope Francis waves as he arrives at the Paul VI Audience Hall for the weekly general audience at the Vatican, September 29, 2021. REUTERS/Remo Casilli

VATICAN CITY (Reuters) – Pope Francis and other religious leaders made a joint appeal on Monday for next month’s U.N. Climate Change Conference (COP26) to offer concrete solutions to save the planet from “an unprecedented ecological crisis”.

“COP26 in Glasgow represents an urgent summons to provide effective responses to the unprecedented ecological crisis and the crisis of values that we are presently experiencing, and in this way to offer concrete hope to future generations,” the pope said.”

“We want to accompany it with our commitment and our spiritual closeness,” he said in an address which he gave to participants instead of reading it, in order to give other leaders more time to speak.

“The climate crisis is great and is of our making,” Sharma told them.

Welby, spiritual leader of the world’s Anglicans, called for a “global financial architecture which repents of its past sins”, including changes in tax rules to promote green activity.

“We have in the past 100 years declared war on creation… Our war against the climate affects the poorest among us,” Welby said.

The appeal urges all governments to adopt plans to help limit the rise in the average global temperature to 1.5 degree Celsius above pre-industrial levels and to achieve net-zero carbon emissions as soon as possible.

Wealthier countries must take the lead in reducing their own emissions and in financing poorer nations’ emission reductions, it said.

“We plead with the international community, gathered at COP26, to take speedy, responsible and shared action to safeguard, restore and heal our wounded humanity and the home entrusted to our stewardship,” said the appeal’s executive summary, which was read out at the start of the meeting.

Several leaders stressed that no nation could go it alone.

“If one nation sinks, we all sink,” said Rajwant Singh, a Sikh leader from the United States, who sang a poem for the participants.

In his written address, Francis said cultural and religious differences should be seen as a strength, not a weakness, in defending the environment.

“Each of us has his or her religious beliefs and spiritual traditions, but no cultural, political or social borders or barriers prevent us from standing together,” he said.

The Vatican’s foreign minister, Archbishop Paul Gallagher, told Reuters on Sunday he hoped Monday’s meeting could “raise ambitions” on what can be achieved at Glasgow.

Scotland’s bishops said in July that the pope would attend the opening of COP26, health permitting. A decision is expected in the next few days.

Francis, 84, strongly supports the goals of the 2015 U.N. Paris accord to reduce global warming. He told young people at the weekend that theirs was “perhaps the last generation” to save the planet.

U.S. President Joe Biden returned the United States to the Paris accords after his predecessor Donald Trump pulled it out. Biden and the pope are expected to meet at the Vatican at the end of October.