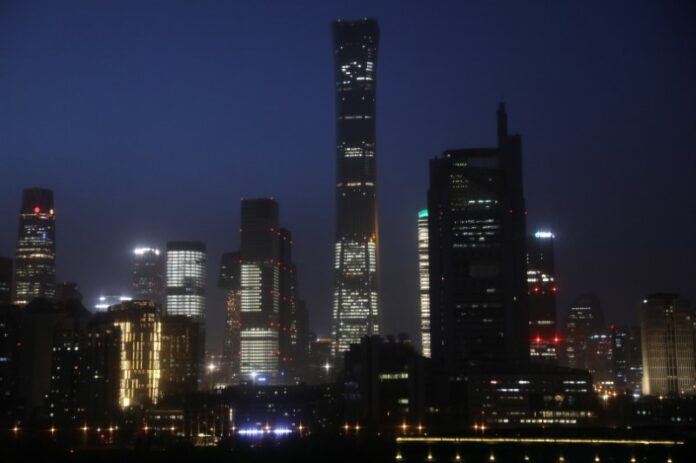 BEIJING (Reuters) – China risks slower growth if it does not do enough to spur market competition by allowing the private sector to play a bigger role in the economy and greater two-way flow in cross-border investments, a report showed on Tuesday.

“Without a market-oriented shift, China will struggle to maintain a growth potential that exceeds 3% annually by the middle of this decade,” according to a report released by U.S. think tank the Atlantic Council and consultancy Rhodium Group.

China’s economic growth has gradually eased from 2011 to 2020, expanding in the single-digits compared with the relatively big gains in the years just after it joined the World Trade Organization in late 2001. China has set a target to grow its economy by at least 6% in 2021 after it managed to eke out growth of 2.3% in pandemic-hit 2020.

While China has made progress in some areas such as trade, where it has cut tariffs to a level comparable with or below those of OECD economies, recent policy signs are at odds with a market-oriented course, the report said.

Beijing’s sweeping crackdown on private firms in sectors from technology to education this year has raised the prospect of stronger state control in the years to come, the report said.

The pursuit of a so-called “dual-circulation” strategy to make China less reliant on the outside world, backed by President Xi Jinping, also risks backtracking on years of tighter economic integration and interdependence, it said.

“President Xi’s pledge to make markets decisive at the start of his tenure is at risk of failure,” according to the report.

The report said a relative lack of access to overseas investments by ordinary Chinese people has led to an abundance of capital domestically, leading to overcapacity investment in many sectors at home.

Inadequate market competition and inefficiency will reduce productivity and in turn gross domestic product – “potentially by trillions of dollars within five years”, it warned.

Chinese reform advocates say Beijing has been avoiding potentially disruptive changes due to worries over economic and social stability and resistance from vested interests such as powerful state-owned companies, which Xi has described as the champions of the economy.