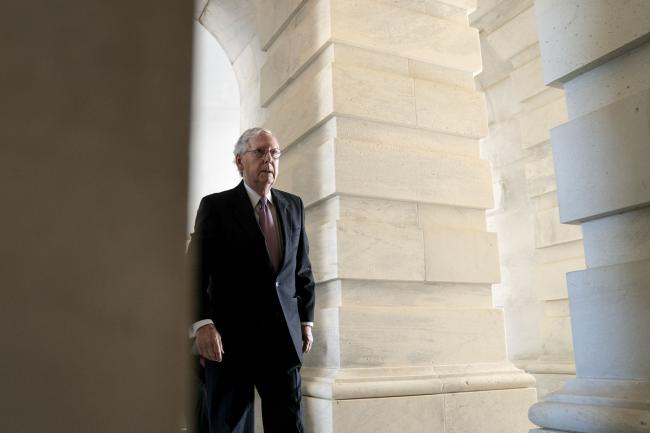 © Bloomberg. Senate Minority Leader Mitch McConnell, a Republican from Kentucky, arrives at the U.S. Capitol in Washington, D.C., U.S., on Thursday, Sept. 30, 2021. President Biden is poised to avoid a disruptive shutdown of the federal government, but deal-making continues on his economic agenda before a planned Thursday vote on an infrastructure package that underscores deep divisions among Democrats.

(Bloomberg) — Senate Republican leader Mitch McConnell told President Joe Biden he should pressure Democratic leaders in Congress to go ahead and raise the debt limit on their own because the GOP won’t cooperate.

In a letter to Biden Monday, McConnell demanded that the president “engage directly with congressional Democrats on this matter” and said Republicans will not be changing their position.

“Bipartisanship is not a light switch that Speaker Pelosi and Leader Schumer can flip on to borrow money and flip off to spend it,” McConnell wrote, referring to Nancy Pelosi and Chuck Schumer. “Republicans’ position is simple. We have no list of demands. For two and a half months, we have simply warned that since your party wishes to govern alone, it must handle the debt limit alone as well.”

Biden plans to speak on Monday on the need for Congress to address the debt ceiling.