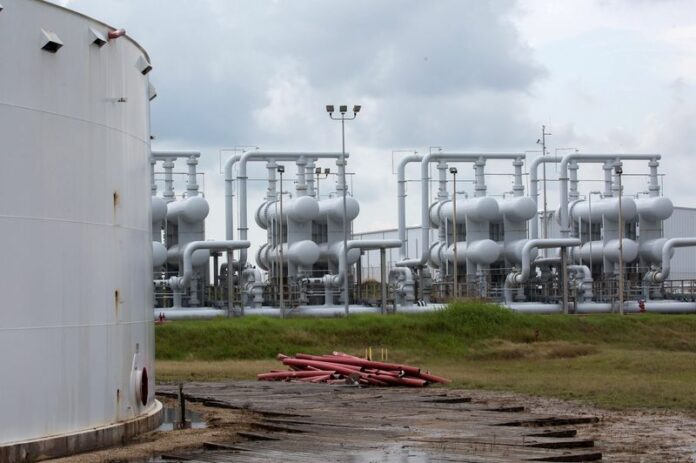 © Reuters. FILE PHOTO: An oil storage tank and crude oil pipeline equipment is seen during a tour by the Department of Energy at the Strategic Petroleum Reserve in Freeport, Texas, U.S. June 9, 2016. REUTERS/Richard Carson/File Photo

TOKYO (Reuters) – Oil prices climbed on Tuesday, hitting their highest levels in at least three years, extending gains triggered during the previous session after the world’s major oil producers announced they had decided to keep a cap on crude supplies.

The Organization of the Petroleum Exporting Countries (OPEC) and its allies including Russia, collectively known as OPEC+, said on Monday it would maintain an agreement to increase oil production only gradually, ignoring calls from the United States and India to boost output as the world economy recovers, if patchily, from the coronavirus pandemic.

Oil prices have already surged more than 50% this year, a rise that has added to inflationary pressures that crude-consuming nations are concerned will derail recovery from the pandemic.

Despite the pressure to ramp up output, OPEC+ was concerned that a fourth global wave of COVID-19 infections could hit the demand recovery, a source told Reuters a little before the vote.

“We expect a gradual normalisation in demand growth and a rebound in supply will start to weigh on oil prices from the fourth quarter,” Capital Economics said.

“This year, growth in demand has outpaced supply, helping prices to hit multi-year highs, but we expect this dynamic to reverse as OPEC+ ramps up production,” Capital said in a note.

Meanwhile U.S. crude oil and distillate inventories are likely to have fallen last week, according to a preliminary Reuters poll. [EIA/S]

Five analysts surveyed by Reuters estimated on average that crude inventories declined by about 300,000 barrels in the week to Oct. 1.