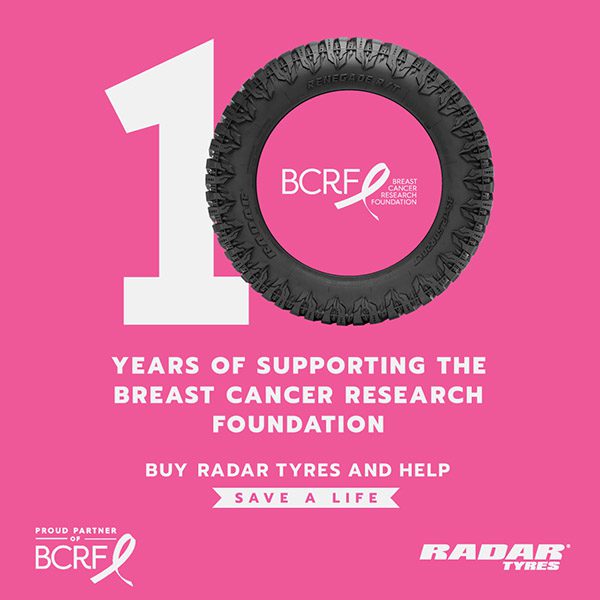 Omni United, has announced its ten-year milestone of supporting the Breast Cancer Research Foundation (BCRF) through its flagship brand Radar Tyres. It was in 2011 that the company launched its #MobilisingHope campaign to support BCRF, the highest-rated breast cancer organisation in United States, in its mission to prevent and cure breast cancer by advancing the world’s most promising research. Since then, each year Omni has been pledging its support to BCRF, with 2021 being its 10th consecutive year. In addition to the company’s monetary support, it also spreads awareness about this cause through various programmes with its brand ambassadors as well as distributors and dealers.

As the company looks at this milestone event, it would like to thank all the distributors, dealers, business associates, as well as the end-users for the continued support throughout the years. Each and everyone’s vital support has helped create a long-lasting effect on our community and the communities our customers, business associates and families live in. Despite the uncertainty of the pandemic over the last 18 months, Omni United has continued to believe in the strong importance of their partnership with BCRF and the lifesaving research it advances.

“We have always believed in giving back to society and breast cancer is a cause that we have been deeply committed to supporting over the years. We admire the wonderful work that the Breast Cancer Research Foundation has been doing to advance the best research and to ultimately be the end of breast cancer. We will continue supporting BCRF in its mission.” – GS Sareen, President and CEO, Omni United.

Breast cancer is a cause that has always been close to the company’s heart and in line with our core value of giving back to society. It was in 2011 that Omni United and Radar Tyres embarked on this journey of supporting BCRF by launching “Mobilising Hope,” a programme that has included donations generated by sales of Radar tyres and annual contributions. In 2021, Omni pledged a minimum donation of US$50,000 regardless of sales, which will bring its cumulative giving to BCRF to nearly US$1.4 million in support of 28,000 hours of critical research.

Over the last ten years, the programme has evolved and grown with more and more dealers joining in to support the cause, especially during October, which is recognised as Breast Cancer Awareness Month. Some highlights from its programmes include:

Launching a limited edition “pink sidewall” tyre, sold through a major distributor in the US.
Encouraging our customers, tyre distributors, dealers and retailers throughout the world, to support the Mobilising Hope campaign by providing them with in store displays, pink ribbons and other awareness materials to distribute among end-users.

Displaying the logo of BCRF on all Radar Tyres motorsports teams racing cars and gear.
Supporting BCRF in all international tyre fairs and other events in which Omni and RadarTyres participates.
Launching awareness and fundraising programmes in partnership with our brand ambassador Jodi Ewart Shadoff and Play for P.I.N.K., a grassroots organisation that uses lifestyle and sporting events to raise funds for breast cancer research. BCRF is Play for P.I.N.K.’s sole beneficiary.Omni United’s flagship brand Radar Tyres signed Jodi as its brand ambassador in 2016. Throughout the years, Jodi has pledged her support for Play for P.I.N.K. and BCRF by wearing pink gear as a symbol of hope and courage to further increase the visibility of the cause. Over the last three years(2018-20) Jodi has also donated $100 for every birdie she made in LPGA tournaments during October to BCRF through this partnership.“Breakthroughs in research take time and tenacity. It is only through sustained support that we can fuel the innovations that drive improvements in care and outcomes. We are grateful for Omni United’s unflagging, decade-long commitment to women’s health” – Myra J. Biblowit, President and CEO, BCRF.Radar Tyres is a design-driven brand, offering safety, performance and sustainability for all. The brand’s mission is to make premium vehicle ownership accessible to all, by offering fitments with a unique combination of technology and sustainability, designed and engineered without compromise. Distributed in over 50 countries, Radar Tyres offers a wide selection of patterns, fitments and performance attributes. This unique range of choices allows any driver, in collaboration with our skilled global dealer network, to select the perfect fitment for their vehicle and their unique requirements.

Omni United has always believed in giving back to society. In addition to supporting the Breast Cancer Research Foundation, the company’s flagship brand, Radar Tyres has been manufactured carbon neutral since 2013.