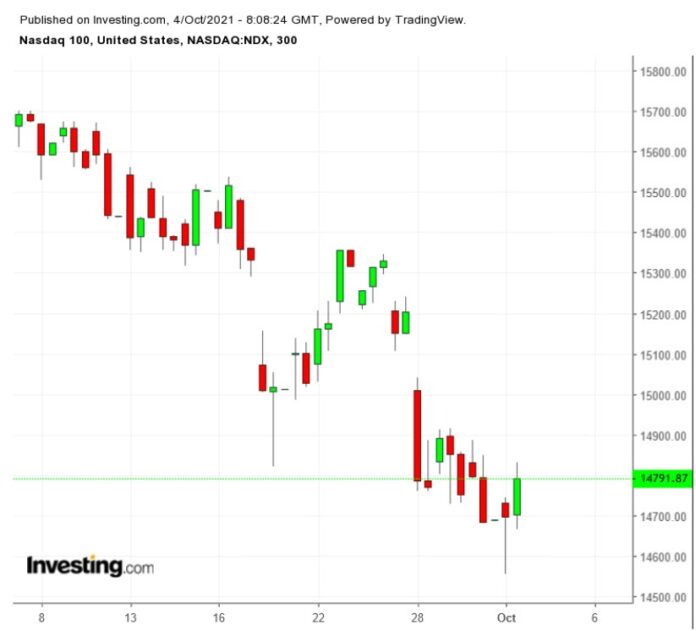 For market watchers, the perceived wisdom about September is legendary—it’s often the worst month of the year. September 2021 fully lived up to that billing.

Stocks must now still get through October, which has its own ‘mythology,’ dubbed the “October Effect,” since it too can be very dangerous for investors. Indeed, the risks could start with this coming Friday’s jobs report.

The losses produced during September seem to have surprised most investors and Wall Street. 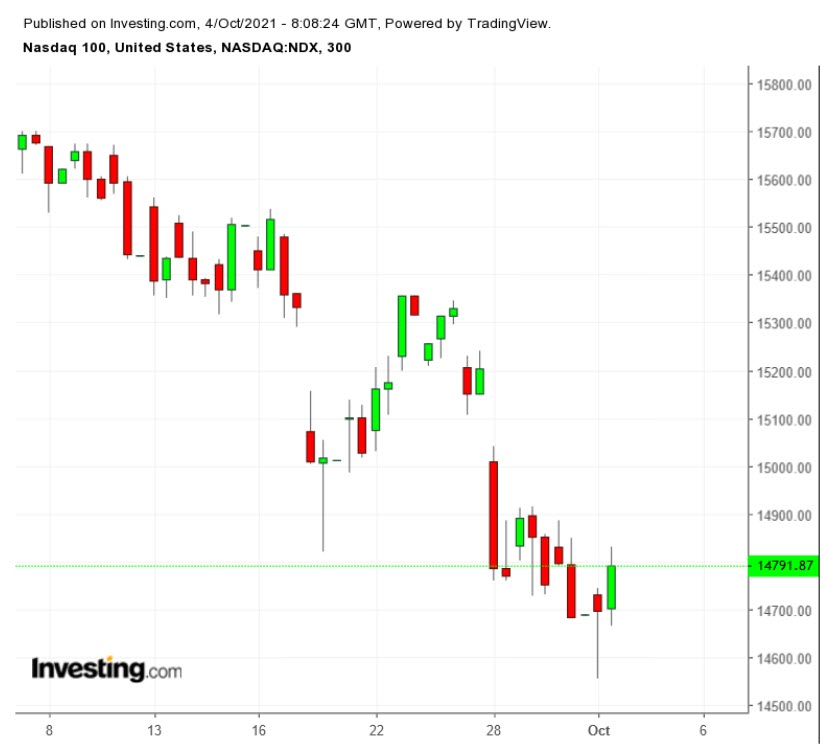 The NASDAQ 100, representing the biggest tech stocks and some of the fastest growing companies, dropped 5.7%, by far its largest monthly loss of the year and worst since March 2020.

Volatility pressured the S&P 500’s gain for the year, which fell from nearly 21% on Sept. 2 to 14.7% at the end of the month. The broad benchmark had recorded both a record close and 52-week high on Sept. 2, then fell back from there.

Meanwhile, the Dow experienced four days during which daily gains or losses amounted to 500 points or more.

Still, the major indices continue to sport healthy gains for the year, with the S&P 500 up 16% after Friday’s rally. The Dow finished the month up 12.2%, and the NASDAQ is sporting a 13% accrual. Nonetheless, the third quarter produced mixed results. The S&P 500 barely broke even; the NASDAQ dipped 0.4%, and the Dow dropped 1.9%.

The pullback wasn’t limited to stocks.

Copper, one of the purest indicators of global economic demand, fell 6.5%, down 4.7% for the third quarter.

Interest rates started to move higher as the Federal Reserve said it would begin to normalize its activities and signaled rates will probably rise next year. The 10-year Treasury yield hit 1.58% on Tuesday, settling at 1.49% at month’s end, a 14.2% acceleration for the month. But that still was the below the Mar. 31 close of 1.75%.

The pullback in U.S. markets mirrored results around the world, a function of how integrated markets have become. The S&P Global Broad Market Index, which tracks results from a host of benchmarks around the world, was off 4.1% in September, though up 0.4% for the quarter.

The September results included big abrupt gains and losses. The S&P 500 dropped 52 points on Thursday and added nearly 50 points on Friday, an indication that computers were doing most of the buying and selling.

The volatility seen throughout the month, but especially at September’s end, has stoked fears that markets—even globally—could pull back in the fourth quarter and perhaps beyond.

A variety of causes are fueling the worries. They include:

COVID-19. The Delta variant is hitting much of the world extremely hard, causing—at least until recently—rising hospitalization rates in the United States. U.S. deaths from the pandemic have topped 700,000 as of last week, and fatality rates are still climbing, despite entreaties and even threats of firing to employees who will not get vaccinated.
Supply-chain issues. Try ordering and even getting a new refrigerator or a new car. Supplies of computer chips and other components made outside the United States have been very tight as the virus hits work forces in Asia and elsewhere.
Inflation fears. Prices have been rising all year because of the logistical problems created by the spread of the virus. And central bankers and economists are realizing those pressures may not ease until 2022 or later.
Anxiety produced by nonstop wrangling over legislation in the U.S. Congress and the prospect of bitter elections in 2022 and 2024. In addition, the Biden Administration’s withdrawal of all American forces from Afghanistan has eroded some of the administration’s support.
Worries that central banks will start to slow stimulus efforts and raise interest rates, perhaps next year, to cap inflationary pressures.
Chinese economic and political uncertainty. The Chinese government is banning cryptocurrencies and cracking down on many of its globally-focused companies, particularly those that operate in the tech sector. You can see the investor reaction via Hong Kong’s Hang Seng Index, down 5.6% in September, 14.8% in the third quarter and 9.8% for the year.

And, as anyone who remembers the October 1987 crash or the 2008 crash (or both), can attest October can be frightening. Since 1928, there have been 25 days when the market has slid 7.5% or more and eight of those have been in October. Half of those occurred in 1987 and 2008, according to Howard Silverblatt of S&P Dow Jones Indexes.

Seven of the top 10 S&P 500 stocks in September were energy stocks. 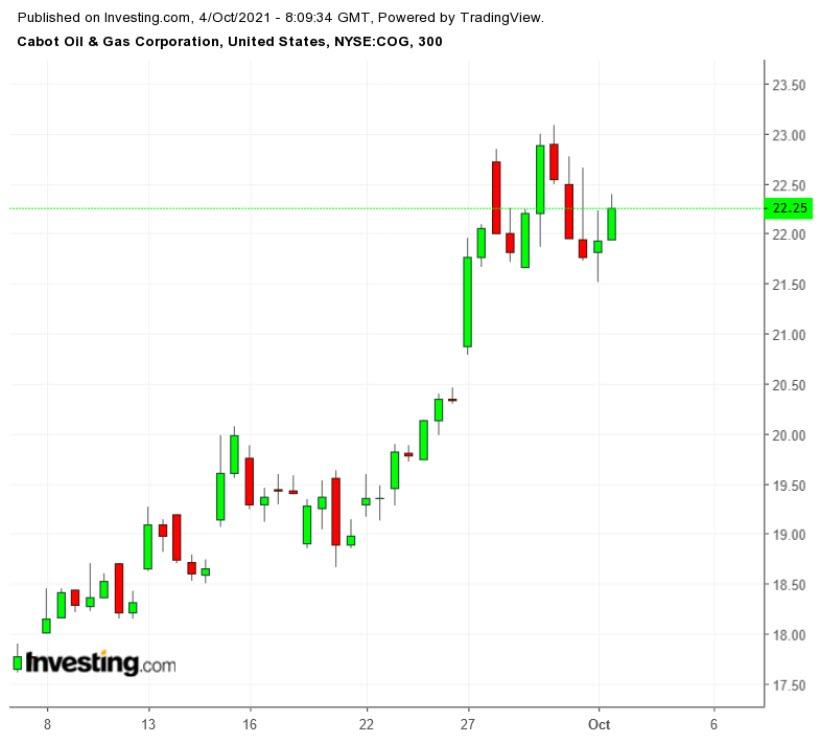 The top performer was Cabot Oil & Gas (NYSE:COG), up 36.9% for the month, +33.7% for the year. (Note: as of the end of September, a deal to merge Cabot Corp. (NYSE:CBT) with Cimarex Energy was approved by shareholders. The deal is expected to close in late Q4 with the new company rebranded as Coterra Energy.)

Along with leading the S&P 500 year-to-date, the sector has produced the biggest gains in both the S&P 400 and S&P 600 indices as well. All the gains reflect investor expectations that oil prices, along with demand, will continue to strenghten for the foreseeable future.

The U.S. oil rig count has nearly doubled in the last 12 months, according to Baker-Hughes statistics. However, that’s still off about 75% from the high during the summer of 2008.

How long the energy sector remains in the top spot is open to debate. Over the last three years, according to S&P data, the sector FELL 29.4% as oil prices slumped.

Over the same three year period, the Technology sector was up 98.5%. During September, however, the sector slumped, -5.8%.

The worst performing sector in September was materials, including metals and gold stocks. Steelmaker Nucor (NYSE:NUE) was off 16.2% for the month. (Gold fell 3.4% in September, down 7.2% for the year.) 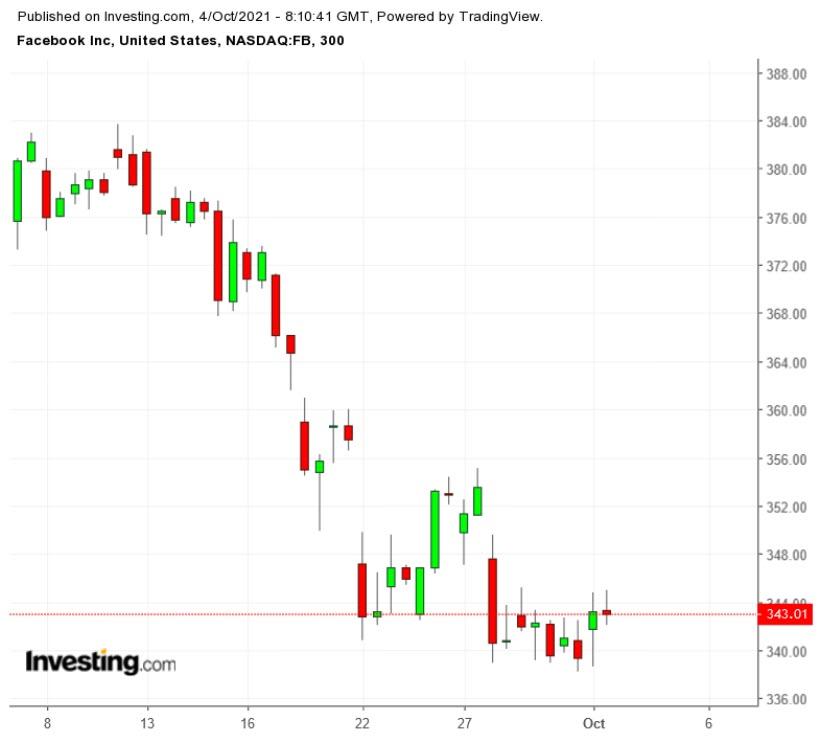 Social media behemoth Facebook (NASDAQ:FB) was off 10.4%. Its market capitalization dropped below $1 trillion.

For investors paying attention, none of this should be a complete surprise. The market has been showing signs of topping for some time.

Next, relative strength indices (RSIs) for the S&P 500, NASDAQ and NASDAQ 100 indices had all topped 70 in early July. Those were clear signals that the indices were getting frothy. An RSI is a widely watched measure of market momentum. When it tops 70, it suggests some selling is likely to occur, though it doesn’t signal when.

Another red flag indicating market wariness is Barchart.com’s daily calculation of net new highs. This is the difference between new 52-week highs and new 52-week lows.

That number hit 822 on Mar. 12, with 823 stocks setting new highs and just one hitting a new low. This past Thursday, the number was -58. There were 77 stocks showing new highs while 135 fell to new lows. The trend line on net new highs has slowly moved lower since that March peak.

That said, second-quarter profits mostly beat estimates and a significant number fo analysts anticipate strong third-quarter earnings as well. Employment is at least stable; first-time jobless claims were under 400,000 in the latest week but up a bit over the last three.

The Federal Reserve wants to reduce its impact on money markets. It may begin to trim its bond purchases during the last quarter of the year and start to raise interest rates beginning in 2022. The thought of higher rates scares Wall Street. Investors and stock-market-history junkies know that the 1987 and 2008 market crashes were preceded by rate increases.

But several big unknowns must also be watched: can the pandemic be brought under control? Will inflationary pressures caused by supply-chain issues and higher commodity costs—especially for energy and materials—keep markets in check? Ongoing worries around geopolitical issues both in the United States and abroad could add to market jitters as October’s first full week of trading begins.