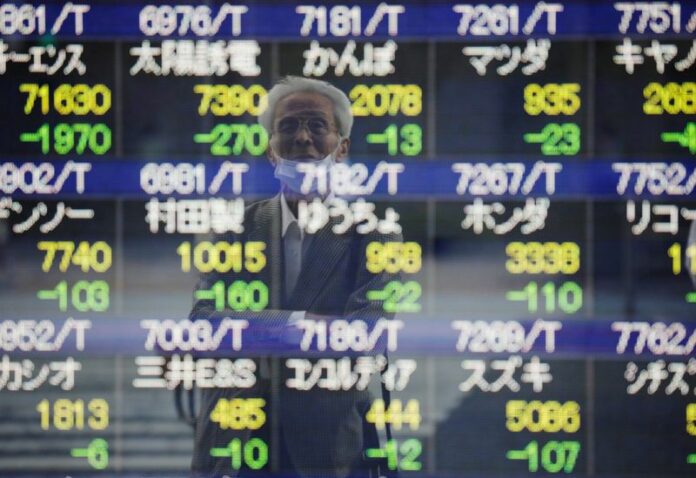 © Reuters. FILE PHOTO: A man wearing a protective mask, amid the COVID-19 outbreak, is reflected on an electronic board displaying stock prices outside a brokerage in Tokyo, Japan, September 21, 2021. REUTERS/Kim Kyung-Hoon

By Herbert Lash and Danilo Masoni

NEW YORK/MILAN (Reuters) -Global equity markets rose on Tuesday as tech stocks rebounded on Wall Street and the dollar regained strength ahead of U.S. payrolls data on Friday that is seen as key to the Federal Reserve’s next move on tapering its support to the economy.

The major U.S. stock indices rose more than 1% as did most European bourses, while yields on the 10-year U.S. Treasury note, a touchstone for investor sentiment, edged above 1.5% and a surge in oil prices continued to fuel inflation fears.

The focus was on Friday, when the U.S. unemployment report for September may indicate when the Fed moves forward with its plans to begin tapering its $120 billion a month of bond purchases.

“I don’t want to read a whole lot into today’s market action other than a rebound after a weak stretch,” said Peter Tuz, president of Chase Investment Counsel in Charlottesville, Virginia.

Friday’s report “will be telling about the direction of both interest rates and the economy, and by definition the equity markets as well,” Tuz added.

Non-farm payrolls data is expected to show continued improvement in the labor market, with a forecast for 488,000 jobs to have been added in September, a Reuters poll showed.

MSCI’s gauge of global stocks rose 0.72%, held down after hitting a more than three-month low overnight in Asia.

Short-dated yields have jumped as the U.S. Treasury eyes Oct. 18 as when it could run out of cash. The U.S. Senate is expected to take up a bill passed by the House of Representatives this week suspending the limit on Treasury borrowing through 2022.

The dollar index, which tracks the greenback versus a basket of six currencies, rose 0.08% to 93.917.

Brent crude futures rose to a three-year high while U.S. benchmark oil hit its highest since 2014 after the Organization of the Petroleum Exporting Countries and allies stuck to their planned output increase rather than pumping even more crude.

Market focus in Asia was on whether embattled property developer China Evergrande https://www.reuters.com/business/china-evergrande-share-trading-halted-hong-kong-2021-10-04 would offer any respite to investors looking for signs of asset disposals.

Trading in shares in the world’s largest indebted developer was halted on Monday but other Chinese property developers grappled with ratings downgrades on worries about their ability to repay debt.

Bitcoin rose above the $50,000 mark for the first time in four weeks, adding to a series of gains since the start of October. It was last up 1.75% on the day.