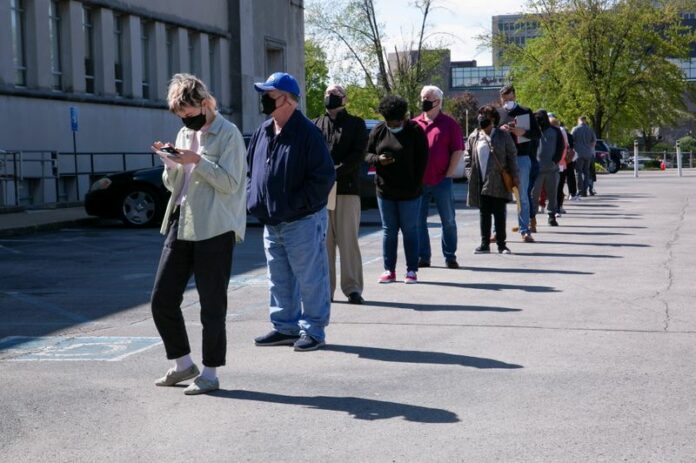 The ADP National Employment Report released on Wednesday supported expectations that job growth picked up last month, though it has a poor record predicting the private payrolls count in the Labor Department’s more comprehensive and closely watched employment report.

September’s employment report due on Friday will garner more attention after the Federal Reserve signaled last month that it would likely begin reducing its monthly bond purchases as soon as November. Fed Chair Jerome Powell believes the economy is one “decent” monthly employment report short of meeting the U.S. central bank’s threshold for tapering its bond buying program.

“It looks like the gain in employment will qualify as ‘decent’,” said Paul Ashworth, chief economist at Capital Economics in Toronto. “Nevertheless, it is worth remembering that the first estimate from the ADP is not a particularly good predictor of official payrolls.”

Private payrolls increased by 568,000 jobs last month, the ADP National Employment Report showed. Data for August was revised lower to show 340,000 jobs added instead of the initially reported 374,000. Economists polled by Reuters had forecast private payrolls would increase by 428,000 jobs.

Employment gains averaged 410,000 jobs in the third quarter, a slowdown compared to the second-quarter average of 748,000. Last month, the leisure and hospitality industry added 226,000 jobs after creating 155,000 positions in August.

Manufacturing payrolls increased by 49,000 jobs, while hiring at construction sites also rose by 49,000. Job gains in other sectors were modest. Large firms accounted for the bulk of job creation, followed by medium-sized companies. Small business hiring climbed by 63,000 jobs after rising 61,000 in August.

The ADP report is jointly developed with Moody’s (NYSE:MCO) Analytics. It has a poor record predicting the private payrolls count in the department’s Bureau of Labor Statistics (BLS) employment report because of methodology differences.

Stocks on Wall Street fell as the ADP report fanned fears that the Fed could tighten monetary policy sooner than expected. The dollar rose against a basket of currencies. U.S. Treasury prices were higher.

Expectations that the Fed will soon start to withdrew some of the monetary support to the economy have boosted mortgage rates, hurting refinancing activity and demand for home purchase loans. A report from the Mortgage Bankers Association on Wednesday showed mortgage applications dropped 6.9% last week from the prior week.

Refinance applications tumbled 9.6% from the previous week and were down 16% from a year ago. Applications for loans to buy a home dropped 1.7% from a week ago. The 30-year mortgage fixed rate rose four basis points to 3.14% last week, the highest since July.

The pick-up in private payrolls suggests the economic expansion remains on track even as gross domestic product growth appears to have slowed sharply in the third quarter because of the resurgence in COVID-19 infections in summer and relentless shortages that have undercut motor vehicle sales.

The Atlanta Fed is predicting that GDP growth braked to a 1.3% annualized rate in the July-September quarter. The economy grew at a 6.7% pace in the second quarter.

“Stronger job growth in September could indicate that the drag on hiring from the recent increase in coronavirus cases is fading,” said Gus Faucher, chief economist at PNC Financial (NYSE:PNC) in Pittsburgh, Pennsylvania.

According to a Reuters survey of economists, nonfarm payrolls likely increased by 473,000 jobs in September. The economy created 235,000 jobs in August, the fewest in seven months. Estimates range from as high as 700,000 jobs to as low as 250,000. The unemployment rate is forecast dipping to 5.1% from 5.2% in August.

But labor market indicators were mixed in September. A survey from the Conference Board last week showed consumers’ views of current labor market conditions softened.

The number of people on state unemployment rolls fell in mid-September relative to mid-August. The Institute for Supply Management’s measure of manufacturing employment rebounded last month after contracting in August. But the ISM’s gauge of services industry employment slipped, with businesses reporting that “labor shortages (were) experienced at all levels.”

The economy is experiencing an acute shortage of labor as the pandemic forced some people to drop out of work to become caregivers. Others are reluctant to return for fear of contracting the virus, while some have either retired or are seeking career changes.

There were a record 10.9 million job openings at the end of July. Economists are cautiously optimistic that the labor crunch will start easing in the fall and through winter after the expiration in September of federal government-funded unemployment benefits, which businesses and Republicans blamed for the worker shortage.