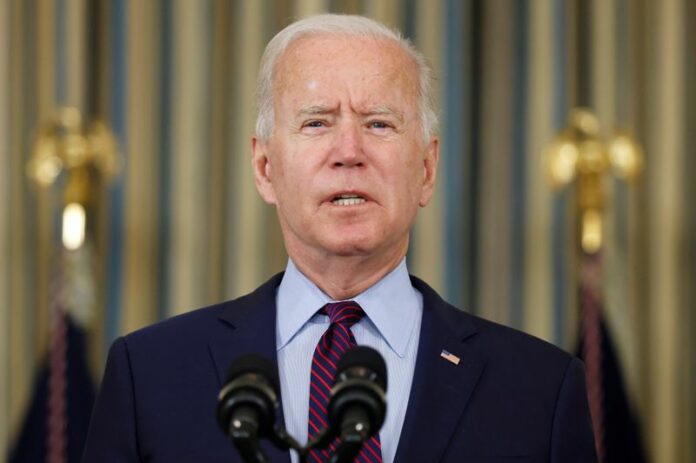 By Jarrett Renshaw and Trevor Hunnicutt

HOWELL, Mich. (Reuters) -President Joe Biden warned on Tuesday that failure to pass his huge social and infrastructure spending package could contribute to America’s decline, while lawmakers in his Democratic Party wrangled over its price tag.

Squabbling Democratic moderates and progressives dealt Biden a setback last week when they failed to move ahead with his proposed $1 trillion infrastructure bill or a planned $3.5 trillion social spending bill, which is now facing cuts.

“These bills are not about left versus right or moderate versus progressive,” Biden said in Michigan, arguing the bills would make the United States more competitive and restore its role as a world leader.

“We’re at risk of losing our edge as a nation … To oppose these investments is to be complicit in America’s decline,” he said.

Democrats fear that if they fail to pass the infrastructure bill they could be punished by angry voters in November 2022 congressional elections. Rebuilding U.S. infrastructure was one of Biden’s main election promises.

The larger “Build Back Better” bill Biden proposed includes childcare, housing and healthcare benefits, free community college tuition and clean energy subsidies, all of which the White House said would not increase the country’s debt because they would be paid for by taxes on the wealthy and corporations.

Biden said the investments were urgent, citing such adversaries as China, which he said had spent around three times as much as the United States on infrastructure as a share of its economy.

“Our competitors aren’t hanging around waiting to see what we’re going to do,” he said.

Before leaving Washington, Biden met virtually with moderate Democratic members of the U.S. House of Representatives about the infrastructure bill and his Build Back Better agenda.

The White House described the meeting as productive, noting in a statement that the group “renewed their commitment to getting each bill passed so that we can make investing in families the heart of our economic growth strategy.”

Biden held a similar meeting with progressives on Monday.

Biden allies worry that his planned programs, many of which opinion polls show are popular with a majority of Americans, have been lost in the legislative wrangling.

Michigan is an election battleground state that Biden flipped from Republican to Democratic in 2020. The White House said aging infrastructure has slowed commutes for Michigan residents and that many lack access to broadband internet and childcare.

Biden was in Howell, a city of about 9,500 located roughly 55 miles (90 km) west of Detroit, visiting an International Union of Operating Engineers training facility. The town sits in the highly competitive 8th congressional district. Voters there picked Trump in 2020 but also returned Democratic Representative Elissa Slotkin to Congress.

Slotkin supports the $1 trillion roads-and-bridges bill and has advocated for elements of the broader social-spending legislation but said she would need to review the plan in full.

Progressive (NYSE:PGR) House Democrats have said they will not vote for the infrastructure bill until they get backing for Biden’s social spending bill, whose price tag has caused some moderates to balk. The dispute forced Democratic leaders last week to postpone a vote scheduled on the smaller infrastructure measure, which has already secured bipartisan Senate support.

Biden has said the size of the social spending bill will have to come down to win over two Senate Democratic moderates, Kyrsten Sinema and Joe Manchin. Their support is necessary because all Senate Republicans oppose the larger bill and every Democratic vote is needed for passage.

In his virtual meeting with progressives on Monday, Biden put forward a range of $1.9 trillion to $2.2 trillion for the social spending reconciliation package, a House Democratic aide said.

The aide said the chair of the 95-member Congressional Progressive Caucus, Representative Pramila Jayapal, suggested that range would be too low to fit all of the programs that the president previously told Congress were priorities.