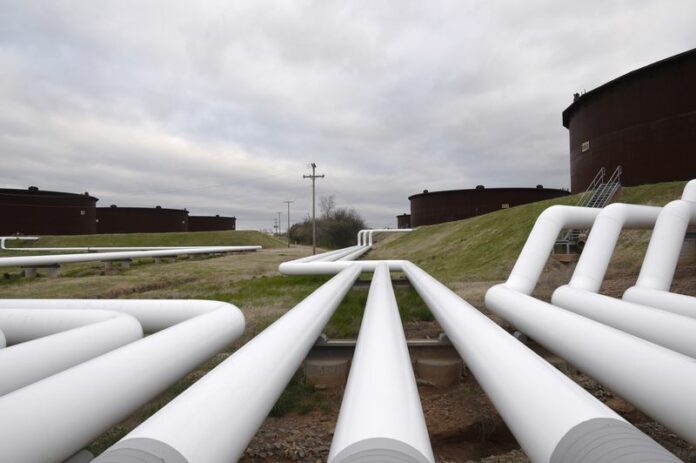 (Corrects to show U.S. stocks rose, not fell in paragraph 8)

LONDON (Reuters) -Oil prices extended losses from the previous session on Thursday, as the United States said it was considering selling oil from its strategic reserves and as Russia said it was ready to stabilise the natural gas market.

Both contracts fell about 2% on Wednesday.

“The crude market might be less tight should the United States tap the strategic crude reserves and if Russia manages to send more natural gas to Europe, this might result in less substitution from natural gas to crude,” said UBS analyst Giovanni Staunovo.

Granholm also did not rule out a ban on crude exports, which was lifted in 2015.

Goldman Sachs (NYSE:GS) said a likely SPR release, which could be up to 60 million barrels, only posed a $3 downside risk to its $90/bbl year-end Brent price forecast.

Stocks rose by 2.3 million barrels, the U.S. Energy Information Administration said, against expectations for a modest dip of 418,000 barrels. [EIA/S]

Russian President Vladimir Putin said on Wednesday that Russia was boosting gas supplies to Europe, including via Ukraine, in response to the energy crunch and stands ready to stabilise the market amid surging prices.

Such a move could help cool off record high gas prices.

Analysts say as winter approaches those gas prices could have an impact on the already tight crude market as some users switch to oil.

Earlier this week, the Organization of the Petroleum Exporting Countries and allies (OPEC+) agreed to stick to its plan to raise output by 400,000 bpd in November, sending crude prices to multi-year highs.

OPEC+’s decision was partly driven by concern that demand and prices could weaken, sources close to the group told Reuters.