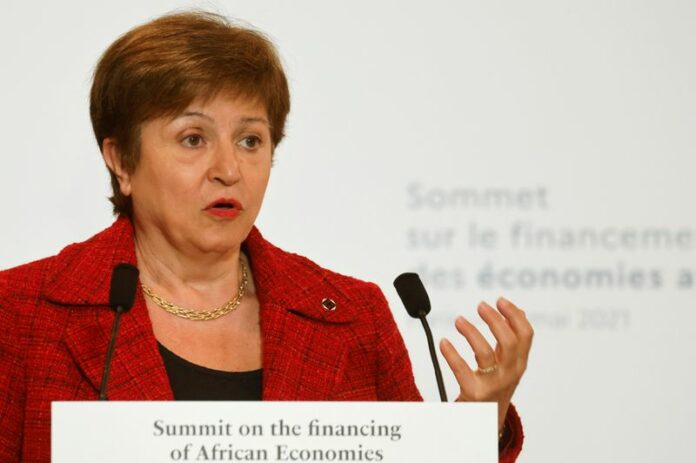 © Reuters. FILE PHOTO: International Monetary Fund (IMF) Managing Director Kristalina Georgieva speaks during a joint news conference at the end of the Summit on the Financing of African Economies in Paris, France May 18, 2021. Ludovic Marin/Pool via REUTERS

PARIS (Reuters) – Data-rigging allegations against International Monetary Fund chief Kristalina Georgieva fall short of directly implicating her, a French Finance Ministry source said on Monday ahead of a board meeting to decide her fate.

Claims that she pressured World Bank staff to change data to boost China’s “Doing Business” ranking when she was World Bank CEO are looming over the opening of week-long IMF-World Bank annual meetings on Monday.

Georgieva has strongly denied the allegations, which date back to 2017.

The IMF’s 24-member board plans to meet on Monday to decide Georgieva’s future, people familiar with the plans said on Sunday after meeting with her and the law firm that made the allegations.

“Our opinion is that most of the elements are on the table, (and) the law firm’s report does not detail precise elements that would directly call the director general into question,” the French Finance Ministry source said.

“That’s why France gave its support to the director general and would like that today we can take a decision, as the board said ‘very soon’, to get on with the IMF’s work,” the source added.

France and other European governments on Friday backed Georgieva, a Bulgarian economist, to complete her term as IMF chief, while U.S. officials and others had sought more time to study the differing accounts about data irregularities.

Europe’s backing is important since the IMF chief has traditionally been chosen by European governments, with the U.S. administration nominating the World Bank’s president.