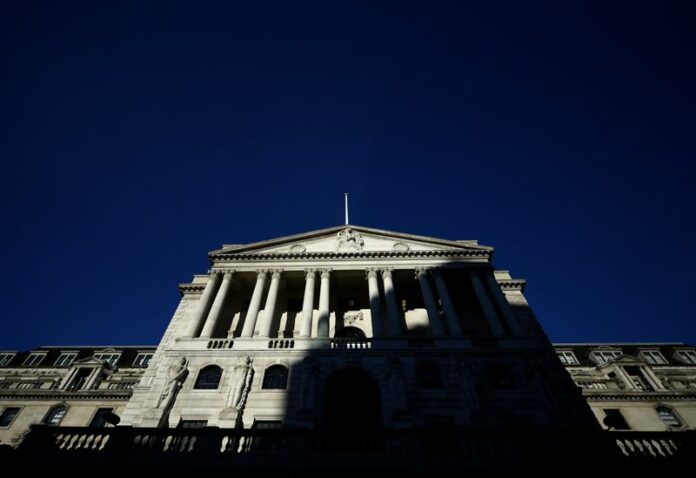 Explainer-Why is the Bank of England talking about raising rates? 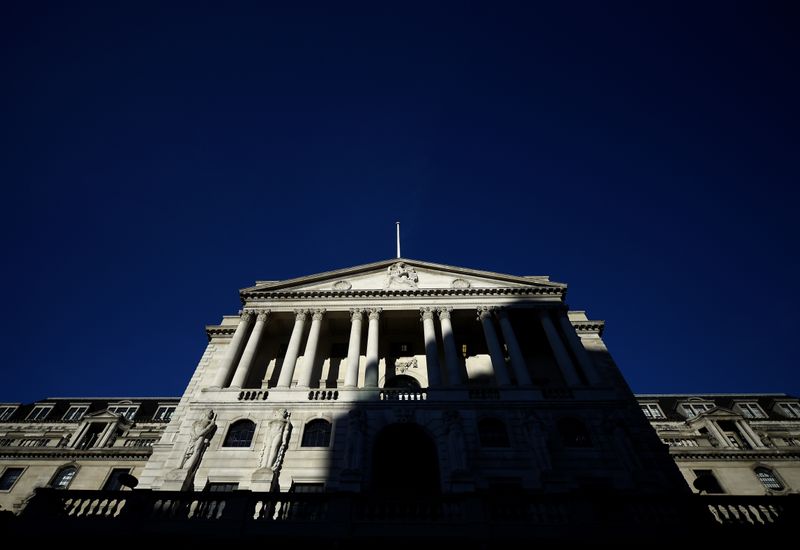 © Reuters. FILE PHOTO: An adjacent building throws a shadow accross the Bank of England in the City of London, Britain, December 12, 2017. REUTERS/Clodagh Kilcoyne

LONDON (Reuters) – Under pressure to act as inflation jumps towards double its 2% target, the Bank of England appears to be gearing up to be the first of the world’s big central banks to raise interest rates since the coronavirus pandemic struck.

Governor Andrew Bailey said in an interview published on Friday that inflation running above target must be managed to prevent it from becoming permanently embedded.

Michael Saunders, another Monetary Policy Committee member, said it was “appropriate” that markets had started to price in rate hikes much sooner than previously.

Here are some of the questions about the outlook for interest rates in the world’s fifth-biggest economy.

WHEN WILL THE BANK OF ENGLAND RAISE RATES?

Investors are betting the BoE could raise its benchmark Bank Rate from a record low of 0.1% possibly as soon as its Nov. 4 meeting, ahead of its U.S. and euro zone peers and following in the footsteps of central banks in Norway and New Zealand.

Financial markets are pricing at least two more hikes in 2022.

But some economists, concerned by a loss of momentum in Britain’s economy as it runs into post-lockdown shortages of supplies and staff, think the BoE will be forced to tighten policy only very gradually.

WHY IS THERE TALK OF HIGHER INTEREST RATES?

While Britain shares its supply chain problems, soaring energy prices and labour shortages with many countries around the world, investors have singled it out as a country especially prone to inflation and higher policy rates, with Brexit exacerbating the bottlenecks.

In recent weeks, Britain’s limited stocks of natural gas left it heavily exposed to rocketing wholesale prices, while a deficit of truckers left fuel pumps dry across the land.

The BoE said last month that consumer price inflation was on course to exceed 4% at around the end of the year and since then fuel prices and household energy costs have risen further.

Huw Pill, the BoE’s new chief economist, has said he is concerned that inflation would prove to be less transitory than the central bank had hoped.

No. Governor Bailey has said the BoE can do nothing about supply chain bottlenecks which have pushed up inflation. Similarly, energy prices are beyond the BoE’s control.

But some BoE officials appear worried that individuals and businesses might lose confidence in their ability to control inflation if they do not act soon.

The public increasingly appear to expect prices will rise more quickly and Prime Minister Boris Johnson has promised he will deliver a high-wage economy. But a Bank of America (NYSE:BAC) survey last week showed no expectations of higher wages, suggesting little risk so far of a damaging, 1970s-style wage-price spiral.

WHAT ARE THE ARGUMENTS AGAINST HIGHER RATES?

Some economists think the BoE should wait to make sure that higher rates would not further slow the economic recovery.

The government ended its jobs support programme while an estimated 1 million people were still on it and household budgets are due to be squeezed next year.

Along with higher energy bills, taxes are set to rise on workers to pay for health and social care, while state benefits have just been cut by the largest amount on record as the government ended another of its pandemic support measures.

There have also been signs that households may now be saving again in aggregate, rather than spending.

History is replete with instances of economic recoveries curtailed by premature attempts to return policy to normal, such as when the European Central Bank increased rates in 2011 following the financial crisis.

HOW MUCH WILL INTEREST RATES RISE?

The BoE has been clear that rates will stay at historically low levels, even if they do rise in the near future.

Still, investors and economists are divided over the likely extent of the hikes.

Interest rate futures show a roughly 90% chance of a 15 basis point rate hike by the end of the year, and fully price in a further 25 bp increase by midway through next year.

Some economists think the MPC will go much more slowly.

“We now think the MPC will hike Bank Rate in Q2 of next year to 0.25% but that’s all they will need to do next year and that they can wait a further 12 months before having to raise Bank Rate again,” said Samuel Tombs at Pantheon Macroeconomics said.

Former BoE policymaker Andrew Sentance said a single rate hike in the near term might not be enough to get to grips with the rise in inflation which could go as high as 6%.

“They need to send a signal that they’re prepared to do something about it and some gradual rises in interest rates would give that signal,” he told BBC radio.