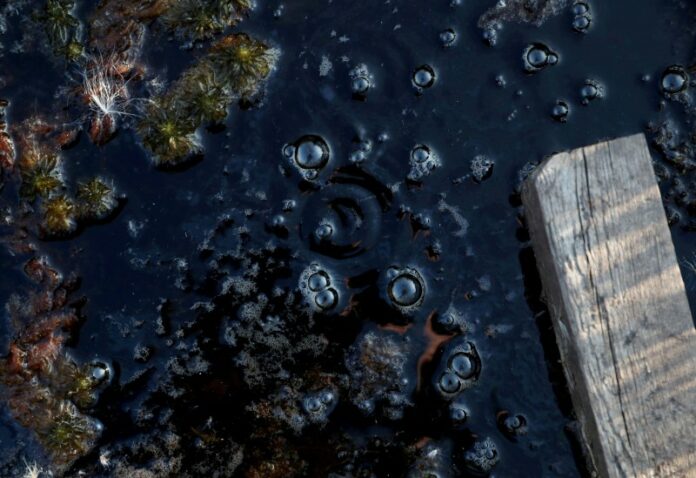 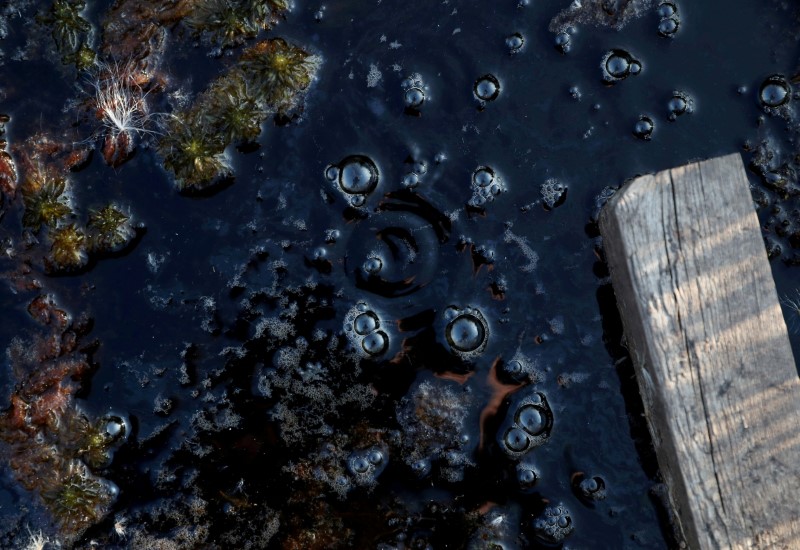 © Reuters. FILE PHOTO: Methane bubbles are seen in an area of marshland at a research post at Stordalen Mire near Abisko, Sweden, August 1, 2019.REUTERS/Hannah McKay

WASHINGTON (Reuters) – Two dozen countries have joined a U.S.- and EU-led effort to slash methane emissions 30% by 2030 from 2020 levels, giving the emerging global partnership momentum ahead of its launch at the U.N. climate summit in Glasgow later this month.

Nigeria, Japan and Pakistan are among the 24 new signatories to the Global Methane Pledge, which was first announced by the United States and EU in September with the aim of galvanizing rapid climate action before the start of the Scotland summit on Oct. 31.

The nine original partners include Britain, Indonesia and Mexico, which signed on to the pledge when it was announced https://www.reuters.com/business/environment/us-eu-make-diplomatic-push-cut-planet-warming-methane-emissions-documents-2021-09-14 last month.

Methane is a greenhouse gas and the biggest cause of climate change after carbon dioxide (CO2). Several recent reports have highlighted the need for governments to crack down on methane to limit global warming to 1.5 degrees C, the goal of the Paris climate agreement.

U.S. special climate change envoy John Kerry said he hoped to have more than 100 countries signed up in time for the COP26 climate summit.

“We look forward to welcoming all governments that are ready to tackle methane as the single fastest strategy that we have to keep a safer 1.5C future within reach,” Kerry said.

More than 20 philanthropic organizations, including ones led by Michael Bloomberg and Bill Gates, said on Monday they would mobilize over $223 million to support countries’ methane-reduction efforts.

“It’s one of those tools which can really assist us in avoiding the tipping point on climate change. This is a fast track solution,” Pakistan’s climate minister Malik Amin Aslam said.

Pakistan contributes less than 1% of the world’s emissions, but roughly a quarter of the country’s greenhouse gas output is methane.

“We all have different starting points and different local situations. But we also all have the possibility to reduce our methane emissions substantially,” European Commission Executive Vice President Frans Timmermans said.

A government official told Reuters the United States will engage with India and China to urge them to join the pledge in the weeks leading up to the U.N. climate summit.

Russian climate envoy Ruslan Edelgeriev said the country would analyze the initiative, but dd not confirm if it would join.

Methane has a higher heat-trapping potential than CO2 but breaks down in the atmosphere faster. A landmark U.N. scientific report released in August said “strong, rapid and sustained reductions” in methane emissions, in addition to slashing CO2 emissions, could have a fast impact on the climate.

The United States is due to release oil and gas methane regulations in the coming weeks, and the European Union will unveil detailed methane legislation later this year.

Canada will also bring forward regulation to cut methane emissions from the oil and gas sector at least 75% by 2030 from 2012 levels, climate minister Jonathan Wilkinson said on Monday.

Larry Kramer, president of the William and Flora Hewlett Foundation, which contributed to the $200 million fund, told Reuters the money will “help catalyze climate action” and that reducing methane is the quickest way to help carry out the 1.5-degree goal.

Durwood Zaelke, president of the Washington-based Institute for Governance and Sustainable Development, said the partnership was a “great start” for focusing the world’s attention on the need to slash methane.

“There’s one move left to keep the planet from catastrophe — cutting methane as fast as we can from all sources,” he said by email ahead of the announcement.