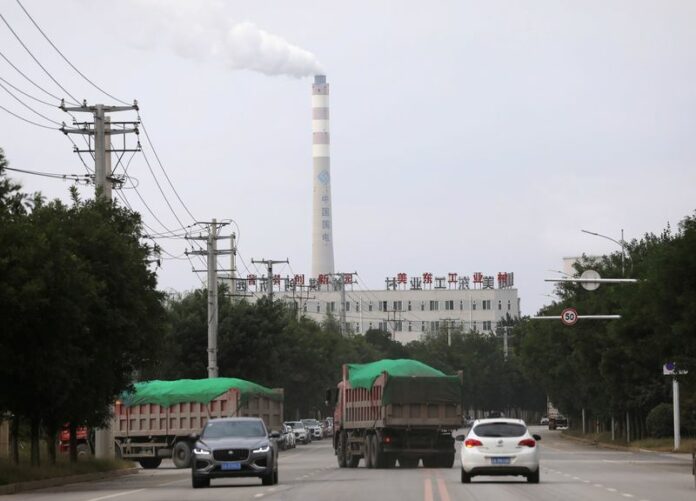 By Muyu Xu and Shivani Singh

BEIJING (Reuters) – China said on Tuesday it will allow coal-fired power plants to charge some customers market-driven prices for electricity, as a worsening energy crisis persuaded authorities to rush through their boldest reform of the power sector in decades.

Responding to shortfalls in power generation brought on by shortages and record high prices for coal, the government has taken a range of steps to boost coal production and manage electricity demand at industrial plants.

To help power companies pass on the high costs of coal, the National Development and Reform Commission (NDRC) said that all electricity generated by coal-fired plants would be priced via market trading “in an orderly manner” from Oct. 15.

It also instructed commercial and industrial users to buy direct from the market or via agents over the grid “as soon as possible”.

A worsening power crunch has forced production curbs across industries such as cement, steel and aluminium, dampening the outlook for China’s economy.

Utilities have struggled to keep up with post-pandemic demand for electricity, and power plants generated less as rising price of coal rendered operations uneconomic.

Pushing all industrial and commercial users to the power exchanges and allowing prices to be set by the market is expected to encourage loss-making generators to increase output.

Addressing a press briefing, NDRC official Peng Shaozong said the reform was “designed to reflect power demand and consumption, and to some extent to ease operation difficulties of power firms and encourage plants to increase power supply.”

“The relaxation of thermal power pricing is a positive for growth by reducing power outages,” Frederic Neumann, co-head of Asian Economic Research at HSBC told Reuters.

“However, this comes with a further rise in price pressures, as power companies can now pass on higher input costs to their commercial and industrial customers.”

About 44% of China’s industrial and commercial firms are currently trading in power markets, buying electricity over exchanges in cities such as Beijing and Guangzhou, while other such customers buy electricity at fixed prices direct from the state-owned grid companies.

China’s State Council on Friday said it would allow coal-fired power prices to fluctuate by up to 20% from base levels, an increase on previous limits.

The NDRC said that prices for high-energy consumption firms would not be bound by the 20% upper limit, in order to persuade them to consume electricity more efficiently.

And she warned that energy-intensive sectors will face record high power prices. Industries that consume the most electricity include aluminium, steel, ferro-alloys, paper making, cement and textiles.

The NDRC said residential and agricultural users, as well as public welfare initiatives, would continue to be charged fixed prices, which are often set too low to cover utilities’ costs.

Local governments were encouraged to help small- and medium-sized and individual business users cover the increased cost of electricity.

While the reforms could push up the producer price index (PPI), Peng said, it would help ensure electricity supplies and stabilise production at industrial firms.

He said the reform would not have an impact on consumer prices. But analysts and economists warned there were inflationary risks for the world’s second largest economy.

Analysts and traders have been forecasting a 12% cut in industrial power consumption in the fourth quarter due to shortages of coal over the winter.

Despite local governments in Shanxi and Inner Mongolia ordering some 200 mines to boost output, incessant rain flooded 60 mines in Shanxi. As of Tuesday, four mines with a combined annual output capacity of 4.8 million tonnes remained shut, a Shanxi official told a press conference.