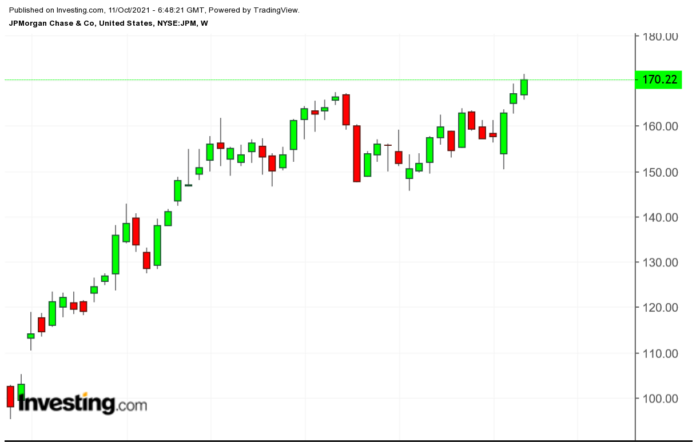 Third-quarter earnings season is kicking off this week and results from top US banks may show that rising interest rates and robust economic growth is continuing to help their bottom-line profitability.

These factors have been behind a strong rally in the sector this year. The benchmark KBW Bank Index has gained about 40% year to date, delivering more than double the gains delivered by the S&P 500 during the same period.

This remarkable performance, which comes after one of the deepest recessions in US history, is a testament to their resilient business models, which were developed after the 2008 financial crisis.

Going forward, banks’ earnings will benefit from higher interest rates. The Federal Reserve signaled after its September meeting that it was ready to start reversing its pandemic stimulus programs in November and could raise interest rates next year amid risks of a lengthier-than-anticipated jump in inflation.

Higher interest rates bode well for banks as they are able to charge wider margins on their lending products, such as credit cards, line of credits, and credit cards.

“It’s hard to be too negative on the banks given a generally favorable macroeconomic outlook among most and the prospect for higher rates and faster loan growth,” Deutsche Bank analyst Matt O’Connor wrote in a Sept. 30 note to clients.

Credit Demand Is Picking Up

Combined with the government’s massive infrastructure spending, and a gradual tapering of monetary stimulus, banks could see demand for credit pick up substantially next year as companies and individuals use up the liquidity accumulated during the pandemic.

Loans will swell by about 1% at big banks in the third quarter compared to the second, according to Goldman Sachs analysts led by Richard Ramsden. While modest, that points to better loan growth next year for large banks of about 4%, Ramsden said last week in a research note.

Morgan Stanley in its note to clients said last week:

“Demand is finally starting to pick up, as seen in the most recent Fed Senior Loan Officer Survey, which showed increasing demand and easing standards across all lending categories.”

The shares of JP Morgan, Goldman Sachs and Bank of America, our three favorite picks from this sector, have all delivered double-digit gains, thanks to their strong investment banking and trading divisions. JPMorgan (NYSE:JPM), America’s biggest bank, sees third-quarter trading and investment-banking results to be better than the firm’s earlier forecast. Investment-banking fees will increase from a year earlier, boosted by continued momentum in mergers and acquisitions, after the firm’s bankers posted their best three months ever in the second quarter. So this year is on track to become the most-active year for global M&A, according to data compiled by Bloomberg.

The New York City-based global financial services company will report its Q3 earnings on Wednesday, Oct. 13, before the market open. Analysts are expecting $3.06 a share profit on sales of $30.46 billion. JPM shares have surged 34% this year, including 11% since the Fed’s Sept. 22 policy meeting. Trading in asset markets was one of the major factors that helped banks recover quickly from their pandemic slump.

Trading revenue for Goldman Sachs (NYSE:GS) reached a 10-year high in the first quarter. The lender, which reports on Oct. 15, is expected to post $10.11 a share profit on sales of $11.72 billion.

GS stock has climbed 49% so far this year, making it the group’s second-best performer. Analysts have steadily raised their price targets amid the rally and see an additional 8.1% in upside over the next year.

Bank stocks, even after their powerful run in 2021, continue to look attractive with many macro trends remaining favorable for their businesses in the post-pandemic economic recovery. JPM, Goldman Sachs, and Bank of America (NYSE:BAC) remain our favorite financial sector picks due to their diversified portfolios and stronger balance sheets. In our view, any post-earnings weakness in these stocks should be considered a buying opportunity.