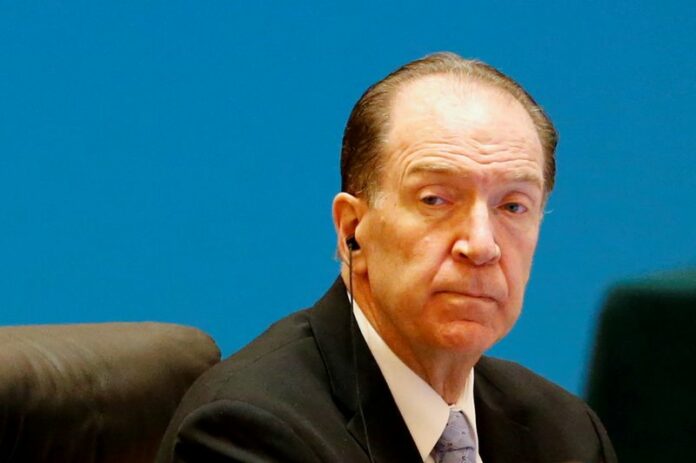 WASHINGTON (Reuters) – The World Bank is taking steps to rebuild the credibility of its research after a data-rigging scandal forced it to cancel its flagship “Doing Business” report on country business climates, bank President David Malpass said on Monday.

Speaking to reporters ahead of the World Bank and International Monetary Fund annual meetings this week, Malpass said strong research products remain a high priority for the bank and it would work on new ways to help countries improve their business climates.

Asked how the bank would rebuild its credibility after the scandal, Malpass the bank had taken “several steps” to improve research integrity, including elevating chief economist Carmen Reinhart to a role in senior management.

Malpass declined to answer questions on the IMF executive board’s review of a World Bank external investigation report alleging that IMF Managing Director Kristalina Georgieva pressured World Bank staff to alter data to favor China in the Doing Business report in 2017, when she was the bank’s CEO.

The IMF board was to deliberate again on Monday over whether she should continue as the IMF’s leader.

The same investigation report by law firm WilmerHale found that World Bank staff altered data to boost Saudi Arabia’s “Doing Business” ranking in October 2019 – six months after Malpass took over the bank’s top job – but it did not find evidence of involvement by the bank’s Office of the President or board members.

Malpass did not detail other steps that the bank was taking to shore up its research function, but said that Reinhart would be a senior president and among the top 10 executives of the World Bank Group that guide policy and decision-making at the Multilateral Development lender.

“I want really to reinforce the importance of top-quality research and the bank’s ability to produce that research in high volumes,” Malpass said.

“Doing Business,” which ranked country business climates on measurements such as ease of navigating regulations, financing availability and legal frameworks, was the bank’s most popular publication, current and former bank officials say.

Launched in 2003, “Doing Business” was widely used by private fund managers to assess country risks and guide investment decisions, but countries routinely sought to persuade researchers why they deserved a higher ranking.

Malpass said that helping countries improve their business climates is “vital to development” and a priority for the World Bank, so it will work on new ways to help countries expand their private sectors and foster good business practices. However, he did not provide any details on what those plans may include.