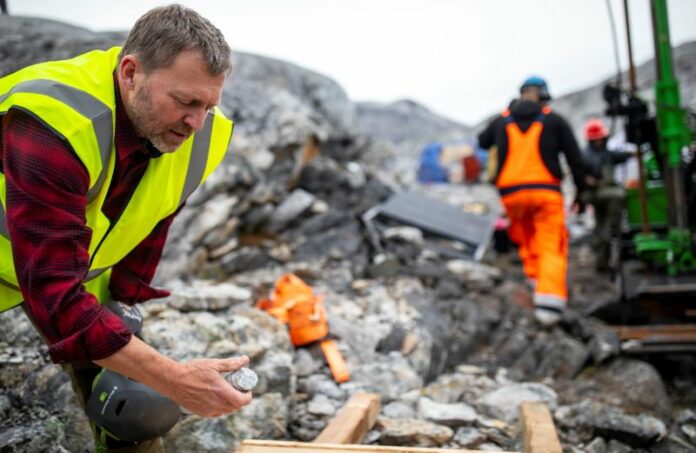 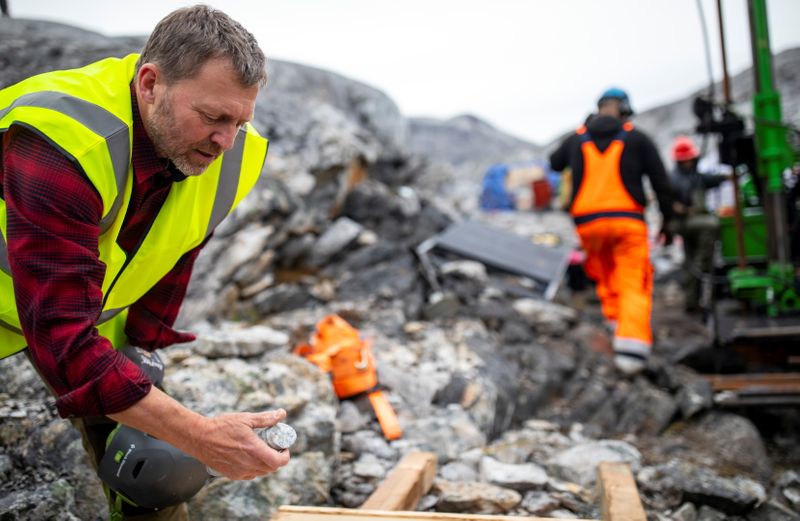 QEQERTARSUATSIAAT FJORD, Greenland (Reuters) – Among the glaciers and turquoise fjords of southwestern Greenland, a mining company is betting rock similar to the one the Apollo missions brought back from the moon can address some of Planet Earth’s climate change problems.

“This rock was created in the early days in the formation of our planet,” says geologist Anders Norby-Lie, who began exploring anorthosite at the remote mountain landscape in Greenland nine years ago.

More recently, it has excited mining companies and investors hoping to sell it as a relatively sustainable source of aluminium as well as an ingredient to make fibreglass.

The government elected in April has placed it at the centre of its efforts to promote Greenland as environmentally responsible and even the U.S. space agency NASA has taken note.

The mineral-rich island has become a hot prospect for miners seeking anything from copper and titanium to platinum and rare earth minerals, which are needed for electric vehicle motors.

That could appear an easy solution to Greenland’s challenge of how to grow its tiny economy so it can realise its long-term goal of independence from Denmark, but the government campaigned on an environmental platform and needs to honour that.

“Not all money is worth earning,” Greenland’s mineral resources minister Naaja Nathanielsen told Reuters in an interview in the capital Nuuk. “We have a greener profile, and we’ve been willing to make some decisions on it pretty quickly.”

Already the government has banned future oil and gas https://www.reuters.com/business/energy/greenland-puts-an-end-unsuccessful-oil-adventure-2021-07-16 exploration and wants to reinstate a ban on uranium mining.

That would halt development of one of the world’s biggest rare earth deposits https://www.reuters.com/business/environment/greenland-prepares-legislation-halt-large-rare-earth-mine-2021-09-17, named Kuannersuit in Greenlandic and Kvanefjeld in Danish because the deposit also contains uranium.

Kuannersuit, whose operator was in the final stages of securing a permit to mine, was a flashpoint issue in April’s election https://www.reuters.com/business/sustainable-business/mining-magnets-arctic-island-finds-green-power-can-be-curse-2021-03-02 because locals fear the uranium it contains could harm the country’s fragile environment.

“As far as we are concerned, uranium is a political issue which is being driven by exaggerated and misleading claims,” licence holder Greenland Minerals CEO John Mair told Reuters.

The mine could bring in royalties of around 1.5 billion Danish crowns ($233 million) each year, the government has said.

By contrast, revenue from two small mines operating in the country is negligible, and Nathanielsen says the government’s budget plans do not assume any mining revenue.

Some see little point in mineral exploitation until Greenland has achieved independence.

A Danish colony until 1953, the semi-autonomous territory of the Kingdom of Denmark has the right to declare independence through a simple vote, but that is likely to be a distant prospect.

Greenland has commissioned work to draft a constitution for a future independent Greenland.

Meanwhile, Greenland’s 57,000 people rely on fishing and grants from Denmark.

The grants would be reduced in proportion to future earnings from mining, prompting some to say the minerals should be left in the ground for now.

“Under the current agreement, large-scale mineral extraction makes no sense,” Pele Broberg, minister for business and trade, told Reuters. “Why should we do that while we’re subject to another country?”

Others are concerned the government is deterring investment in large-scale mining of more conventional minerals, which they say is the way to diversify the economy and make it capable of standing alone.

Jess Berthelsen, head of Greenland’s labour union SIK, had hoped the planned mine at Kuannersuit and other large-scale projects would create jobs and said the Danish grants held Greenland back.

“Sometimes I wish Denmark would stop sending money, because then people in this country would start waking up. It’s lulling us to sleep,” he said.

Business lobbyists meanwhile worry about government’s plan to reinstate a uranium ban – only eight years after it was lifted.

“The companies are used to being under pressure from authorities, but they are not used to this kind of instability,” Christian Keldsen, head of Greenland Business Association, said.

Those living nearest to the standout mineral in the government plans for sustainable mining tend to support the pursuit of new income.

“We have to find other ways to make money. We can’t just live off fishing,” said Johannes Hansen, a local fireman and carpenter living in Qeqertarsuatsiaat. The town of around 160 people is about 50 minutes by boat from the planned anorthosite mine.

Greenland Anorthosite Mining, which is developing the mine, has a plan to ship 120 tonnes of crushed anorthosite to potential customers in the fibreglass industry where it says it has value as a more environmental alternative to kaolin.

The company, which hopes to have an exploration permit by the end of 2022, says anorthosite melts at a lower temperature than kaolin, has a lower heavy metal content and produces less waste and greenhouse gas emissions.

The bigger aim is for anorthosite to be used as an alternative to bauxite to produce aluminium, one of the minerals seen as central to reducing emissions because it can be used to make vehicles lighter and is fully recyclable.

Greenland Anorthosite Mining says aluminium can be produced more easily than when bauxite ore, the primary source of aluminium, is used, and again produces less waste compared with existing processes.

Anorthosite also fits in with European Union ambitions to diversify mineral sources. It is found in Canada and Norway, as well as Greenland, while bauxite is concentrated in a belt around the Equator.

Asuncion Aranda, who is heading an EU-funded research project into anorthosite, said the technology had been seen to work although research is needed to cut costs and minimise the environmental impact.

“We don’t know yet if our process will be competitive from the start compared with the established production method,” she said.

“If all goes well and the aluminium industry is in, then we could see the first commercial production in eight to ten years.”

While the EU is focused on earthly uses and curbing emissions, NASA has ambitions to find new environments for human activity.

It has been using crushed anorthosite powder from a smaller Greenland mine already in production, operated by Canadian-based Hudson (NYSE:HUD) Resources, to test equipment as part of a space race that would involve mining on the moon and even establishing communities there.

“The deposits in Greenland and elsewhere are not exactly like the moon, but they’re pretty darn close,” said John Gruener, a space scientist at NASA’s Johnson Space Centre.

“If we’re really going to live off the land at the south pole of the moon, which everybody is interested in now, we will have to learn how to deal with anorthosite, the dominant rock that’s there,” he said. “Having another supply of anorthosite from Greenland is great.”

Climate campaigners are not so sure.

Greenpeace has campaigned against deep sea mineral extraction, saying it risks disturbing ecosystems we have not even begun to understand and puts forward similar arguments against mining in space.

“We need to be finding sustainable solutions, not looking for more sources in new frontiers. There is so much we just don’t know about these environments,” said Kevin Brigden, senior scientist at Greenpeace Research Laboratory (NYSE:LH).

Asked about the concerns, Greenland’s resource ministry said in an emailed statement it did not expect minerals extracted in Greenland to be used only for green technology.

“But we work actively to optimise the green profile and utilise our resources in the service of the good cause,” it said.

Share
Facebook
Twitter
Pinterest
WhatsApp
Previous articleU.S. Consumers Will Pay More for Energy This Winter, EIA Says
Next articleNeed to Know: After a 71% profit, this investor just got out of oil and is putting everything into this commodity instead