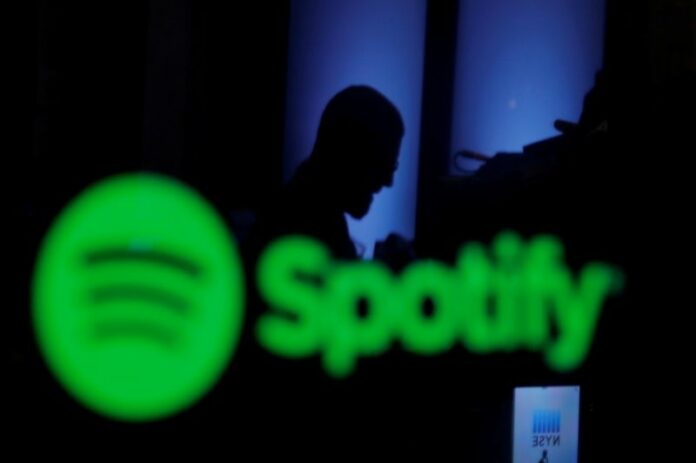 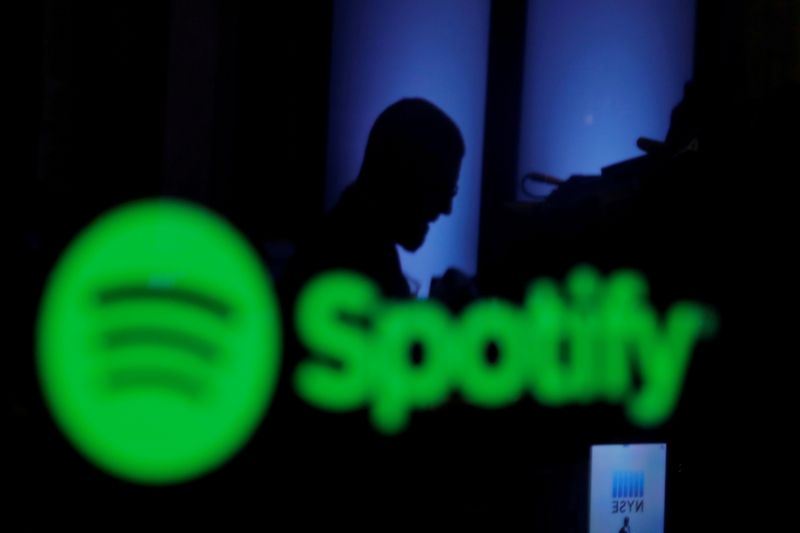 © Reuters. FILE PHOTO: A trader is reflected in a computer screen displaying the Spotify brand before the company begins selling as a direct listing on the floor of the New York Stock Exchange in New York, U.S., April 3, 2018. REUTERS/Lucas Jackson

By Nqobile Dludla and Supantha Mukherjee

JOHANNESBURG/STOCKHOLM (Reuters) – Africa, with its internationally recognised musical talent – and growing mobile phone use – is central to Swedish music streamer Spotify (NYSE:SPOT)’s plans to extend its reach to a billion customers.

As African artists such as Nigeria’s Burna Boy and South Africa’s Black Coffee are streamed across the world, the continent was seen as an obvious choice and is the home to more than a third of the company’s 85 new markets.

The problem is payment on a continent where many people are more likely to have a mobile phone than a bank account.

That means Spotify’s first task as it implements a plan announced in February to almost double its footprint is to win over the telecom companies that often equate to banks.

Owned by Kenya’s biggest telecoms operator, Safaricom, M-Pesa is used to send money, save, borrow and make payments for goods and services.

“A lot of African countries are unbanked so that means they don’t use credit cards and this is very true for a lot of east African (countries) and in Kenya you use M-Pesa for the most part,” Okumu said. Elsewhere in Africa, Spotify is seeking other collaborators.

“We are having conversations with the right partners to ensure that we are providing solutions to payment problems that several African consumers face in different parts of the continent,” Okumu said.

Irene Kophen, a Spotify premium user based in Kenya, said she prefers M-Pesa rather than bank cards because she thinks mobile money has made music more accessible.

“Most of us have access to our phones, but not many of us have cards, or bank accounts,” the 31-year-old told Reuters.

Costs associated with opening bank accounts, the distance to financial institutions and the difficulty in meeting “Know Your Customers” requirements because of inadequate proof of address have added to the appeal of using phones to pay.

“The past few years have seen an emphasis on shifting towards expansion of innovative banking services through mobile technology to capture lower income segments and the unbanked,” a spokesperson for South Africa’s Absa bank said in an emailed statement.

By 2020, sub-Saharan Africa had 548 million mobile money accounts, up 12% from 2019 – more than any other region in the world, mobile industry body GSMA said.

That has provided banking access in a continent where about 43% of sub-Saharan Africans over the age of 15 had a bank account in 2017, according to the World Bank, which has not provided any more recent data.

Spotify’s local rivals, such as Kenya-based and Danish-listed Mdundo and Nigeria headquartered Boomplay have also started to build ties with mobile operators.

Such partnerships are based on telcom providers selling music bundles that give customers access to a streaming company’s premium service and exclusively-curated music mixes.

The collaboration can benefit both sides by boosting revenue and helping to increase subscribers, but for the streaming companies it is all-but essential.

“It is critical that streaming companies get this right, otherwise they will lose out on revenue from consumers who were willing, but unable, to pay them,” Charles Stuart, PwC partner and director of Technology, Media and Telecommunications, said.

For the telecom companies, which also include Airtel Nigeria and Vodacom Tanzania, the partnership can help to achieve customer “loyalty and stickiness” by adding value, Stuart said.

Boomplay, which has 60 million monthly active users, has allowed users to pay via mobile platforms such as M-Pesa and Tigo-Pesa in Kenya and Tanzania.

It aims to roll out that option in Francophone countries, Tosin Sorinola, Boomplay’s director of artiste and media relations, told Reuters.

Mdundo, which had 8.7 million monthly active users as of June, has three telecom partnerships in Nigeria and Tanzania, and expects one or two more similar deals before the end of this year, Chief Executive Officer Martin Nielsen told Reuters. “When it comes to payments across Africa our key focus is bundling with telcos… because telcos are the ones who have this reach and access to people’s pockets,” he said.