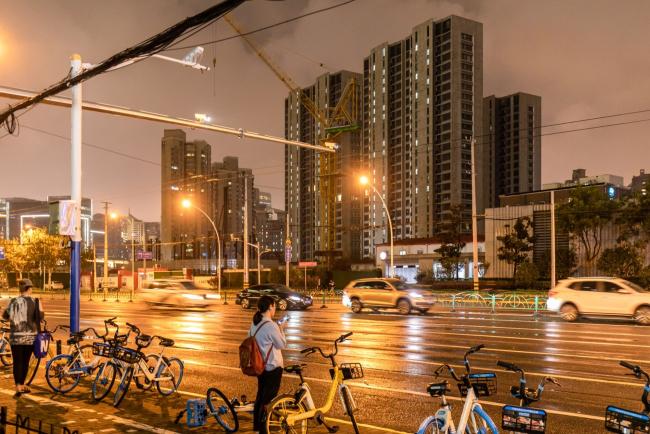 © Bloomberg. Traffic moves along a street near an residential area in Shanghai, China, on Wednesday, Sept. 29, 2021. The National Development and Reform Commission will let power prices reasonably reflect changes in demand, supply and costs, it said in a statement on measures to ensure power supply through winter and spring seasons. Photographer: Qilai Shen/Bloomberg

Home sales by value tumbled 16.9% in September from a year earlier, following a 19.7% drop in August, according to Bloomberg calculations based on National Bureau of Statistics data released Monday.

The property slowdown is one of many headwinds facing the Chinese economy, which saw growth slow last quarter, separate figures showed. Government efforts to curtail developers’ leverage has exacerbated a cash crunch at Evergrande that’s now spreading to other firms, prompting buyers to think twice about putting down deposits for homes that are yet to be built.

The sales slump may fuel a vicious cycle by worsening the cash shortage at developers and forcing them to offer bigger discounts. That in turn could reduce home prices in a country where people keep a large chunk of their wealth in real estate.

China’s central bank broke its silence on the Evergrande crisis last week, saying risks to the financial system stemming from the developer’s struggles are “controllable” and unlikely to spread. At a virtual meeting of the Group of 30 on Sunday, People’s Bank of China Governor Yi Gang said Evergrande’s liabilities were spread across “hundreds” of entities in the financial system so that there is “not much concentration.”

China’s government has been trying to rid the property sector of excess debt, based on the notion that homes are for living in rather than speculation. Yet carrying out that task is a delicate exercise in a country where the broader property sector makes up about 23% of gross domestic product, according to estimates by Goldman Sachs Group Inc (NYSE:GS).

Regulators have begun easing restrictions on home loans, a move that could help first-time buyers and boost transactions following an unprecedented cap on banks’ exposure to the real estate sector. Officials told some major banks last month to accelerate approval of mortgages in the fourth quarter, Bloomberg reported last week.

China’s developers have faced a wave of credit rating downgrades and now account for about half of the world’s distressed debt, according to data compiled by Bloomberg. Contagion fears intensified over the past two weeks after a surprise default by Fantasia Holdings Group Co. and a warning from Sinic Holdings Group Co. that its default was imminent.