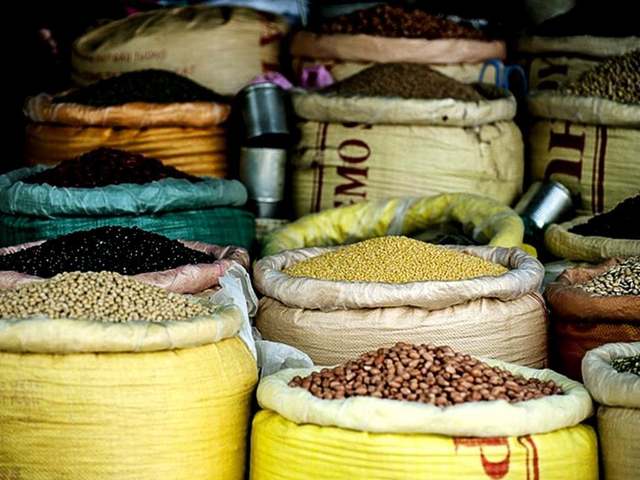 PESHAWAR: Prices of essential food commodities have increased manifold as impacts of the rising petroleum commodities bacame visible in local retails and wholesale markets. According to a survey conducted by Business Recorder here in the local market on Sunday, an upward trend in prices of live chicken meat, flour, sugar, cooking oil/ghee, vegetables, fruits and pulses and other essentials was witnessed.

The survey noted that prices remained on high side in the retail market as one-kilogramme of live chicken/ meat was being sold at Rs241. Similarly, the survey added farm eggs are available within a range of Rs180-200 per dozen. Beef is being sold at Rs550-600 against the official fixed rates of Rs400 per kilogramme, while mutton was available within range of Rs1300-1400/- per kilogramme in the local market.

Fresh milk is being sold at Rs150-160 per litre while yogurt was being available at Rs120-140 per kilogramme, the survey noted. Traders and shopkeepers have attributed the increasing prices owing to continuous surge in rates of petroleum commodities and feared the prices of food items would further increase in coming days.

The survey noted that flour prices have risen in the retail and wholesale markets in Peshawar as bread-makers (nanbais) have also increased price of roti (naan) at Rs15-20 against the official price of Rs10. The price of an 80-kg flour bag has reached at Rs6000, while black marketing was also in full swing. An 85-kg bag is being sold from Rs6800-7000/- because of unavailability of 85-kg flour bag in the open market, according to the survey.

Likewise, the survey added the price of a 20-kg flour bag has also increased to Rs1350-1380 and Rs1400, which was being sold at Rs1100-1150 and Rs1250 a few days back. Sugar prices have touched a new peak in the wholesale and local market as five kilogramme sugar is being sold at Rs560 in the open market or Rs112-115 per kilogramme, according to the survey.