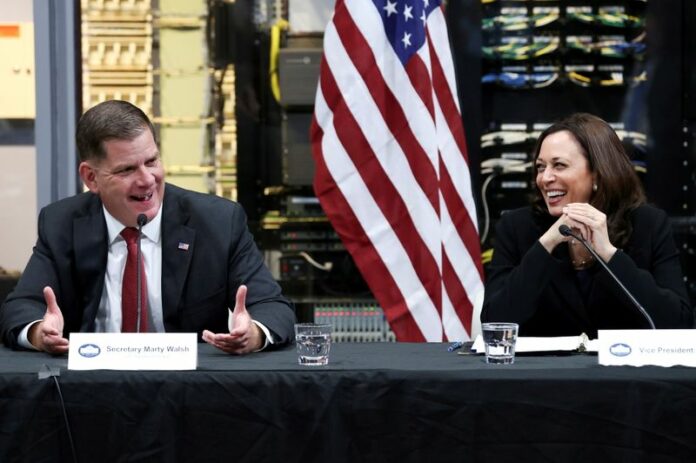 The moves will include directing federal agencies to inform job applicants and new employees about unions during the hiring and onboarding process. Unions will also be allowed to participate in new employee training sessions.

Federal agencies will be required to enhance their communications to current employees and inform them about their right to join a union and the ways they can engage with their union.

Harris and Walsh, who are spearheading a White House labor task force established by Democratic President Joe Biden earlier this year, will unveil the effort during a roundtable session with workers, a White House official said on condition of anonymity.

The labor movement traditionally has been a key pillar of the Democratic Party’s coalition and a major player on the U.S. political stage, but its pull has waned in recent decades.

The percentage of U.S. workers represented by a union fell almost 15 percentage points between 1979 and 2020, according to the White House. That drop, the White House says, has cost workers $200 billion a year in unrealized wages and benefits.

The new measures will affect 2.1 million non-postal federal employees and be overseen by the Office of Personnel Management (OPM), an independent federal agency.

The White House labor task force is expected to submit a report to Biden on Saturday.