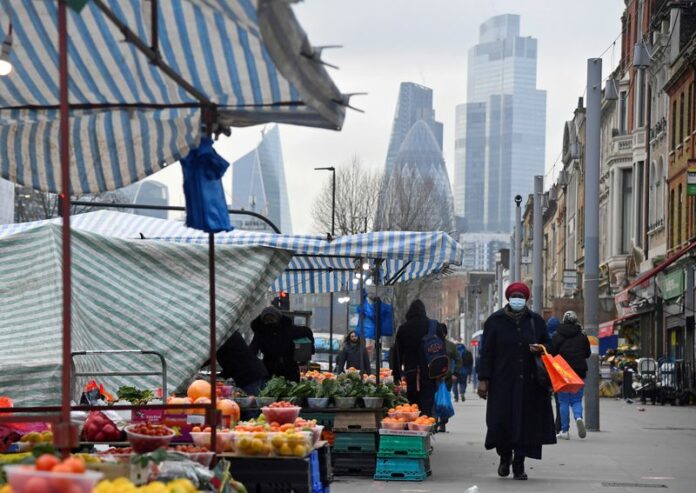 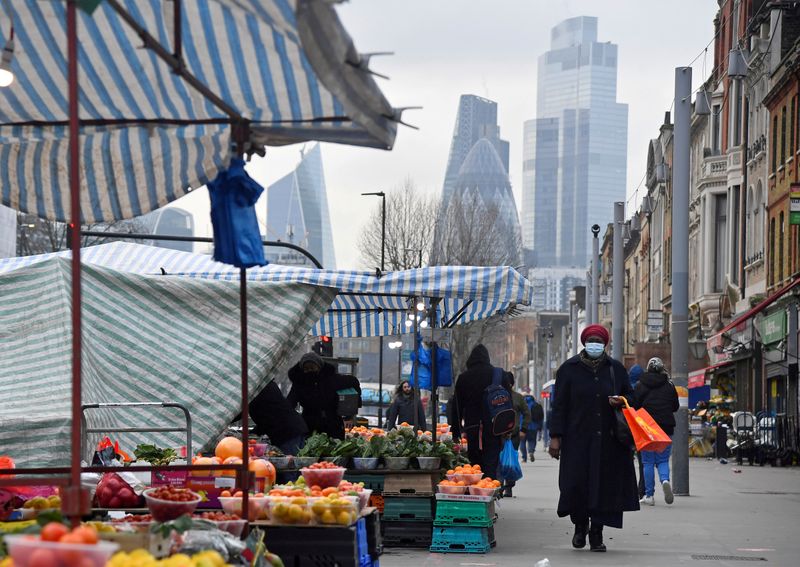 © Reuters. People shop at market stalls, with skyscrapers of the CIty of London financial district seen behind, amid the coronavirus disease (COVID-19) pandemic, in London, Britain, January 15, 2021. REUTERS/Toby Melville/Files

LONDON (Reuters) -A record proportion of the British public thinks inflation will accelerate over the next 12 months, according to data that could further boost expectations that the Bank of England will raise interest rates next month.

Some 48% of people surveyed this month by consumer research firm GfK expected prices to increase more rapidly over the next 12 months, up from 34% in September, the figures seen exclusively by Reuters showed.

It marked the highest share since records began in January 1985, when Margaret Thatcher was prime minister and more than a decade before the BoE became operationally independent.

The surge in inflation expectations follows a month of rocketing gas prices that have caused the collapse of several British energy suppliers, leaving households faced with the prospect of hefty bills in 2022.

The BoE’s new chief economist, Huw Pill, said inflation in Britain could surpass a “very uncomfortable” 5% and the question of whether to raise interest rates was a “live” one at its Nov. 4 meeting, the Financial Times reported.

“More and more shoppers expect that costs for goods and services will jump dramatically in the next 12 months,” said Joe Staton, client strategy director at GfK.

“This rapid increase will impact our ability to shop and save, and our willingness to spend at a time when our incomes are outpaced by inflation.”

The public are generally poor predictors of inflation but central banks watch their expectations for signs that consumers are losing confidence in authorities’ ability to keep price rises in check.

A similar surge in public inflation expectations in the euro zone in 2011 helped to persuade the European Central Bank to raise interest rates twice that year – although it quickly reversed course.

Economists say those rate hikes were a mistake and some think the BoE is at risk of doing the same amid signs of a slowing economic recovery. Retail sales fell unexpectedly in September for a fifth month running, data showed on Friday.

While the GfK’s gauge of inflation expectations covers the only the next 12 months, the scale of the move is likely to catch the eye of members of the BoE’s Monetary Policy Committee.

The data are collected as part of GfK’s monthly Consumer Confidence Index, which dates back to the early 1970s. The overall confidence index fell in October to an eight-month low.

“Consumers are already nervous about the state of their personal finances. The spectre of rising costs can only add to that growing concern,” Staton said.

Before Brexit, GfK’s price expectation figures were freely available as part of the European Commission’s monthly consumer surveys of EU countries, but have not been publicly available since the start of the year.