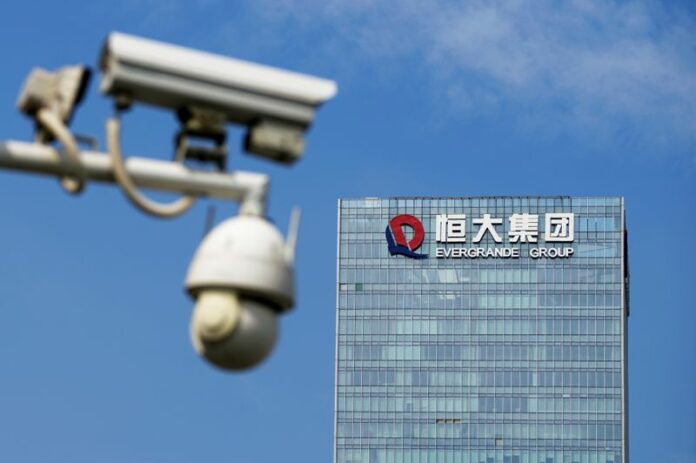 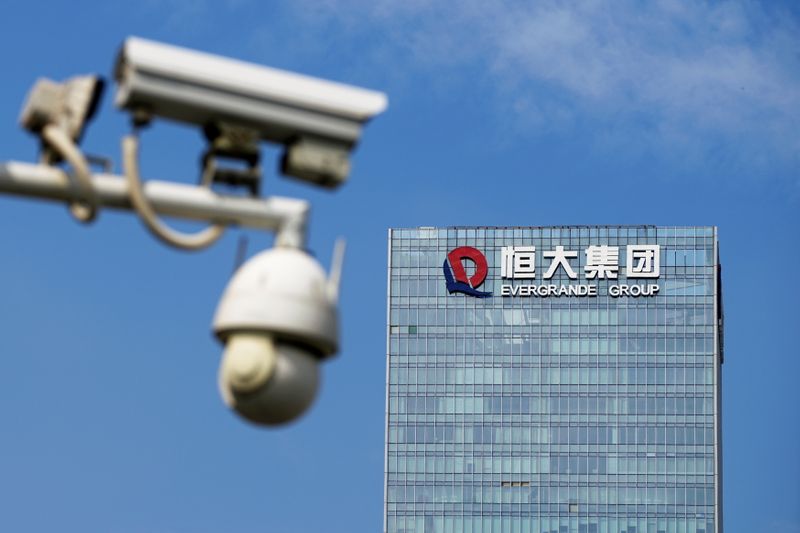 HONG KONG (Reuters) -China Evergrande Group has supplied funds to pay interest on a U.S. dollar bond, a person with direct knowledge of the matter told Reuters on Friday, days before a deadline that would have seen the developer plunge into formal default.

Shares of Evergrande, which is saddled with more than $300 billion in liabilities, rose as much as 8% early on Friday, and were still up more than 4% at noon.

Here is what people are saying about the world’s most indebted developer, whose fate could ripple through global markets.

“Evergrande making its interest payment is a positive surprise. Importantly other developers also confirmed making interest payments – for a market which has fully capitulated, the fact the world did not end overnight could itself be a positive catalyst.

“The main takeaway for Evergrande’s creditors is that they are all being treated the same; everyone is being kept current as the company has avoided a formal default for the time being.

“Multiple financing channels are effectively closed to developers in response to the policies implemented by the government. For those channels to reopen, investors have to believe these companies can remain going concerns. This means they need to have sufficient access to their own cash flows and to refinancing options to address their debt as it becomes due.”

“Even though Evergrande has paid the coupon for the U.S. denominate bond, well never say never, maybe on the next one they will default. There is still a very high default risk for the U.S. bonds, in the next couple of months.

“Chinese policy will not allow property developers to dump their properties at low prices and not allow an overheating or bubble in the market as well. In the longer term, I don’t see much upside for the sector and investors are better off avoiding the developers that have already hit the three red lines.”

“China, in the bigger picture, although they don’t want to be seen to bail out Evergrande for a whole bunch of reasons … like HNA they’ll be looking to do an orderly wind down. We’ve got the central committee meeting in early November, and the last thing they’d want is a disorderly collapse of Evergrande ahead of that meeting, especially when President Xi is talking about shared prosperity, Evergrande does employ 1.5 million people directly or indirectly, so that wouldn’t be a good look on that front if it was allowed to fall into a disorderly collapse.”

“I think this will be a short-term positive, I’m just not sure how long that momentum will last, whether it carries into next week or not. There are so many different possibilities for the way that this story could evolve it’s really hard to predict what’s going to happen.

“And I think because of that it will still be a headwind for China markets because there’s just so many variables, so many ways this story could wash out… I think this will be a short-term positive but I don’t think this will change the overarching fears about what the true state of the sector or the China economy is at the moment.”

“It is a boost to investor confidence for both Evergrande and the other Chinese property USD bonds, especially in terms of willingness to pay. That said, Evergrande has more payments coming up. We wait to see if the company is able to fulfil the obligations.”

“I think investors should not be overly optimistic about this. After all, Evergrande will still have many debts to be repaid in the short term in the future, and its fundamentals such as sales situation have not seen any obvious signs of improvement for the time being. At the same time, the current price of Evergrande’s bonds still reflects the lack of confidence in the market for its future.

“Therefore, the rebound of Evergrande’s share price may be just a short-term performance, and investors should adopt a cautious attitude.”

“It is not really surprising news for us, as we can expect that from the previous moves from Evergrande, including the three-month maturity extension of its Jumbo Fortune bond and a coupon repayment on its onshore bond which was settled in cash. It is obvious that they want to avoid near-term bonds default that could allow creditors to claim against and liquidate its offshore and onshore assets.

“The company may pay the remaining coupons on the last day of each bond’s grace period. But is it good news for bondholders? At this point it is unclear, because this move further buys time for the company to sell their assets, which can eat into the recovery value of the bonds if they default eventually. Therefore, at this moment, we do not see the market reacted very positively towards this news.”

“It’s not a surprise that Evergrande has made the payment in the grace period, but it is one of many obstacles that it is facing. There are many, many liabilities that are due. The deal with Hopson to sell the property services company has fallen through, so they still have to come up with money somehow.

“If you look at the ‘three red lines’ policy released last year, there are a number of developers that fall into the red zone, and it is these developers which are seeing problems right now. I think we will see more default events coming through.”

“In the short term, we believe the interest repayment should provide a fillip to Chinese risk assets, including the yuan and Chinese equities. Evergrande default risks, though not dissipated, have likely been deferred for some time.”

“The market is in ‘wait and see’ because Evergrande still has a large pile of debt with the next batch of default dates coming up soon. Its liquidity is so bad it’s questionable whether it can repay other debts.

“Its sale of the services unit failed and its September and October sales were getting worse and worse. It has very little cash. This repayment also doesn’t lift the sentiment of the sector, because those companies in cash crunch will still be struggling. The situation doesn’t change unless PBOC loosen more credits.”

“There is still a lot of scepticism. Bond prices have not picked up a lot. It’s a situation where they’ll try to keep it going until they can’t.

“What’s important is the property market, because they have a lot of projects under construction and the worst scenario would be if they go down and projects are left unfinished and that creates spillover for the economy. They have bought themselves some time.”

“That Evergrande is able to fulfil its obligation after the grace period on the offshore bond is positive at least in the short term as it shows a certain commitment from the firm and provides a relief for offshore bond investors.

“However, they still have a bunch of deadlines coming up before the end of March. To fulfil all the obligations and the bond coupon payments they still need liquidity either from themselves or from offloading assets. Even though Evergrande managed to repay the coupon this time, it’s still quite challenging for them to meet all their future obligations.”

“I expect it means they also plan to pay the offshore bond coupons due by the 29th. There’s no point in paying this one if you fully plan on not paying the next one six days later, but given the company’s self-reported cashflow difficulties, it is not clear how long they can keep that up.

“Given that we have little clarity on how bank financing is going for stalled real estate projects, but we know that project pre-sales are down a lot, the onshore business is unlikely to be supplying cash to Evergrande near-term. And I expect Hopson’s clarified response yesterday means lawsuits if Evergrande tries to sell Evergrande Property Services to someone else.”