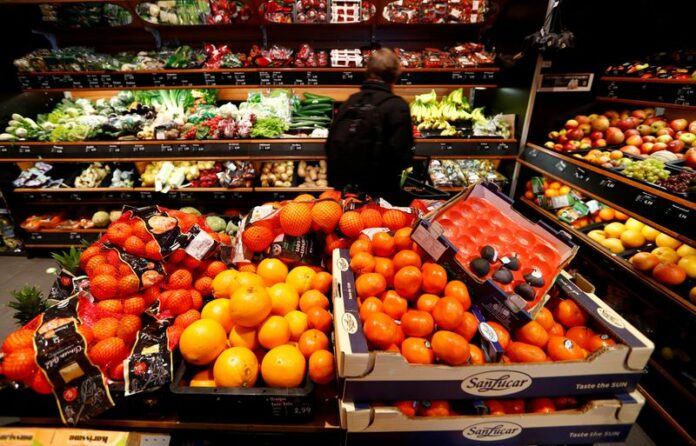 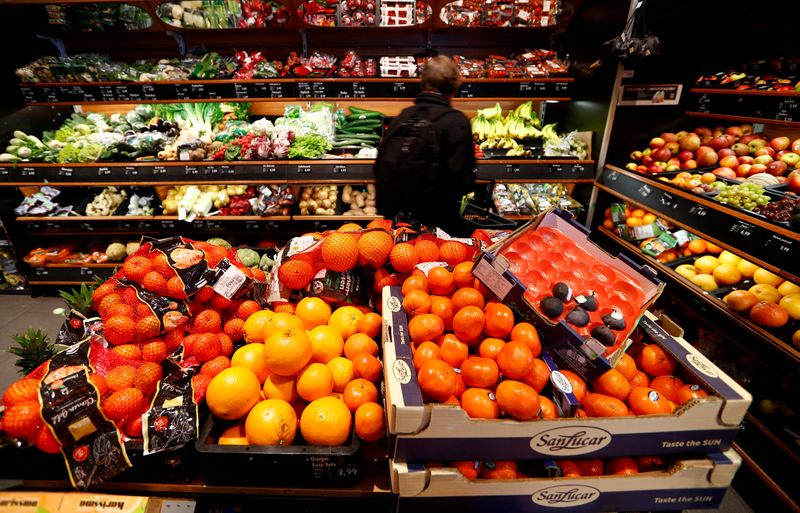 © Reuters. FILE PHOTO: Full shelves with fruits are pictured in a supermarket during the spread of the coronavirus disease (COVID-19) in Berlin, Germany, March 17, 2020. REUTERS/Fabrizio Bensch/File Photo

By Yoruk Bahceli and Abhinav Ramnarayan

LONDON (Reuters) – A key market gauge of euro zone inflation expectations rose above the ECB’s inflation target of 2% for the first time in seven years on Friday, just as the central bank weighs how to proceed with stimulus when its pandemic-era support ends.

The so-called five-year, five-year forward inflation swap jumped by as much as 10 basis points to 2.0528%, the highest since 2014.

Prices have soared this year on supply bottlenecks and spiking energy prices, with euro area inflation hitting a 13-year high in September.

Peter McCallum, rates strategist at Mizuho, said the ECB, which tracks the market inflation gauge, will probably be keen to talk down the rise at its policy meeting next Thursday.

“It’s not in their interests to have (the breakeven) too high just because of what that implies for where outright yields are and where financial conditions are.”

After undershooting its inflation target of “close to, but below 2%” for years, the ECB adopted a 2%, symmetrical inflation target in July which will allow it to tolerate temporary overshoots.

Though market pricing suggests inflation will reach target over the longer term, the ECB maintains that the current rise in inflation is transitory and projects a fall to 1.5% by 2023.

That means it wouldn’t be able to raise interest rates for years to come and policymakers have started to push back against the higher rates money markets are pricing in from next year.

Friday’s spike in breakeven rates, which measure the difference between nominal and inflation-linked real bond yields, was driven by a fall euro area real yields to a record low around -1.87%.

In Germany, real yields also fell to a record low and the breakeven rate rose to around 1.91%, the highest since 2013.

Analysts said inflation fears were pushing real yields down, as inflation-linked bonds are bought by investors to hedge the risk.

But low real yields can also imply that investors expect a grim economic growth outlook down the line.

“The main question here is why real yields are so low, particularly taking into account the solid… growth outlook we have to think about,” said Florian Spaete, senior bond strategist at Generali (MI:GASI) Investments.

Though growth is expected to be high this year, economic risks are rising and purchasing manager indices on Friday showed euro zone business activity slowed this month as firms grappled with soaring costs due to supply-chain constraints.

Later on Friday, S&P Global (NYSE:SPGI) will review Greece’s credit rating, with analysts expecting no change to the country’s BB rating, which is two notches below investment-grade.

Greece’s rating is particularly significant as without an investment-grade rating or ECB policy change it would fall out of the bank’s bond purchases once its pandemic stimulus ends next year.