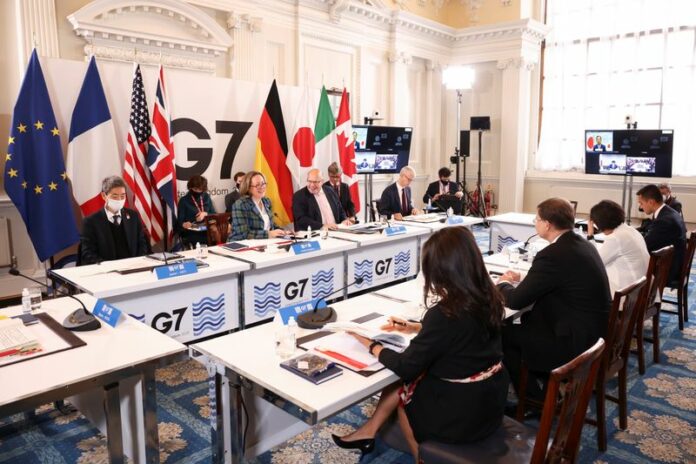 LONDON (Reuters) -The Group of Seven wealthy nations agreed on principles to govern cross-border data use and digital trade, Britain said in what was described as a breakthrough that could liberalise hundreds of billions of dollars of international commerce.

Trade ministers from the G7 reached agreement at a meeting in London on Friday.

The deal sets out a middle ground between highly regulated data protection regimes used in European countries and the more open approach of the United States.

“We oppose digital protectionism and authoritarianism and today we have adopted the G7 Digital Trade Principles that will guide the G7’s approach to digital trade,” the communique published by Britain said.

Digital trade is broadly defined as trade in goods and services that is either enabled or delivered digitally, encompassing activities from the distribution of films and TV to professional services.

For Britain alone, remotely delivered trade was worth 326 billion pounds ($448.09 billion) in 2019, or a quarter of all its trade, according to a government study of official data.

But differing rules governing the use of customer data can create significant barriers, particularly for small and medium-sized businesses for whom compliance is complicated and costly.

The deal agreed on Friday is a first step in reducing those barriers, and could lead to a common rulebook of digital trade.

“We should address unjustified obstacles to cross-border data flows, while continuing to address privacy, data protection, the protection of intellectual property rights, and security,” an annex to the document said.

A British official with knowledge of the deal said: “This agreement is a genuine breakthrough that is the result of hard diplomatic graft.

“All of us rely on digital trade every day, but for years the global rules of the game have been a wild west that have made it difficult for businesses to seize the immense opportunities on offer.”