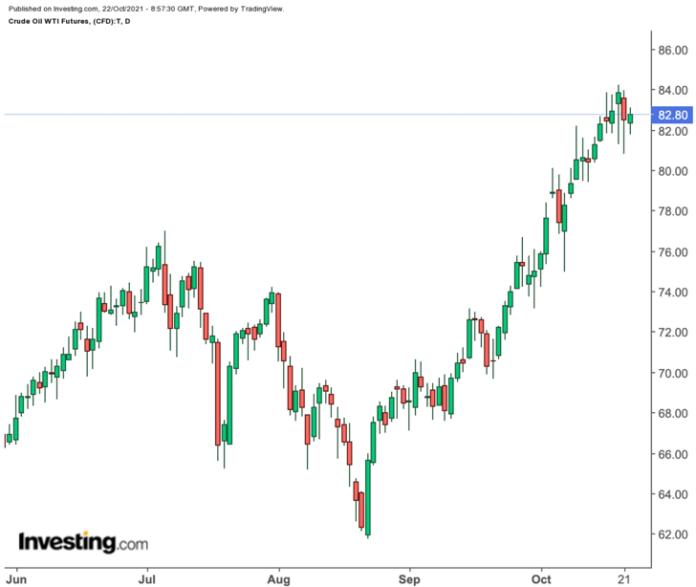 The world has a new ‘energy czar’—at least Vladimir Putin would like to think of himself as one—and he’s reaching out to both sides of the aisle: producers (Russia is big enough to sit beside the Saudis in OPEC+) and consumers (Europe can solve its gas crisis if only it listens to Moscow, he says).

The ‘fixes’ offered by the Russian president to the world’s ills have often been viewed with suspicion and perhaps for good reason.

Earlier this week, we learned Russia won’t go out of its way to offer European consumers extra gas unless it gets something in return: regulatory approval to start shipments through the controversial Nord Stream 2 pipeline. In exchange for upping supplies, Russia wants to get German and European Union approval to begin using the pipeline to Europe.

On Thursday, Putin said something else that raised a buzz in oil markets: OPEC+ was putting out more barrels than it had announced. The Organization of the Petroleum Exporting Countries and their allies decided at their Oct. 4 meeting not to add more than the 400,000 barrels per day that they had committed to over the next five months—despite a global supply squeeze that has sent crude prices to seven-year highs.

Putin, however, said OPEC+ was increasing production by “a bit more than agreed”. That was in contrast to what most in the 23-nation oil producing alliance, led by Saudi Arabia, have been saying.

The Russian leader also said something else:

“Not all countries are able to significantly raise oil production.”

He could have been referring to the struggle that some countries like Nigeria were having to meet their OPEC-granted quotas due to the costs associated with the restarting of abandoned oil fields, as well as fighting pipeline vandalism.

Data shows that OPEC+’s 19 members with production quotas shipped a combined 570,000 barrels daily below their September allocations, bringing to 111.5% their compliance to cuts.

Thus, Putin could have meant that whatever extra oil that comes out of OPEC+ in the near term will indeed be small.

On the other hand, he could be implying that Russia is one of those countries that has the capacity to—and just might—raise production significantly above most other OPEC+ nations. Russia aside, Iraq has also said that it has the capacity—and wish—to pump more.

Some may think it’s wrong to read too much into Putin’s remarks. Yet, there are valid reasons to.

In the three weeks since the OPEC+ meeting, the Kremlin’s remarks, amid the dynamics of the oil supply crisis, have prompted questions on Russia’s actual agenda as deputy head of the cartel.

On Oct. 7, just three days after the OPEC+ meeting, Russia’s Deputy Energy Minister Pavel Sorokin said Moscow did not want the oil market to overheat and was keen to see global crude prices settle into a long-term range of $45-$60 per barrel. Since he spoke, international crude benchmark Brent has traded beyond $86.

“You’re seeing a super-cycle everywhere across the board, not just in oil,” Sorokin said.

“If prices get too high, it leads to demand destruction, which is not healthy. We have not changed our view that we prefer stable prices, predictable prices, because that is the only way that the economy can plan ahead.”

Putin himself said he did not want oil prices to skyrocket, although he agrees that $100 a barrel is a possibility.

What the Russians won’t discuss is why Deputy Prime Minister Alexander Novak—who was the country’s energy minister before his elevation on the politburo and continues to perform in that role—didn’t stand his ground for more production at the October meeting of OPEC+, which he virtually co-chaired with his Saudi counterpart Abdulaziz bin Salman.

Also, if Russia didn’t want demand destruction to occur from pricey oil, and preferred a ‘stable’ market, wouldn’t it have produced much more in September as prices went from below $65 to above $80?

It’s obvious why the Russians are playing it chummy with the Saudis in their OPEC+ huddles, while making politically-correct noises about oil prices on the world front.

The OPEC+ arrangement, in place since 2015, has worked largely because of the two, who are the world’s biggest oil producers besides the United States—which has lost at least 15% of its output since the onset of the coronavirus pandemic in March 2020.

The Moscow-Riyadh cooperation has not been without its problems though as Russia has always been guilty of breaching its export quotas in the six years that the pact has been around.

But it was a major disagreement on production between the two that led to a collapse of OPEC+’s working order just before the pandemic, sparking a global supply glut that drove US crude prices into negative territory the first time ever. Following an unlikely mediation by former US President Donald Trump, the two got back together. Neither side wants a repeat of that disaster, thus the importance of projecting a united front to the market each time they meet.

So, when you hear next of Putin talking about high oil prices or the need to have more barrels on the market, let it go in one ear and out the other. This is especially true for struggling consumer countries such as India, the third largest oil importer after the US and China.

The Russian president appears to want to conjure up the image of a global energy czar who can resolve the woes of both producers and consumers. The reality though is Europe remains opposed to his Nord Stream 2, and Saudi Energy Minister Abdulaziz, who loves quoting Hollywood tough cop Dirty Harry, hates losing to anyone.

This means Russia will be making the kind of noises that excite the market before each OPEC+ meeting. But also expect little, or nothing, good to come out of it for consumers.

“At heart, the Russians are production hawks who don’t mind $60 or even $50 crude, so long as they can export enough to make up the revenue they want,” said John Kilduff, founding partner at New York energy hedge fund Again Capital.

“But the Saudis hate that idea,” he added.

“So, we’ll continue hearing of pre-meeting tensions before each OPEC+ sit down. And the price of crude will probably come down $2 a barrel each time on all that talk about Russia’s resistance to the Saudi plan. Then another pact will be announced and the price will go up another $20.”