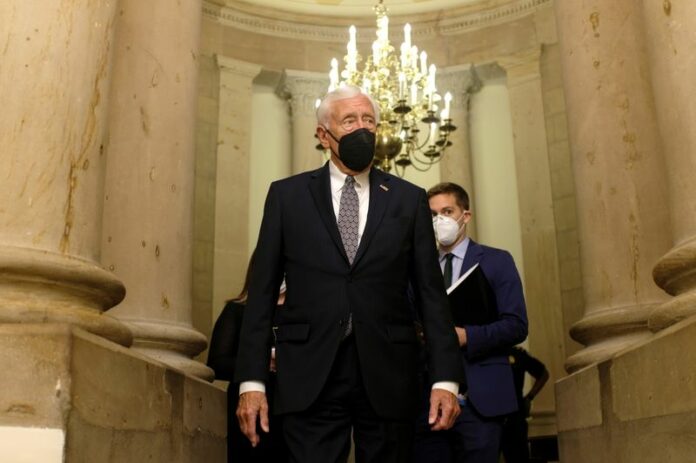 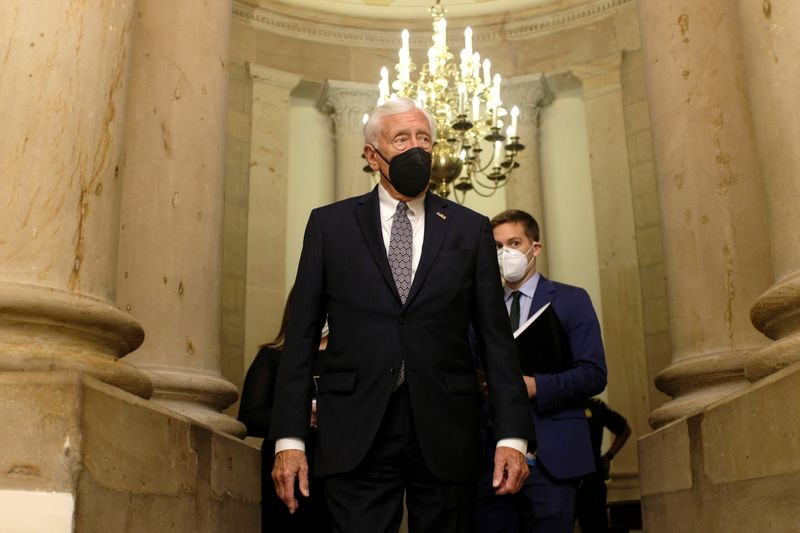 By David Morgan and Jarrett Renshaw

WASHINGTON (Reuters) -Democrats are closing in on a deal on President Joe Biden’s social and climate-change agenda by narrowing their differences over healthcare and other issues, U.S. House of Representatives Speaker Nancy Pelosi said after a White House meeting on Friday.

“We had a very positive meeting this morning. I’m very optimistic,” Pelosi told reporters on her return to the Capitol.

Democrats in the House, Senate and White House hope an agreement on a framework of $2 trillion or less will allow the House to move forward next week on a $1 trillion bipartisan infrastructure bill and set the stage for passage of Biden’s larger “Build Back Better” social package.

Pelosi said there were only a few outstanding issues on the legislation’s healthcare provisions and that decisions also remained on which revenue provisions to include.

“There are many decisions that have to be made, but more than 90% of everything is agreed to and written,” Pelosi said. “We’re narrowing the differences.”

Senate Finance Committee Chairman Ron Wyden, meanwhile, floated a “billionaires income tax” proposal that congressional sources said would apply to around 700 taxpayers and would raise hundreds of billions of dollars in fresh revenues to help offset the cost of the Biden plan.

“The Billionaires Income Tax is about fairness and showing the American people taxes aren’t mandatory for them and optional for the wealthiest people in the country,” Wyden said in a statement.

A source familiar with the White House’s thinking on the billionaires tax said: “The president is favorably disposed towards this tax, as well as a series of other options that would ensure the wealthy pay their fair share and make the price tag.”

The plan aims to clamp down on some billionaires who find loopholes to avoid or significantly lower their tax payments.

The congressional sources said the tax would apply to taxpayers with more than $1 billion in assets or over $100 million in income for three consecutive years.

Wyden’s proposal aims to lure moderate Democratic Senator Kyrsten Sinema into supporting the legislation after balking at raising tax rates on the wealthy and corporations.

House Ways and Means Committee Chairman Richard Neal sounded less optimistic about getting an agreement soon, after Biden said the social spending and climate change legislation was unlikely to include a higher U.S. corporate tax rate. Omitting the tax hike would require alternative revenue sources to pay for the legislation.

“One of the complicating factors here is that if you take up some of these new revenue measures, they’re going to have to be vetted,” Neal, whose panel oversees tax policy, told reporters. “Right now, it’s hard to go back and revisit all of that.”

The “Build Back Better” and infrastructure bills are at the heart of Biden’s domestic agenda and could provide signature legislation to bolster both his presidency and Democratic hopes of retaining control of the House and Senate in the 2022 elections. Democrats hold razor-thin majorities in both chambers.

Biden, who took office nine months ago, said at a CNN town hall event in Baltimore on Thursday that he was close to striking a deal to pass both bills, after weeks of bickering among his fellow Democrats.

“I do think I’ll get a deal,” the president said.

Moderate Democrats, most notably Sinema and Senator Joe Manchin, had objected to the original $3.5 trillion price tag and some provisions of the latter bill. Republicans oppose the measure, but 19 in the Senate voted in support of the infrastructure legislation.

Upstream industry ‘too optimistic’ on how long energy transition will take: Aramco CEO

Upstream industry ‘too optimistic’ on how long energy transition will take: Aramco CEO