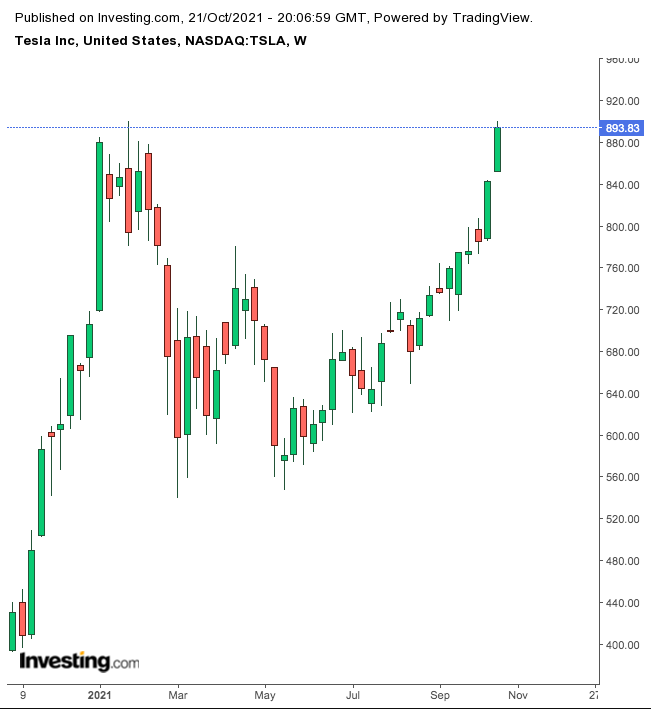 The results mark the ninth straight quarter of profit for Tesla. During the period that ended Sept. 30, its sales rose 57% to $13.8 billion, while per share profit rose to $1.86 a share on an adjusted basis, beating the $1.67 a share average of analysts’ estimates.

Wall Street analysts were particularly impressed by the California-based automaker’s strong margins amid a global supply-chain crunch that has crippled the auto industry. The company’s automotive gross margin came in at 28.8%, and its operating margin was 14.6%.

But a strong third-quarter failed to fuel further gains in the electric car-maker’s stock, which fell as much as 2% in early trading Thursday, a sign that the shares may take a breather after more than 50% rebound from the lowest point this year. Tesla closed Thursday at $893.70, up 3.22% on the day.

One possible explanation of this muted reaction in the market came from Tesla itself, as it warned that the supply-chain disruptions could impact its ability to ramp up production in the remaining part of the year. Tesla Chief Financial Officer Zachary Kirkhorn said on an analysts’ call:

“Due to parts shortages and logistics variability, we have not been able to run our factories at full capacity. Customers are having to wait longer for vehicles.”

Kirkhorn, in a Wall Street Journal report, said the company needs to continue pushing to lower outlays given rising commodity and labor costs.

“We have to overcome cost increases that are outside of our control.”

In addition to supply-chain obstacles, Tesla’s high valuation leaves little room for less-than-perfect execution. Tesla’s shares are very much reflecting that strength after a very powerful rally in the past quarter.

Going forward, it could be a slow and gradual move higher, given the fact that Tesla has become the most expensive stock on the NYSE FANG+TM index.

Bernstein, which has an underperform rating on Tesla, said in its note yesterday that investors should play Tesla trade with caution.

“We continue to struggle to justify TSLA’s valuation, which is higher than all other major automakers combined and appears to imply huge volume and industry leading profitability going forward, which is historically unprecedented.”

“Despite the arguably encouraging 3Q results and TSLA’s continued execution, we have trepidation that TSLA stock may already be priced to perfection such that near-term earnings beats may be insufficient to get bulls incrementally positive on the stock.”

Tesla produced a very impressive Q3 report that shows its superior production capabilities when compared with other makers. But this performance failed to lift the stock, mainly due to concerns that the company won’t be able to escape the negative impact of global supply-chain disruptions and higher costs going forward.